Wazalendo Savings and Credit Cooperative Society (WSACCO) has donated 30 wheelchairs to its members in the Chieftaincy of Mubende Rehabilitation Centre (CMRC), who have special health needs under its Corporate Social Responsibility (CSR) function.

The donation is in line with WSACCO’s objective of improving the welfare of its members and in fulfilment of one of the key principles of the Cooperative’s “Concern for the Community”.

The CMRC Director of Personnel and Administration (DPA) Col Stephen Kalasanyi, who received the donation of 30 wheelchairs on behalf of the Chief of Mubende Rehabilitation Centre Brig-Gen Moses Kwikiriza, applauded WSACCO for the good Cooperation and the continued support it has always rendered to its members with special needs at MRC.

He also called upon the members who received the chairs to utilize them well. Col Kalasanyi acknowledged the challenge of the administration to provide wheelchairs to all those in need, because the numbers of those still in need of the service is still big.

“By giving us such expensive items to the administration of CMRC, you have given us morale and demonstrated that surely WSACCO thinks about its members. The remaining challenge is now for us to partner with WSACCO to deal with financial indiscipline such as multiple loans and exploitation of our people by other financial institutions and money lenders whose lending rates are high,” noted the DPA.

The Chief Executive Officer WSACCO, Col Joseph Freddy Onata while handing over the items on behalf of the Chairman Board of Directors, Maj Gen Sam Kavuma said that the SACCO is delighted to stand together with the members of CMRC in addressing welfare issues.

Col Onata emphasized proper usage and maintenance of the chairs in order to enable the them serve members for a long period and to improve their mobility.

He urged the members to fully utilize the cash branch recently extended by WSACCO to them by saving and borrowing for purpose, in order to improve their welfare.

“WSACCO’s main objective is to enable you the members to continuously save and accumulate your savings in order to develop and avoid being exploited by loan sharks. We can utilize our internally generated savings and borrow internally to pursue our development goals”, said Col Onata. 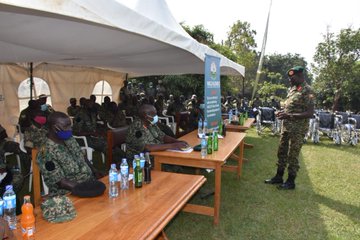 The CEO also encouraged members to save more because such savings will help them to plan for life after retirement.