PRETORIA: On 16th September 2022, Amb. Paul Amoru, the High Commissioner of Uganda to Pretoria, held a meeting with Hon. Mashego Dlamini, Deputy Minister of International Relations and Cooperation of the Republic of South Africa, at the latter’s office.

Hon. Dlamini welcomed the High Commissioner to South Africa in general but particularly to her Ministry expressing that her office is always open for consultation. She wished him a successful tour of duty and invited him to visit many areas in South Africa, especially the rural countryside.

She said the issues of trade and investment are critical and there is a need to address all challenges that may hamper the expansion of our cooperation and that the way forward is to implement all signed bilateral agreements, review dormant ones as well as explore new areas of cooperation.

The Minister observed that South Africa is equally encouraged by Uganda’s active engagement to strengthen bilateral cooperation with other countries.

She noted that together Uganda and South Africa can exploit new opportunities presented by the post-COVID-19 pandemic globally. 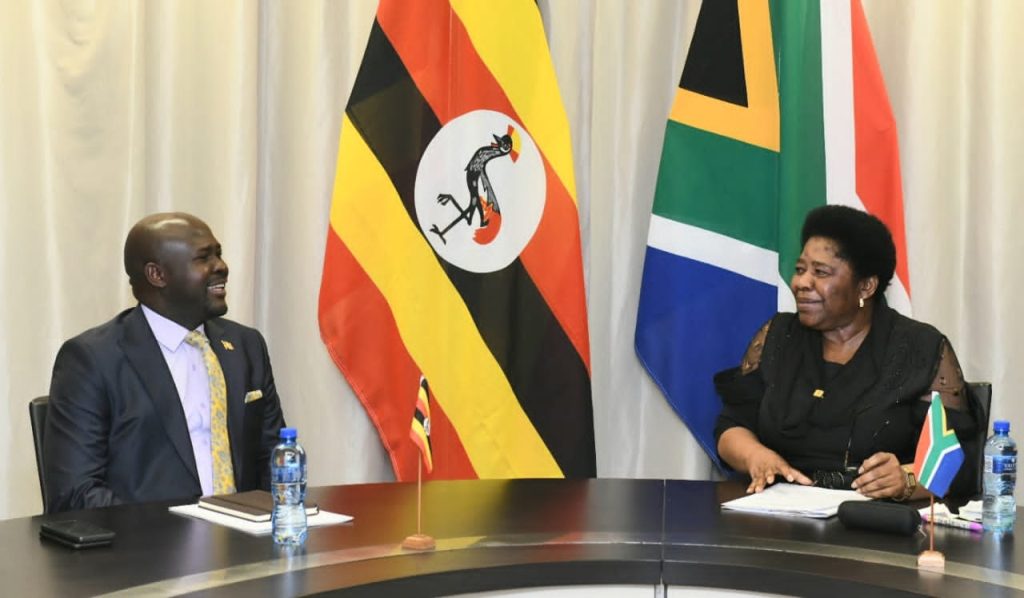 In return, Amb. Amoru thanked the Minister for hosting him. He revealed that his posting to Pretoria came at a critical time when Uganda was hosting the 2nd JCC – where he held key engagements with senior officials across different sectors and departments from Uganda and South Africa during the JCC conference.

Amb. Amoru further briefed the Minister about the tours to ESKOM-operated electricity generation plants in Jinja, and as well as to the OR Tambo School of Leadership in Kaweweta, where an ANC camp was hosted from the late 1980s to early 1990s and 14 fallen ANC comrades who were laid to rest. A statue in honor of former President Nelson Mandela was also unveiled at Uganda’s national stadium in Kampala.

The Ambassador appreciated the warm welcome extended to him by the hosts upon arrival as well as the timely presentation of his letters of credence to the President of South Africa. 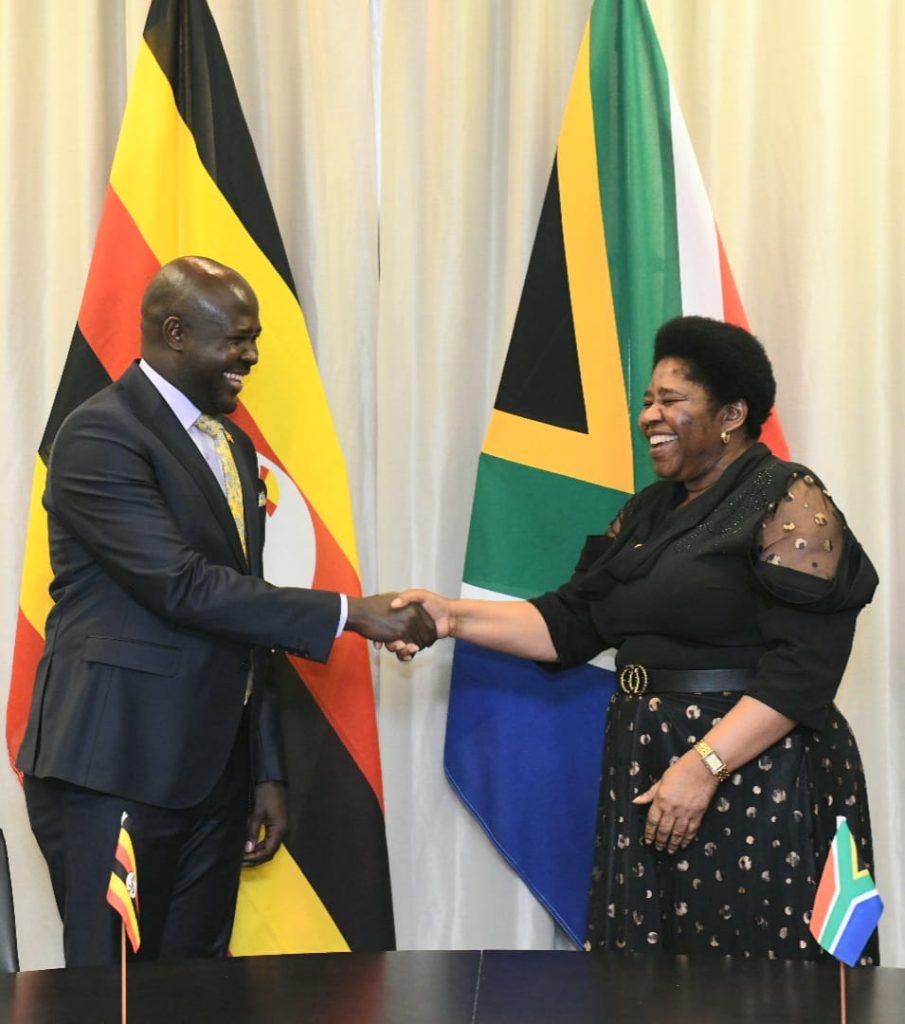 He noted that the Mission recently held a meeting with the Directorate of EAC which largely focused on the implementation of the outcomes of the JCC and the invitation of H.E President Museveni for a State Visit to South Africa. Amb. Amoru reiterated Uganda’s commitment to implementing the outcomes and decisions taken at the 2nd JCC held in Kampala last July.

Amb Amoru said he will focus on Economic and Commercial diplomacy aiming at further boosting trade and investment between the two countries. He also appreciated the acceptance of the resumption of Uganda Airlines commercial direct flights to Johannesburg which in turn will boost trade and deepen the people-to-people relations and cooperation.

Amb. Amoru also used the opportunity to seek South Africa’s support for Uganda’s candidature for re-election to the International Telecommunications Union Council for the period 2022-2026 at an election scheduled during the Plenipotentiary conference from 26th September to 14th October 2022 in Bucharest, Romania. 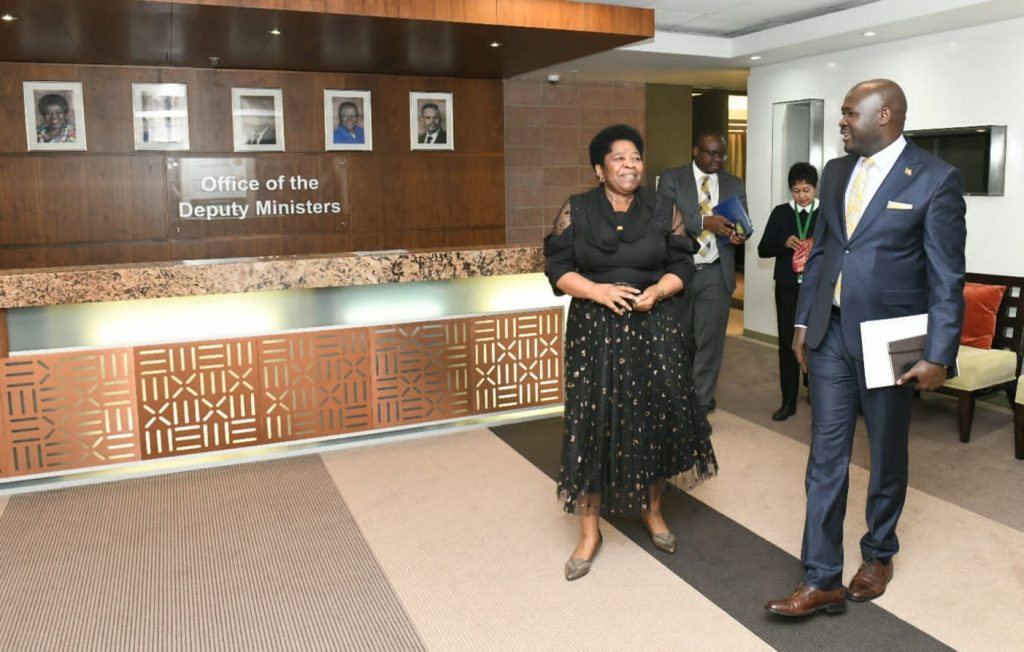 The Ambassador briefed the meeting on new developments in the East African region. These included DR Congo joining the East African Community after signing the Treaty of Accession and the associated benefits, the graduation of the first batch of unified armed forces of South Sudan and the successful national elections in Kenya.

In return, the Minister briefed the meeting on updates in the SADC region. These included the insecurity in Mozambique, the political and cultural developments in Eswatini, and the upcoming national elections in Lesotho.