After almost two years of having the arts and culture sector locked down, President Yoweri Museveni finally opened the Arts and Culture Sector during his end of year 2021 national address.

As a government agency in charge of the sector, the Uganda National Cultural Centre (UNCC), on Friday 18, organized an official opening ceremony to celebrate the reopening of thr sector at The National Theatre.

Speaking at the event as the chief convenor, the Minister of State for Elderly Affairs, Dominic Gidudu, noted that as a mother ministry (ministry of gender, labor and social development), they are happy the sector has officially opened.

Gidudu explained that the reopening was prolonged in order to save lives and curb the spread of Covid-19, given the nature of the Arts and Culture sector, which is a social sector.

“I thank you for your patience, two years without working is not an easy thing, but our sector remained closed for our own safety, given the nature in which it operates with a lot of socialization,” The minister who represented the Gender, labour and Social Development Minister, Betty Amongi, said.

The Ambassador of France to Uganda, Jules-Armand Aniambossou, pledged France’s support to the Arts and Culture Sector in Uganda. 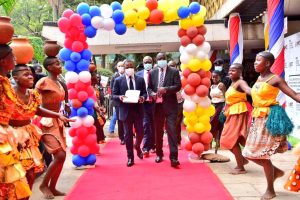 He said a number of projects and trainings have been facilitated and supported by the embassy through the FSPI fund which is under the FSPI Culture Project (Solidarity Funds for Innovative Projects).

These are aimed at strengthening the capacities of operators to structure the cultural ecosystem in Uganda.

The UNCC executive Director, Francis Ojede, noted that they wanted to use the event to announce to stakeholders and partners that the sector is back in business.

He added, “ We wanted to acknowledge the support and loyalty of our partners and clients over the years. To share available opportunities within the sector (UNCC) for prospectus partners, To showcase artistic presentations that have come out of the partnership with the French Embassy and strategize for the sector and its contribution to national development.”

The event was also entailed with a number of acts like ‘The Buffet’, a dance piece choreographed by Grace Flavia Ibanda, featuring Tereka Desire Kenneth, Sserwanga Bernard,among others.
“The Buffet” is a meeting table of dance diversity to which dancers come with individual, unique ideas and expressions of dance.

At the buffet, time and space are offered for verbal and body movement/dance discourse and exploration of the movement unifiers of body, effort, time, space, and relationships.

COBWEB, a theatre play written and directed by Loius Muhereza.

These were followed by other activities which included a tour of the UNCC facility and the new developments, exhibitions, and the awarding of certificates to participants of the previous enhancement skills workshops.

Musiitwa noted that the three acts were products of the enhancement skills training workshops, which were conducted with funding from the French Embassy between November 2021 and January 2022. 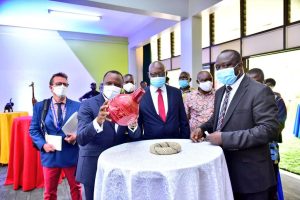 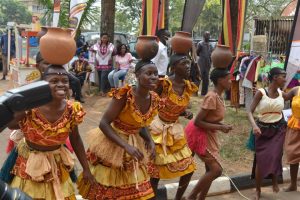 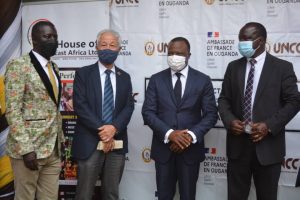 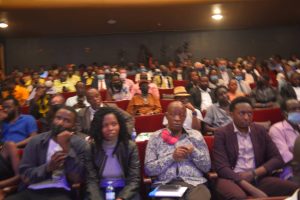