President Yoweri Kaguta Museveni has said that Uganda and Africa in general is interested in nuclear energy (electricity) and not nuclear weapons.

“For us, we want that power for electricity, for agriculture and not for nuclear weapons,” he said.

President Museveni was speaking during a meeting with a delegation from the International Atomic Energy Agency, led by the Director, Division of Nuclear Power for Africa, Ms. Aline Des Cloizeaux. She was accompanied by Mikhail Chudakov  the Deputy Director General and Head of the Department of Nuclear Energy and Mehmet Ceyhan from the same Agency.

The meeting which was attended by the State Minister for Energy Hon. Okasai Sidronius Opolot took place yesterday, Monday 09th May 20122 at State House Entebbe.

According to a brief to the President, Uganda has so far trained 22 people at the level of Master’s degree in nuclear science.

President Museveni said that the country would soon start a school that will train the lower cadres in the field of atomic energy and thereafter embark on building the first ever Atomic Energy plant in Uganda.

“Am glad that you are satisfied, that we are doing what is required,” Museveni said, adding, that the reason Uganda is going for nuclear energy is because the hydropower sources are not sufficient. 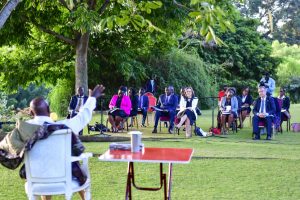 Meanwhile, Aline Des Cloizeaux, the Director, Division of Nuclear Power for Africa, handed over to the President a mission report on the Integrated Nuclear Infrastructure Review (INIR), phase one.

Ms. Aline Des Cloizeaux thanked President Museveni for finding time under his busy schedule to meet them and discuss the Mission report for phase one.

“Thank you for welcoming us to present the report of phase one despite your busy schedule. We commend Uganda’s cooperation throughout the first phase,” Ms. Aline said.

Ms. Aline said that the International Atomic Energy Agency (IAEA) has come up with recommendations, for Uganda to start building and production of nuclear power.

“The first phase, we have concluded that Uganda is ready for the plant. We in the agency, we are ready for all the support through training etc. so that the project becomes reality,” she said.

Aline commended Uganda’s commitment to building and producing nuclear power. Their Mission, she said, is to help and enable the member countries to have a safe and secure plant.

The Minister of State for Energy, Hon. Okasai Sidronius Opolot said that through the technical cooperation with the International Atomic Energy Agency, Uganda adopted the IAEA milestone phased approach for the development of national infrastructure for nuclear power.

Okasai revealed that the Nuclear Power Plant (NPP) site has already been identified including acquisition of land to host the 2000 MW nuclear power plant capacity.

Cabinet in April 2015 approved the Nuclear Power Roadmap Development strategy 2014-2016 to guide the development of the nuclear infrastructure in Uganda.

The strategy established the Nuclear Energy Program Implementing Organization (NEPIO), which makes use of the existing expertise within government Ministries, Departments and Agencies.