Very rarely does someone influential or ordinary citizen engage in a protest without the approval of the Police and they survive getting arrested. Many people among them politicians, activists, students, citizens and other groupings have been arrested amidst their demonstrations to voice their concerns.

But Kyadondo East Member of Parliament, Robert Kyagulanyi alias Bobi Wine survived arrest by a whisker on Wednesday morning when he narrowly got dragged into a police truck.

Business in downtown Kampala city centre got paralyzed as Bobi Wine together with other musicians and journalists protesting the recently introduced taxes on Mobile Money and social media held a demonstration. He was accompanied by singers A Pass, Hilderman as well as NTV news anchor Joel Senyonyi and NBS reporter, Raymond Mujuni.

All clad in red attire some written on ‘This Tax Must Go’, they suddenly disembarked from a vehicle near the Old Taxi Park in downtown Kampala amid cheers by unsuspecting onlookers.

For the better part of Wednesday morning, journalists tossed from one location to another, from Kamwokya, to Hotel Africana and finally to downtown as information regarding where the protest march would begin drastically changed. It appeared these were all attempts by the protesters to avoid Police busting their plans.

With arms enjoined, they began to walk towards the Constitutional Square where they intended to hold their protest and address the press. One after the other, members of the public, many of them youth joined Bobi Wine while chanting ‘People Power, Our Power’.

It was until the swelling group approached Pioneer Mall, that a group of Police officers approached and accompanied them towards the Constitutional Square.

But armed security presence heightened at the Constitutional Square. Here, the DPC for Central Police Station, ASP Joel Bakaleke and other officers engaged in a scuffle with the protesters as the Police officers attempted to arrest Bobi Wine and his colleagues.

Police fired several rounds of live ammunition and teargas to disperse the crowd that had begun to block traffic along Kampala road. Bakaleke and other Police personel forcefully tried to drag Bobi Wine and the others into an awaiting Police truck with no success.

“My brother, am not fighting you. I am fighting for you,” Bobi Wine pleaded with Bakaleke but the unrelenting DPC continued to pull the singer’s arm.

However, youths wearing red t-shirts pulled Bobi Wine to save him from the Police until they overpowered them and ran away with him. Police fired more rounds of live bullets and teargas as everyone scampered for safety.

The Kyadondo East legislator ran back towards Mutaasa Kafeero Plaza near Pioneer Mall where he climbed on a parked taxi and started to address cheering onlookers.

“This country belongs to us. And we are saying no to these taxes on social media and mobile money,” Bobi Wine told the crowd.

His address would shortly be interrupted by Police officers who were running towards his direction. Fearing to get arrested, Bobi Wine charged towards William Street and disappeared in Kiyembe.

In Kiyembe, Police officers spent almost 30 minutes combing shops and toilets in search of the musician in vain. Traders who had started collecting at their verandahs mocked officers chanting “You are not taking Bobi anywhere”. 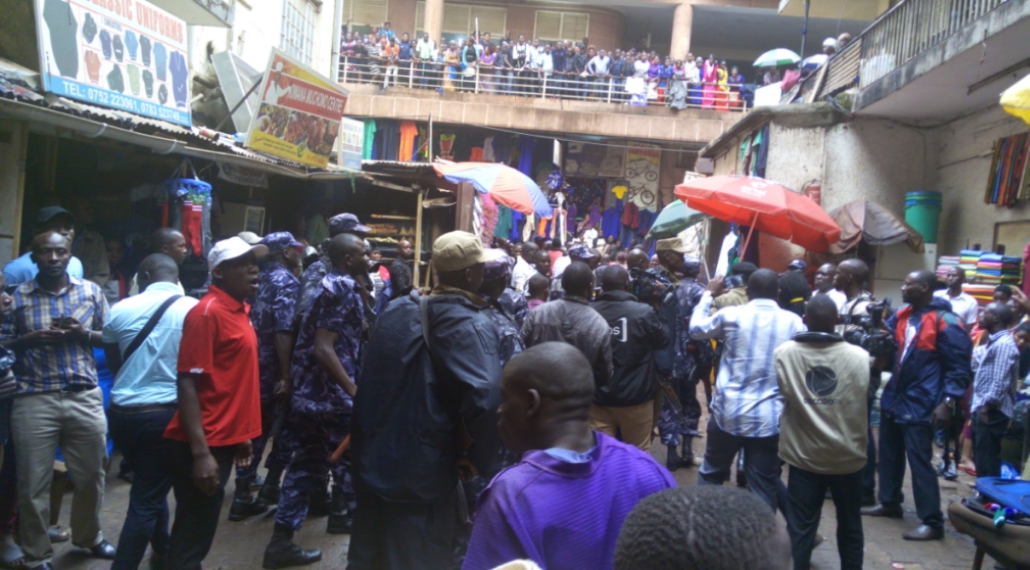 Some of the traders including mobile money agents who spoke to the press supported Bobi Wine’s cause saying that the tax burden has become unbearable for the ordinary Ugandan. One of them said the new 0.5% tax on Mobile Money transactions was rendering many young people jobless.

When the scene was clear of Police officers, Bobi Wine who had changed his attire and wore a cap emerged amidst deafening ululation from traders.

Whereas he had successfully sent Police on a wild goose chase, the running battles were far from over. Bobi Wine now made his way through the corridors in Kiyembe, back to Kampala road, he ran towards Speke Road and made his way to Parliament where he lost the officers that had been trailing him.

At least two individuals were arrested during the protest but we hadn’t verified their names or if there were more by publication time. 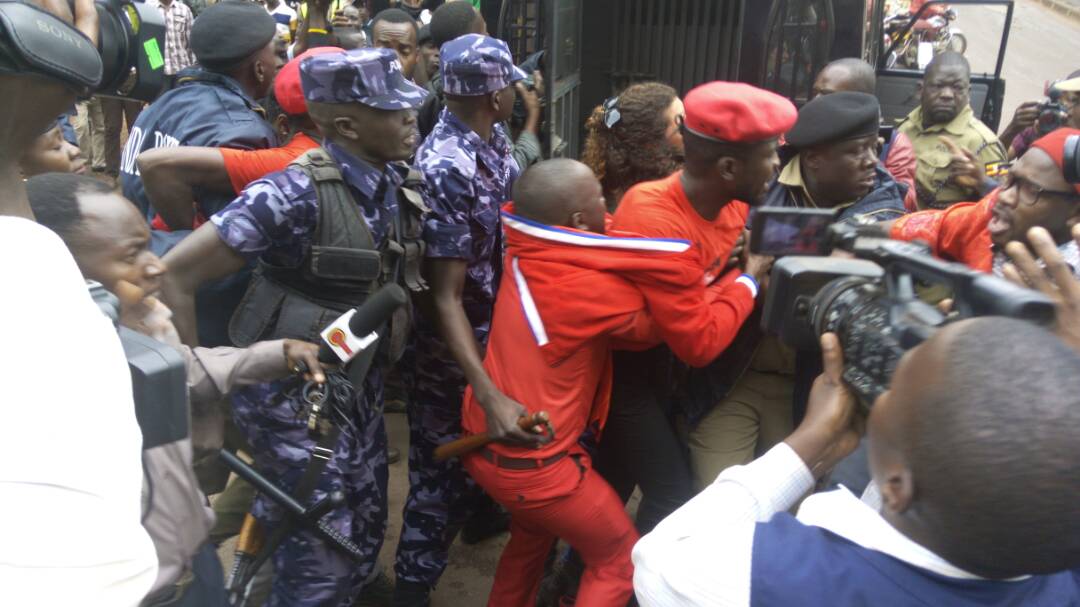 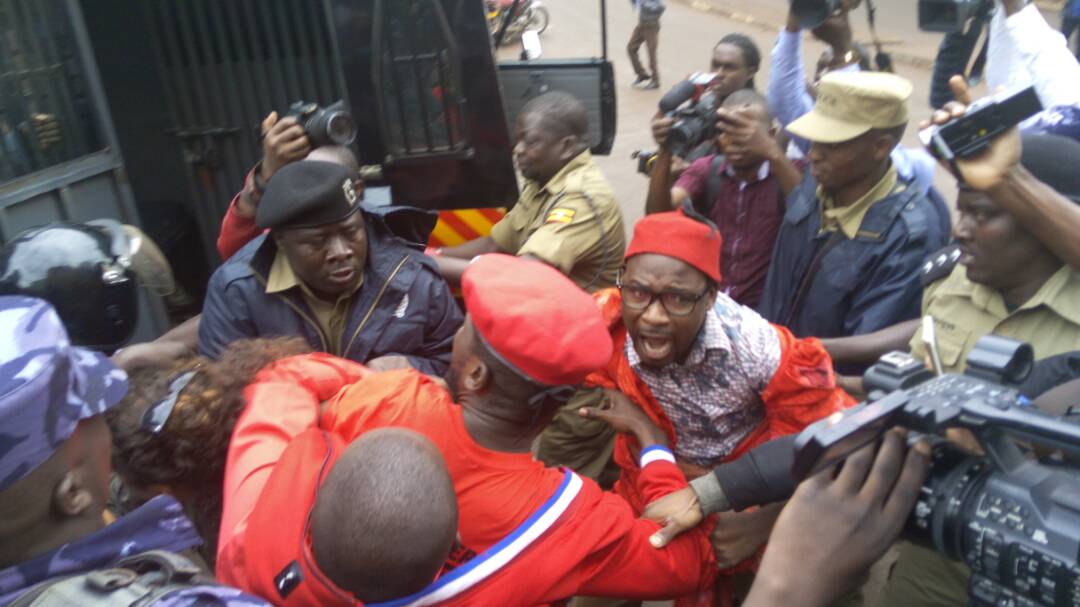 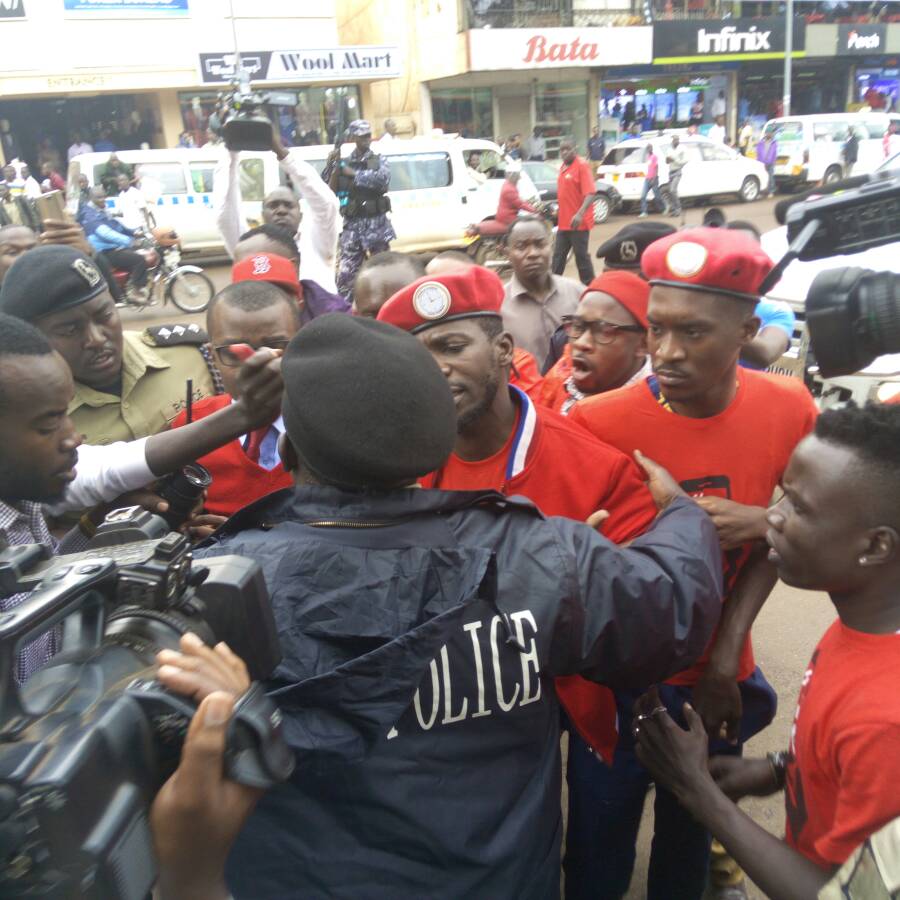 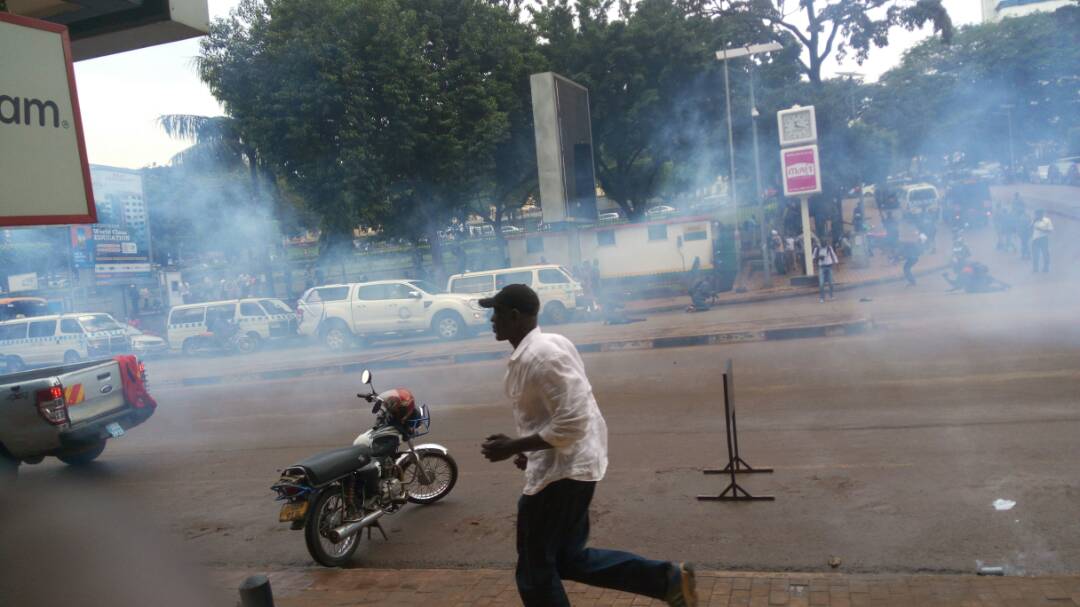