That was one of the last statements made by the late former Speaker, Jacob Oulanyah while chairing a plenary sitting on 24 November 2021, after the passing of the National Social Security Fund Bill.

During the same sitting, Parliament passed a motion for a resolution to pay tribute to the Uganda Netball team, the She Cranes for their outstanding performance at the 10th Africa Games 2021.

In response to the statement by the Minister of State for Sports, Hamson Obua who moved the motion, Oulanyah said, “Thank you very much. The honourable minister said “by the grace of God, we shall accomplish”.

The body was received by the Speaker, her Deputy, the Vice President, LOP and Prime Minister

The casket was received by the Vice President, Jessica Alupo, Speaker, Anita Among and her Deputy Speaker, Thomas Tayebwa in Parliament.

A procession that joined Parliament Avenue from his home in Muyenga, was led by the Acholi cultural dancers, performing the Bwola dance, a dance that Oulanyah was fond of and often danced along whenever he got the opportunity.

The Bikers Association, of which Oulanyah was a member, was part of the procession, as they cleared the way on their gigantic bikes.

Lawmakers and staff of Parliament including well-wishers, adorned in black and white, with bowties and holding placards in honour of Oulanyah queued beside the red carpet covered with petals to welcome Oulanyah back home.

“You did not prepare us for this, Rt. Hon. Jacob L’Okori Oulanyah!” read one of the placards.

“For the love you had for the common man, we will forever miss you,” read another placard.

The mood in Parliament is somber, and some mourners were unable to hold back their tears when the casket was moved to the House, where a special sitting is being held for lawmakers to pay tribute to Oulanyah. 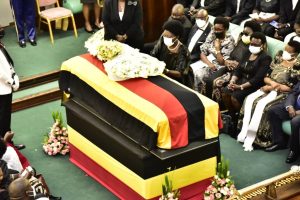 The sitting will be attended by Oulanyah’s family, visiting delegations and other notable government dignitaries.

The fallen Speaker’s body will spend a night in Parliament where a vigil will be held, before he is moved to Kololo ceremonial grounds on Wednesday, 06 April 2022 where national prayers will be held.

Oulanyah will be buried on 08 April, 2022 in his ancestral home in Lalogi, Omoro district. 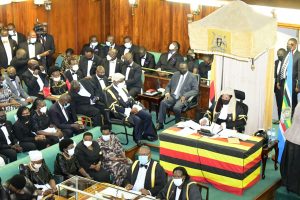 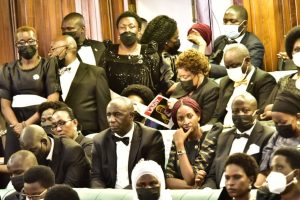