Celebrated Nigerian Singer, Tiwa Savage is set to perform in Uganda on April 22, 2022.

The concert organised by Jos Global events will happen at Lugogo Cricket Oval.

The artist, last performed in Kampala in 2015. At the time, she was pregnant but managed to display an energetic performance.

The artist is famously known for bangers like Wanted, Love Me, Kele Kele Love among others.

Savage relocated to London at the age of 11 for her secondary education. Five years later, she began her music career doing backup vocals for artists such as George Michael and Mary J. Blige.

After participating in the UK edition of The X Factor and graduating from Berklee College of Music, Savage signed a publishing deal with Sony/ATV Music Publishing in 2009. 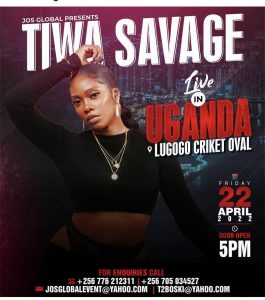 She moved back to Nigeria and signed with Mavin Records in 2012. She made an appearance on the label’s 2012 compilation album Solar Plexus.

Her debut studio album Once Upon a Time was released in July 2013. It was supported by seven singles: Kele Kele Love, Love Me, Without My Heart, Ife Wa Gbona, Folarin, Olorun Mi, Eminado, among others.

The album was nominated for Best Album of the Year at the 2014 Nigeria Entertainment Awards and for Best R&B/Pop Album at The Headies 2014. Savage’s second studio album R.E.D was released on 19 December 2015.

In 2014, Tiwa Savage was the first female Nigerian artiste to be nominated for BET awards.

In November 2018, Savage won Best African Act at the 2018 MTV Europe Music Awards, becoming the first woman to win the category. In May 2019, she announced her record deal with Universal Music Group and exit from Mavin Records.

Savage sings in English and Yoruba; her music is a blend of Afrobeats, R&B, pop and hip-hop.