Betty Nambooze (in wheel chair) with her lawyer, Erias Lukwago at CID headquarters in Kibuli on Wednesday. (Photo: Urban TV)

Mukono Municipality MP, Betty Nambooze has again been summoned and questioned by Police a few weeks after she returned to Uganda from India where she had been receiving medical treatment.

Nambooze on Wednesday appeared at CID Headquarters in Kibuli where she was dropped by an ambulance. She was on a wheel chair and accompanied by her lawyer, Erias Lukwago.

“Today she came here to answer that bond. We thought they would renew the bond because of the health condition but unfortunately they told us the file is already sanctioned for court,” Lukwago said to reporters.

“They say they are ready to refer her to court to take a plea,” he added.

According to Lukwago, the particulars on the charge sheet allege that the statement made by Nambooze for which she was arrested was intended to incite members of the public to murder government officials. This is contrary to Section 21 (1) of the Penal Code.

The charge sheet a copy of which SoftPower News has obtained which was received to the Resident State Attorney at Nakawa Magistrate’s Court states that “Nambooze on or about the 9th day of June 2018 by utterings and postings in the media incited the public to attack government public figures however well guarded since the government could not secure them”.

She is due to appear before the Nakawa Chief Magistrate’s court on Wednesday afternoon to be formally charged.

Nambooze was arrested on June 13 from her home in Mukono June 13 following the murder of former Arua municipality MP, Ibrahim Abiriga. She would later be released on the same day on police bond.

The following day, she was summoned to appear at SIU Kireka to make an additional statement. She was thereafter rearrested and taken to Naggalama Police Station where she was detained for days before being transfered to Kiruddu hospital after her health deteriorated.

It is from there that she was flown to India for further treatment. 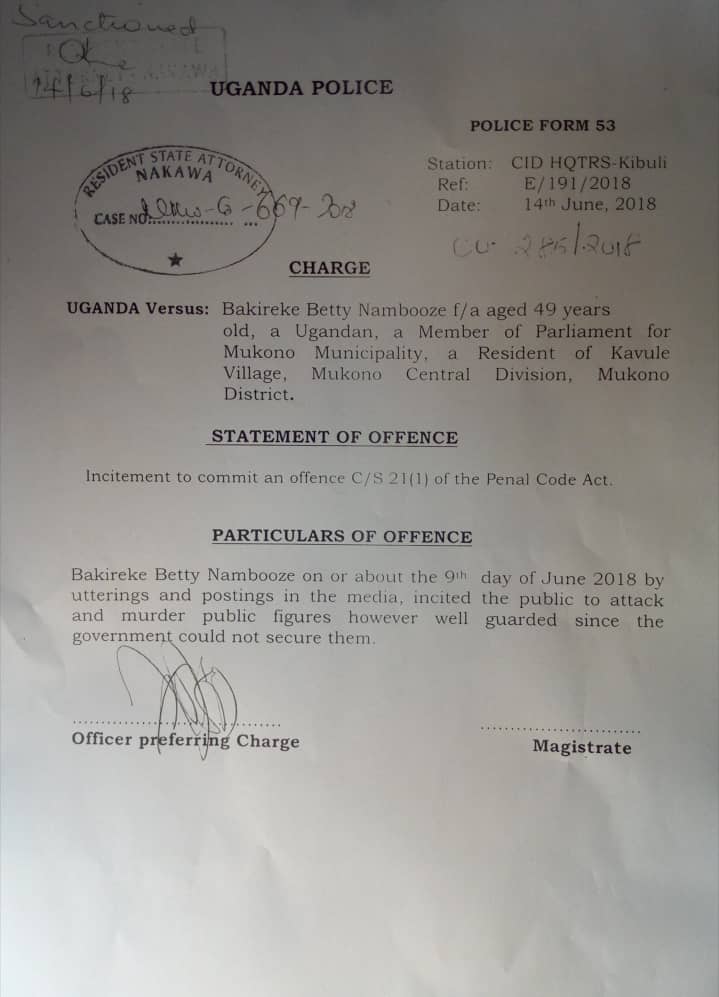