President Yoweri Kaguta Museveni has extended an invitation to the Vietnamese Leader His Excellency President Nguyen Xuan Phuc to visit Uganda next year.

While speaking to the guests at a state dinner hosted by  President Nguyen at the International Convention Center on 24th November 2022 in Hanoi, Gen Museveni delivered greetings and salutations from the forty-three million People of Uganda to the people of Vietnam.

He further informed his counterpart that Uganda will be hosting the Non-Aligned Movement (NAM) conference in November 2023 and it would be good for H.E Nguyen to attend and further cement the partnership between the two countries.

The two Presidents on Thursday witnessed the signing of cooperation documents in Education and Training, scientific and technical cooperation in Agriculture, Information Communication Technology (ICT), and Foreign Affairs to further bolster the cooperation between the two countries.

“In furtherance of that partnership, Uganda will host the conference of the Non-Aligned Movement in November 2023.  I invite Your Excellency to attend and after the Conference, Your Excellency could put aside a day or two to see what is happening in modern Uganda,” H.E Museveni said.

The Non-Aligned Movement (NAM) is a forum of 120 countries that are not formally aligned with or against any major power bloc. After the United Nations, it is the largest grouping of states worldwide and Uganda was endorsed to chair the Non-Aligned Movement on behalf of Africa for the period from 2022 to 2025. 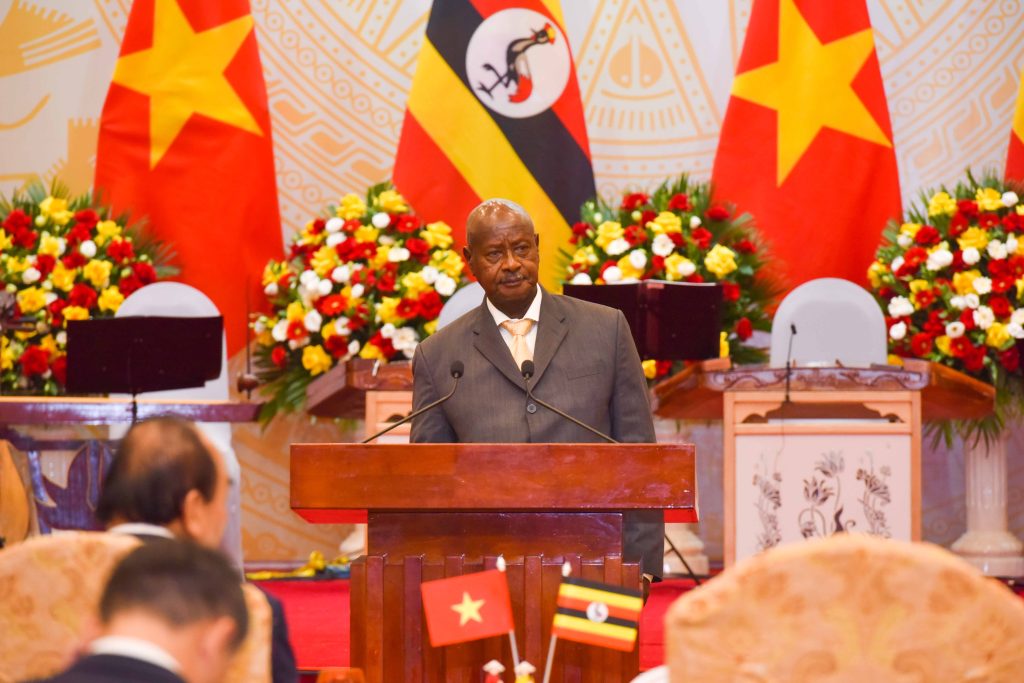 According to President Museveni, If the Asian Countries and the African Countries, respectively, work closely among themselves, but also engage in Inter-Tri-Continental cooperation, the sky is the limit.

The President, who is also the first Ugandan Head of State to visit Vietnam, saluted the heroic struggle of the People of Vietnam against the Colonialism and Imperialism of the French and the Americans. 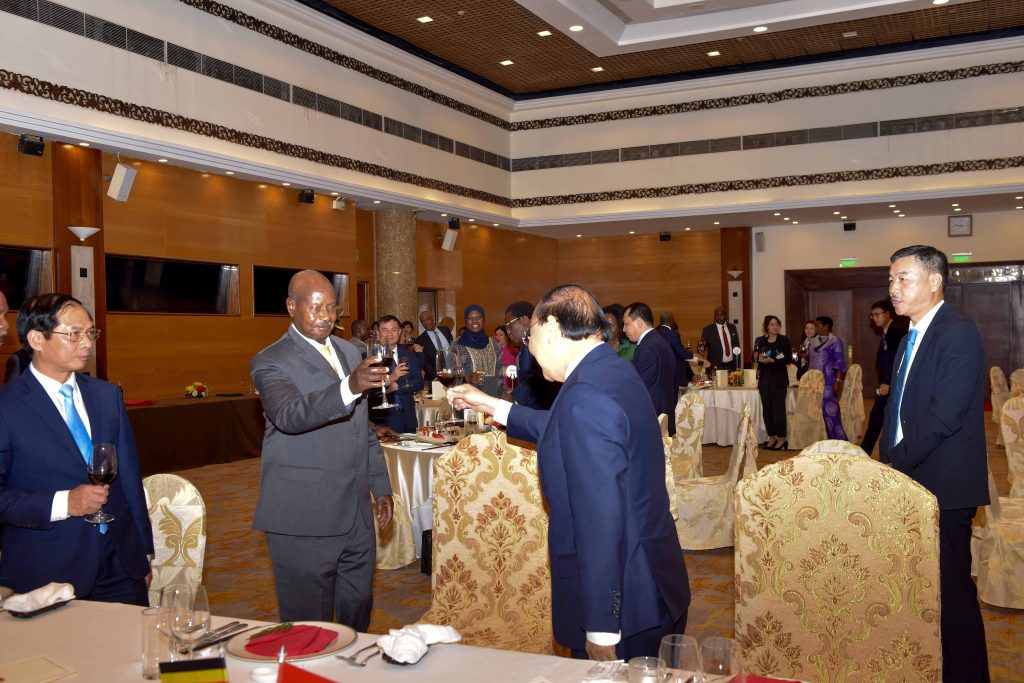 Gen Museveni who said he belonged to the 3rd generation of African anti-colonial struggles, noted that the struggles of the Asian freedom fighters in China (Mao Tse Tung), Vietnam (Ho Chi Minh), Laos, Cambodia, India (Gandhi, Nehru), Indonesia (Sukarno), etc., etc., were sister struggles to “our own (African) struggles” against what he termed as the “same pernicious enemies”.

“By 1900, the whole of Africa had been grabbed by the Colonialists from the UK, France, Belgium, Portugal, Spain, Italy, Germany, etc except for Ethiopia. These were the same enemies, you were fighting here in Asia, with the addition of the small Holland controlling the vast lands of Indonesia and Japan,” Gen Museveni said. 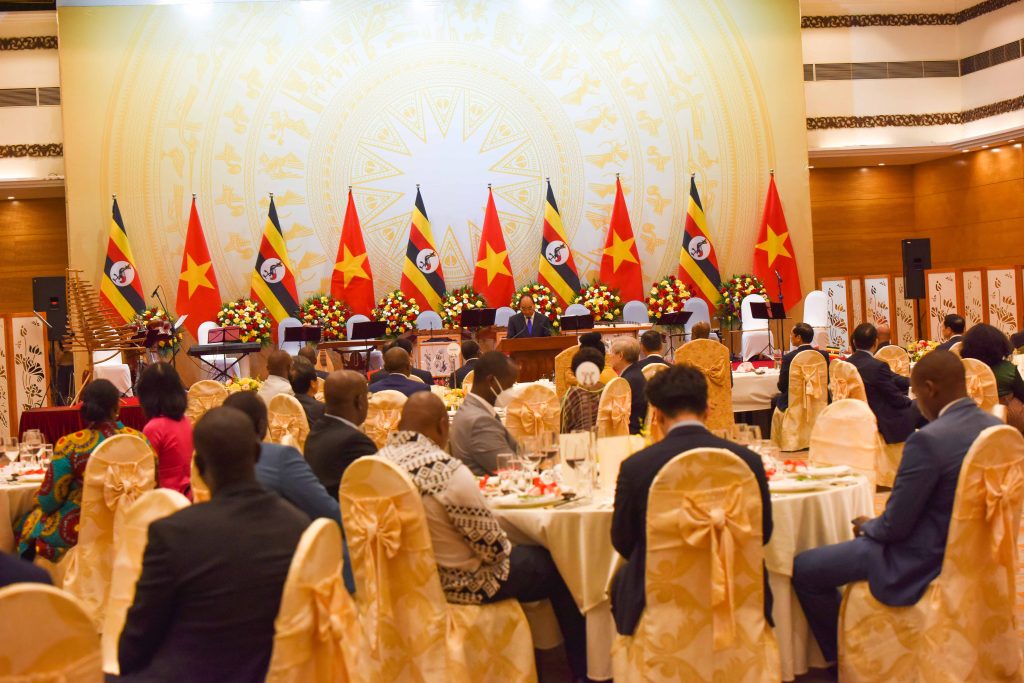 “During your struggle, we did not do much because, at that time, we were still student sympathizers of the anti-colonial struggle. We, however, formed the Uganda-Vietnam Solidarity Committee based in Mbale and Prof. Nabudere was our Chairman,” Museveni said. 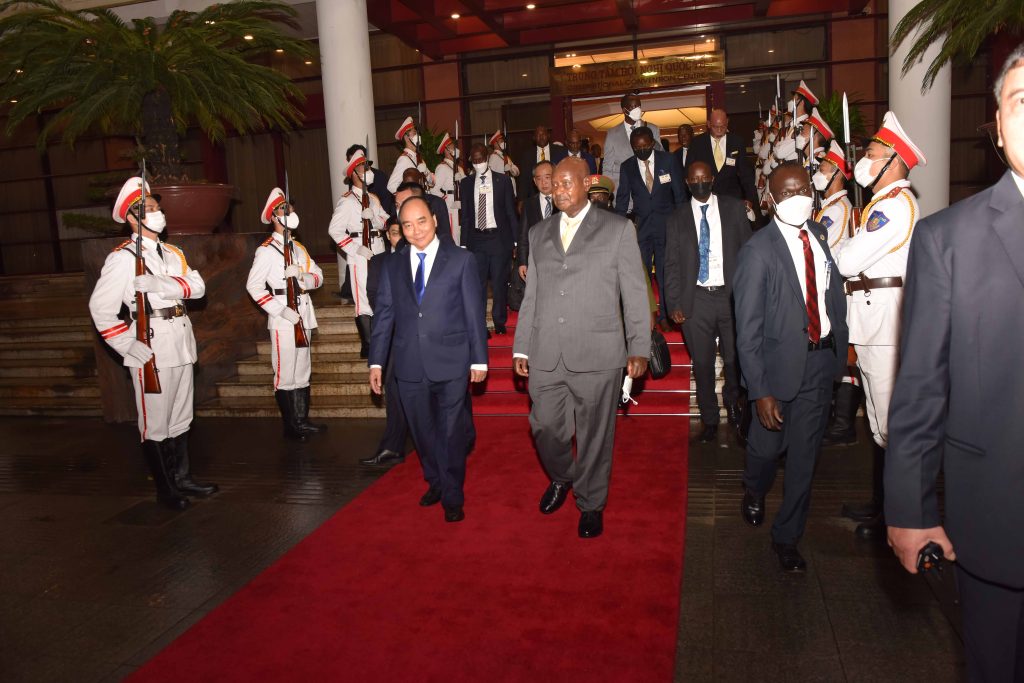 He was, however, concerned that the historic victory of the Colonized Peoples of Africa, Asia and Latin America, has, “unfortunately, not been fully utilized by the leaders of the three continents after our victories. There is a lot of potential in the Tri-Continental grouping. We have got everything,” he said, but was quick to add that after wasting about 20 years, fortunately, the African leaders realized that economic integration was crucial hence the Lagos Plan of Action of 1980.

“We now have the East African Community (Uganda, Tanzania, Kenya, Democratic Republic of Congo, Rwanda, Burundi and South Sudan) with 300 million people, COMESA with 560 million people and the CFTA (Continental Free Trade Area) with 1.3 billion People. Therefore, the market is now a bit organized or is being organized and integrated. Everybody knows what the Asian Countries have achieved individually and, sometimes, working in groups, such as ASEAN,” President Museveni said. 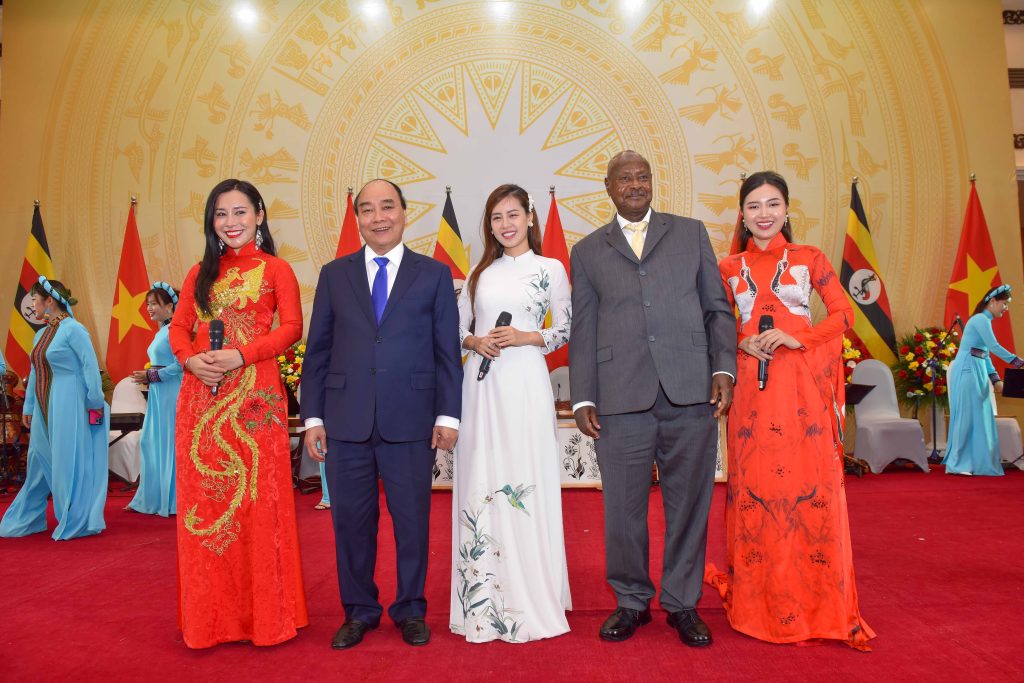 The host President H.E Nguyen Xuan Phuc, on behalf of the state and the people of Vietnam, welcomed his Ugandan counterpart with optimism that the visit will open a new era for traditional friendship and cooperation and in commemoration of Vietnam-Uganda diplomatic relations 1973-2023.

He said despite the geographic distance, Vietnam and Uganda have always shared solidarity and support for each other.

“Our party, state, government and people always treasure the support of the government and people of Uganda in our struggle for National liberation. We also remember that Mr President the then member of Uganda – Vietnam Solidarity Committee took to the streets himself to oppose the invasion of Vietnam in the 1960s. This represents invaluable assets, and whole affection and serves as a solid foundation to cement our strong political trust and foster our cooperation for development,” H.E Nguyen said.

The Vietnamese leader reflected on the past 50 years of friendship with Uganda, saying the foundation and motivation created thus far are so stronger.

He described his meeting with Mr Museveni as a productive one.

“I highly believe that the bilateral relationship between Vietnam and Uganda will enter a new phase of development more effective and substantial, serving the interests and prosperity of both countries,” he further noted, adding that H.E Museveni’s visit and the fruitful talks and the agreements signed “gives us reason to believe in the bright future in the Vietnam-Uganda partnership”. 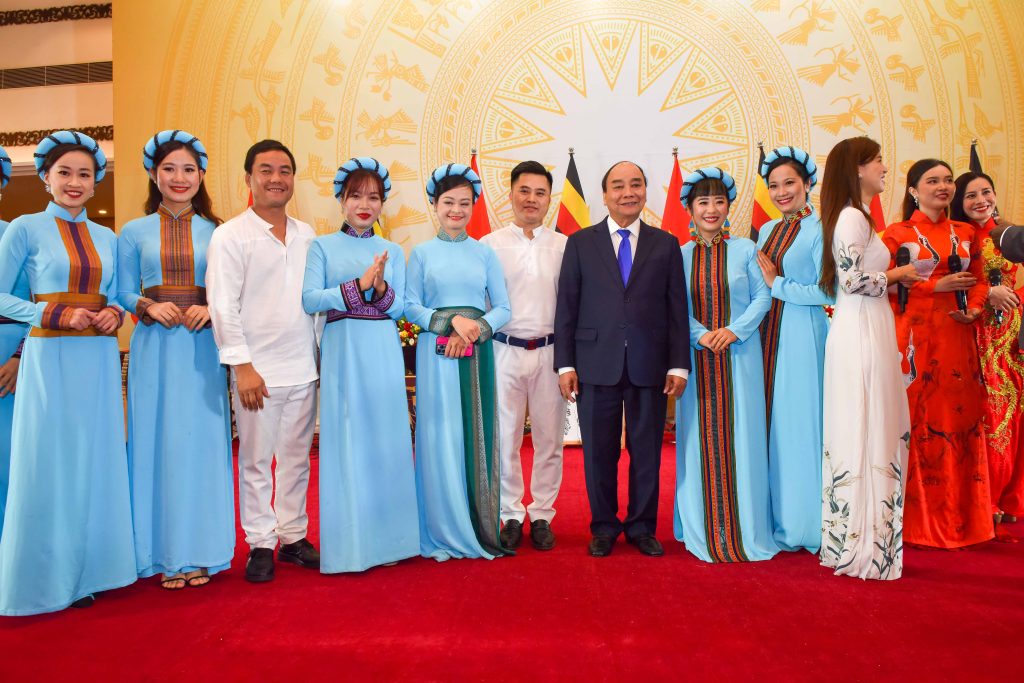 “I trust that under your able leadership, Uganda will continue to make greater successes through the implementation of Uganda Vision 2040. They will certainly turn Uganda into a modern and prosperous country and make the Pearl of Africa forever shine. Vietnam stands ready to join Uganda in fostering peace, development and cooperation in the region and the world,” H.E Nguyen said.

The two leaders proposed a toast to good health and the growing consolidation of friendship and cooperation between Vietnam and Uganda. 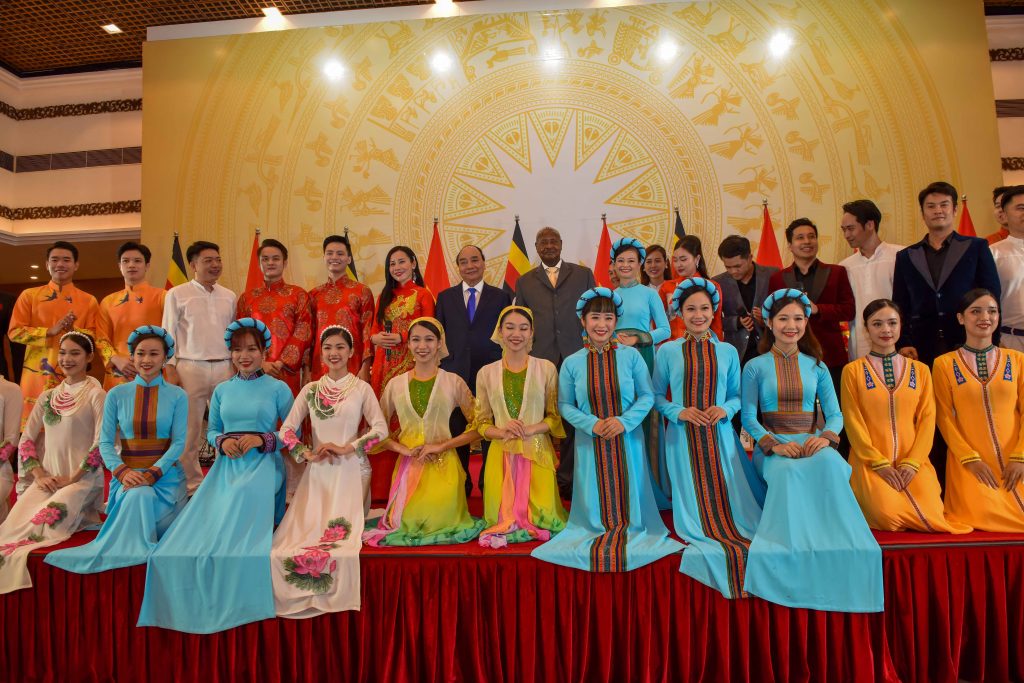