In a letter to the Vice Chancellor, Makerere University, Barnabas Nawangwe, Magara said the University Council is appalled by the violent events that have characterized the electoral campaigns for the 88th Students Guild leadership which resulted in the loss of the life of one of the young people participating in the campaign activities.

She noted that the  University Management and Council have repeatedly raised concerns about the persistent cases of indiscipline and violent altercations among members of the Students Guild and the Students Senior Common Room.

This, she said, often resulted in damage to University property and injury to University Students and staff with  repeated engagement of the student leaders at the Guild and SCR levels to address the violent behaviour but the engagements have not yielded any improvement.

The council directed that the ongoing elections for the 88th Makerere University Students Guild leadership be suspended indefinitely.

“The Makerere University Students Guild is suspended with immediate effect. This suspension includes the Guild Caretaker Government and the Students Common Room,” Magara noted in a July 14 letter.

The Council is set to convene an emergency meeting on Friday, July 15, 2022, to consider further actions to address student indiscipline and violence at the University.

The suspension follows the death of a student identified as Bewatte Betungura.

The victim was a student of Uganda Christian University (UCU) Kampala campus.

The year two student offering a Bachelor of Law had gone to Makerere to campaign for the Forum for Democratic Change (FDC) Candidate.

It is alleged that the student died following a clash between National Unity Platform (NUP) supporters and FDC supporters. 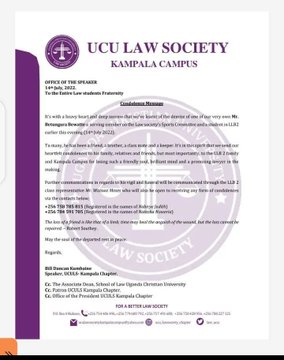