Leaders of staff Associations attending the General Assembly on Monday.

Makerere lecturers and other staff under their umbrella Associations have resolved to expand the ongoing strike to involve critical staff, claiming the partial strike has frustrated the efforts to achieve their demands.

The staff took the vote with majority supporting the proposal that the strike be extended, but this time encompassing other employees of the university.

This was during a General Assembly of the three staff Associations; academic staff, administrative staff and National Union of Educational Institutions (NUEI). The strike by staff at Uganda’s oldest and highest institution of higher learning, which began with the new Semester, has Monday entered its 24th day.

Key among the concerns raised during the Assembly on Monday was the fact that the ongoing industrial action has fallen short of unison among the staff, since some lecturers continue to teach. Some argued that such a scenario only serves the interests of the Management which could be why it hasn’t taken their grievances seriously.

They also said that a partial strike makes those who have laid down their tools susceptible to individual penalty.

While the MUASA Vice Chairman, Prof Edward Nector Mwavu merely labeled those that are anti-strike as “traitors” and said they are at liberty, some members insisted it undermines MUASA and sets a bad precedent.

Members also agreed that the critical staff like the health workers, security cleaners, and administrators who were initially exempted from the strike due to their work, also lay down their tools.

They insist that the University Management reistantes MUASA Chairman, Dr Deus Kamunyu Muhwezi who was suspended by the Vice Chancellor last month, along with two other leaders of the administrative staff Association who were suspended last year.

During last week’s Joint Assembly of staff Associations, the Vice Chancellor (VC), Prof Barnabas Nawangwe pronounced “a new chapter of mutual respect”, in what was seen as a gesture of good will. He also exchanged a handshake and hug with Dr Kamunyu.

However, staff are concerned that the so-called new chapter has not yielded anything progressive.

The further watered down a letter by the VC dated February 6 to the leaders of MUASA, MASA and NUEI concerning restoration of normalcy at the university.

“This is to affirm the position reached between the Management and the leadership of the three staff Associations at the meeting held on 4th February 2019, to start a new chapter of mutual respect and take our university to greater heights as one family,” Prof Nawangwe wrote.

“I urge the three staff Associations to play their rightful role in restoring normalcy in the university to enable all of us to move forward as a proud premiering university,” the short letter added.

The letter, according to majority of members who attended Monday’s Assembly lacks both substance and assurances on the current impasse.

Another concern that was prominent during the deliberations was the sticky issue of the two Council members; Bruce Balaba Kabaasa and Thomas Tayebwa whose whose appointment to Council is contested by staff.

The Assembly heard that Kabaasa was recently appointed to the Appointments Committee in another show of defiance by the university Administration. Staff insisted that the two be dropped from the Council.

On this matter, Prof Jean John Barya, a law don at the University advised that legal action be taken since Council is unlikely to honour the demand to drop the two. 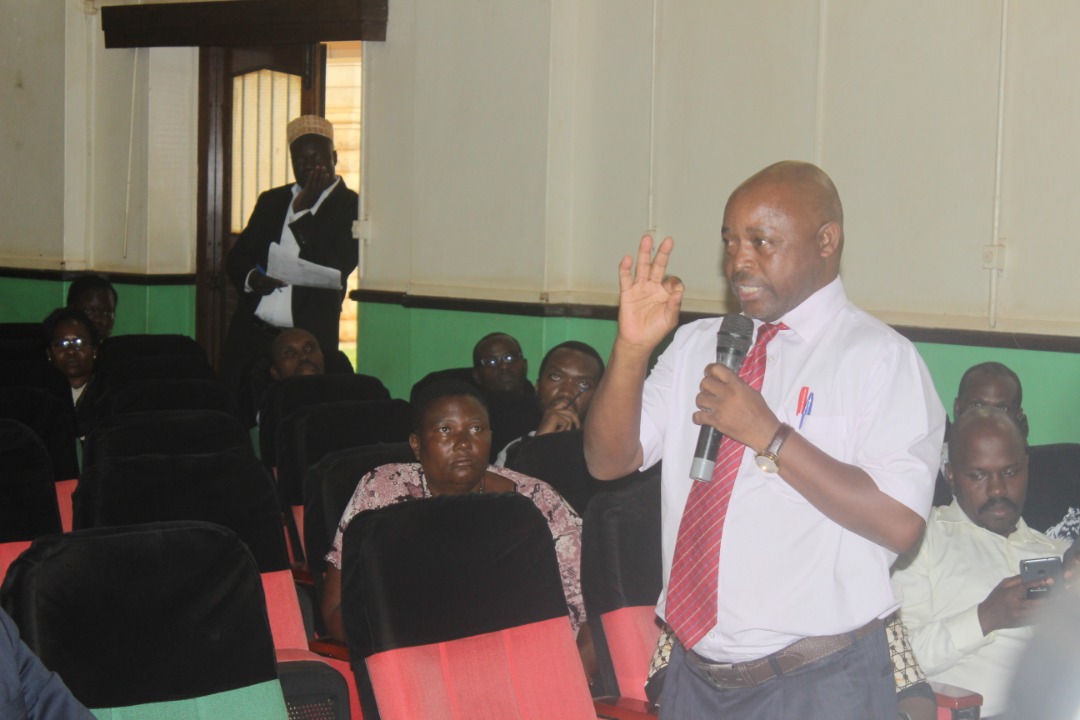 “The issue on the Human Resource Manual can be easily challenged in court. The issue of Tayebwa and Kabaasa can also be handled through courts of law, because we don’t expect Council itself to remove these members,” he said.

Like the School of Law recently advised in its legal opinion on the stalemate, Prof Barya maintained the suspension of the Association leaders was illegal and so was the committee that was