A historic event, in the sense it was the first of its kind in the Kingdom and the region at this scale.

As a way of uplifting the household incomes and lives of Busoga Youths, the Kyabazinga through his organization of GABULA ROYAL FOUNDATION, with support from the Busoga Kingdom, has embarked on a massive skilling program for the unemployed youth throughout Busoga.

The program which started about two and half years ago has so far benefited over 10,000 youths and a few adults and is aimed at targeting those at the grassroots who may have lost opportunities in direct formal education. 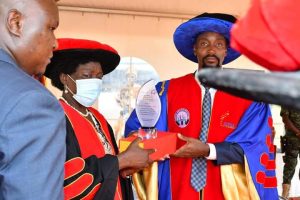 The skilling program is being run in partnership with Hills company led by Mr Kamira Sulait with support from DIT which examines the learners at the end of their 5, 9 or 12 months of training.

Other partners are Movit, Darling, and a huge number of individual donors and volunteers.

Speaking as “Chancellor” and Chief Guest at the graduation ceremony held at Mayuge district headquarter grounds, the Kyabazinga was pleased by the huge number of youth who have embraced this program and together with their parents or guardians have put in efforts to complete the training and turn up for graduation.

He thanked the coordinator of the program and the Gabula Foundation CEO for a job well done and instructed them to cover the remaining chiefdoms.

He asked the government, development partners, and the private sector to support the program or with start-up kits and any form of support for the good of his subjects.

At the same event, the First deputy Prime Minister and Minister of East African Community Affairs, Rebecca Alitwala Kadaga, OBB’s Katukiro Owek. Dr. Joseph Muvawala, 1st Deputy Katukiro Owek Mohammed Lubega, second Deputy Katukiro of Busoga Owek.Osman Ahmed Noor among other leaders were recognized for the distinguished and outstanding services they have done towards the development of Busoga and Uganda at large. 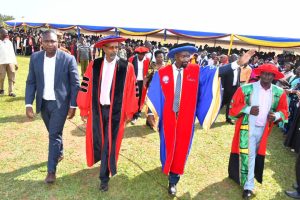 Kyabazinga handed over plaques to them as an appreciation. The one for Dr. Muvawala was received by Prof. Dr. Muhamadi Lubega, the First deputy Katukiro of Busoga.

The Monarch also recognized various media houses that operate in Busoga for the services they provide to the skilling program and for informing his subjects programs of OBB.

He urged the youth who graduated to train other youth from their respective areas, in skills they have learnt at Gabula Royal Foundation so that they may create jobs and improve their incomes.

The First Deputy Prime Minister Rebecca Kadaga appreciated Mr Sula Kamira Kyepa and Isaac Imaka, the CEO of Gabula Royal Foundation, for the efforts they have exhibited in skilling youth in Busoga.

She said that on the government’s part, they will lobby for power connections to villages where it is not available, and connect water and tarmac roads where necessary.

The third deputy Prime Minister, Rukia Isanga Nakadama, urged graduates to implement skills they have learnt through starting up businesses and employing others.
Gabula Royal Foundation’s CEO, Isaac Imaka said the graduates will help in fighting poverty in Busoga by creating jobs and employing other youth.

Imaka said this was the second graduation organized by the Foundation, the first one was in Bugiri for about 4,000 youth in 2021. 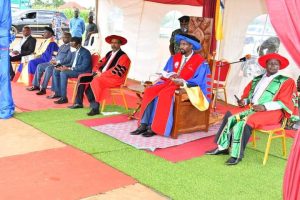 Present at the ceremony were; Royal Chiefs from various Chiefdoms of Busoga led by Issabalangira Prince Samuel Zirabamuzale Menhya of Bugweri, The Kyabazinga Affairs minister and other OBB Ministers, Members of Parliament, The DIT Director, Assistant Commissioner for youth Mr. Mondo Kyateka of Ministry of Gender, Mayuge current and former LCV Chairman RDC Richard Gulume and parents of graduates, among others.