Bobi Wine was Peacefully Escorted to His Home, Police Clarifies

Bobi Wine was Peacefully Escorted to His Home, Police Clarifies

Bobi Wine was escorted by Police from Entebbe airport. (Photo by Simone Schlindwein)

Contrary to earlier reports that the legislator for Kyadondo East, Robert Kyagulanyi Bobi Wine was arrested, Police has come out to clarify that this is incorrect.

Instead, Police say it escorted Bobi Wine from Entebbe airport where he landed upon arrival from U.S, and that he was led to his home in Magele, Gayaza.

Bobi Wine’s brother known as Dax Vibez who was accompanying the MP on their flight had said in a video recording that Bobi Wine had been arrested.

In a statement issued Thursday afternoon, the Police spokesman, SSP Emilian Kayima thanked Kyagulanyi for being cooperative with the authorities.

He said the MP “was peacefully escorted by Police to his residence in Magele, Wakiso district”.

“We wish to thank him for cooperating with Police at Entebbe International Airport that provided him with transport, escort and a lead car to his home,” Kayima said.

He urged for calm among Ugandans and for Bobi Wine to comply with the law as well as the conditions set for his bail weeks ago.

Kayima has also refuted earlier reports that a group of journalists had been arrested as they covered the happenings in Entebbe ahead of Bobi Wine’s arrival, and their equipment confiscate.

“This is not absolutely true,” he said in his statement, adding that “all [journalists] are free going about their lawful business normally”. 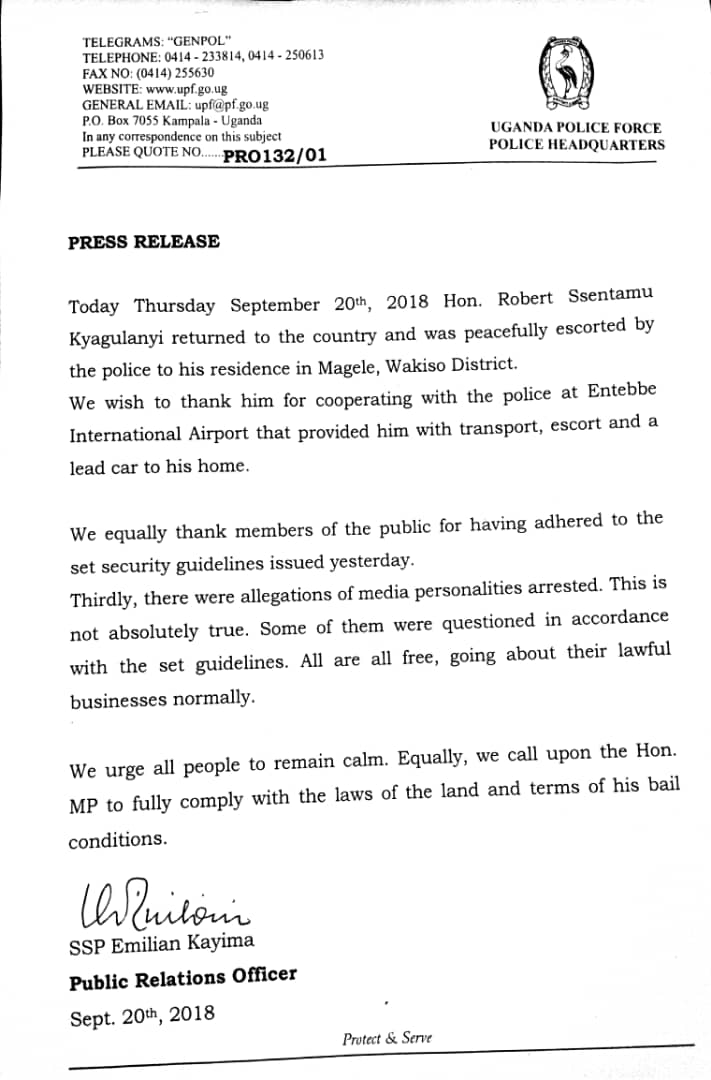