VP Jessica Alupo and Gen Katumba Wamala at the event

Government  of Uganda will work with stakeholders like the Engineers Registration Board to review the Engineers Registration Act-1969 and other related  bills and policies  such as the National Construction Industry Policy.
The Vice President was speaking at the World Engineering day, a day observed to commemorate the work done by engineers   and to encourage them for improvement and innovation.
The day,  marked under the theme “Build Back Wiser – Engineering the future”  was graced by several Engineers from Uganda and beyond, including a number of women Engineers whose attendance coincided with celebration of the Women’s month.
The theme draws on previous experiences to make a better future  for the Ugandan Population.
Alupo praised the contribution and role played by Engineers in Uganda towards the development and transformation of our country.
“It has always been the role of Engineers, Technologists, technicians, artisans and craftsmen to plan,design,develop, operate and maintain the physical infrastructure, the technology and the systems that are required for our country to achieve the aspirations of Vision 2040, I salute you thus, for your contribution towards the country’s  transformation  of physical  infrastructure, technology and systems”, the VP remarked, as Engineers gathered to mark the World  Engineering Day on Friday.
The Vice President  noted that  out of their profession and contribution, Uganda had increased paved roads to over 5000kms, had increased electricity generation capacity from 600MW to 1800MW as well as an increase in several other areas.
“All these achievements would not have been possible without the depth of the Engineering professionals.
Alupo, however, decried the challenges faced, like low registration rates of Engineering professionals and unprofessional practices, but promised that the policy framework would be improved, especially, repealing of outdated laws.
“We must enact new legislation where laws may be lacking,” Alupo said.
The Vice President also recommended the work and contribution of the UPDF Engineering  Brigade which she said,  had come as a result of the firm stand by the President  also Commander-in-Chief to professionalise the army.
“It is good to see the Engineering brigade here today, mixing,chatting and working with other Engineering professionals outside the barracks. I urge you to keep working symbiotically with the rest of the engineers to drive the country forward”, the VP counseled.
Speaking at the same event, the chairman of the Engineers Registration Board- Eng. Dr. Isaac Mutenyo decried the existing gap on training and skilling, and recommended for a  mandatory structured training program. 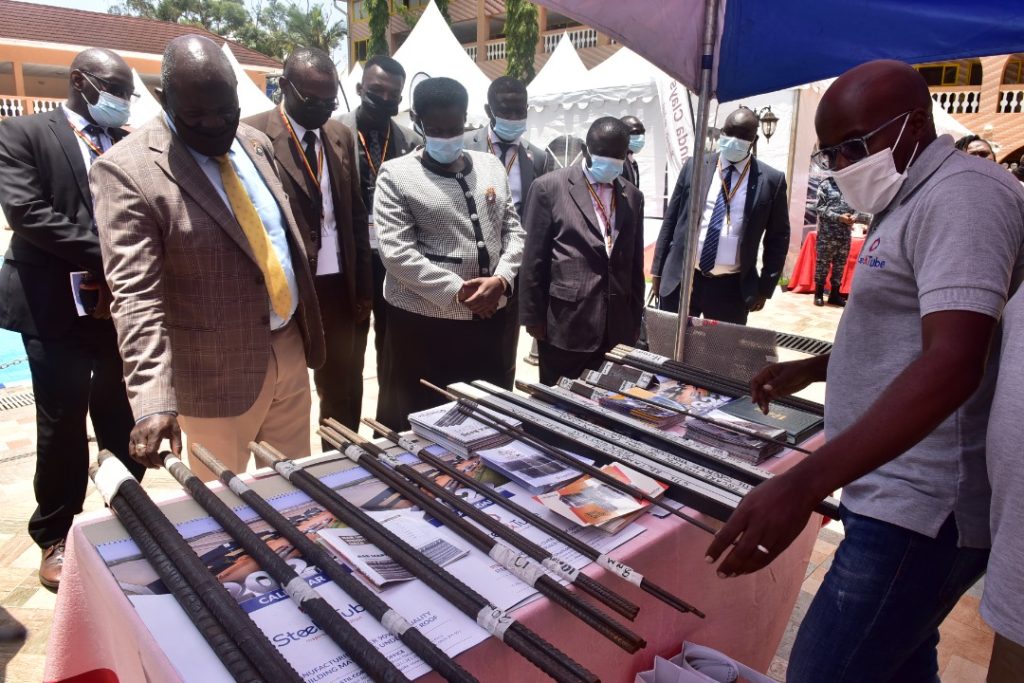 He further added that  the Board had created a SACCO that seeks to creating a strong financial base for access  to affordable capital, for Engineers.
Eng.Samson Bagonza, from Ministry of Works presented the Key note address  themed” leveraging Engineering as a Catalyst to National Development” in which he said, Engineering and National Development go hand in hand with engineering being the enabler of National Development.
“There cannot be meaningful economic growth in a country without the impact of engineering. Engineering has a direct relationship with development and National development is measured largely by the quality of engineering activities and level of infrastructure development.”
He recommended that the Engineering index should be adopted by the Planning Body as a key Development indicator in Uganda.
Present at the function was the Minister of Works and Transport, Gen Katumba Wamala who presented an award on behalf of the Engineers Registration Board to the Vice President.
Post Views: 130
Tags: Gen Katumba WamalaSoftPowerSoftPower NewsUganda Engineers ActVP Alupo
Leave Comment