This fight will act as a catalyst for Ssebute to challenge for the major honour boxing in Africa which is the Africa Boxing Union Title.

In the same way, Musa Ntege will be defending his belt against Imani Daudi Kawaya in the cruise weight 86 kg 10 rounds category.

Officially sanctioning the fight, Lt. Col Dr. Kato, advised Sgt Ssebute, “If you want to remove the dilemma between the referees, make sure you get the lead points to clear the way and if you cannot get the 10 points to win the match you must look for a knockout and to fight till the end.” 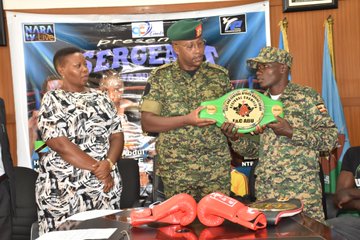 He further assured him of all the necessary support from the UPDF Leadership to ensure that the fight is a success and called upon all the current sponsors and willing sponsors to come onboard and support the fight.

The 31-year-old Sgt Ssebute said he is eagerly waiting for the East and Central African title fight as well as the World completion fight; he thanked the UPDF Leadership and the Uganda Professional Boxing Commission for their endless support.