Just days after Rwandan President, Paul Kagame said that his country will raise the cost of those who plan to destabilise Rwanda, identity cards of military officers of the Rwanda Defence Forces (RDF) were Saturday found in ADF camps, a militia group, fighting to undermine the Ugandan government.

The rebel group which is recognised as an Islamist terrorist organisation around the world has massacred hundreds of people in both Western Uganda and Eastern DR Congo as well as destroying a lot of property since launching its operations in the 1990s.

The Uganda People’s Defence Forces (UPDF), Congolese armed forces (FARDC), and the United Nations Organization Stabilization Mission in the Democratic Republic of the Congo (MONUSCO) have since been conducting offensive operations against the rebel group.

However, recently, an impeccable source told SoftPower News that a number of top military officers of the Congolese army operating in the area were replaced by new commanders from Kinshasa, on claims that the old commanders engaged in wrongdoing particularly collaborating with ADF Rebels and agents of Rwanda on illegal business dealings in Timber and Minerals. 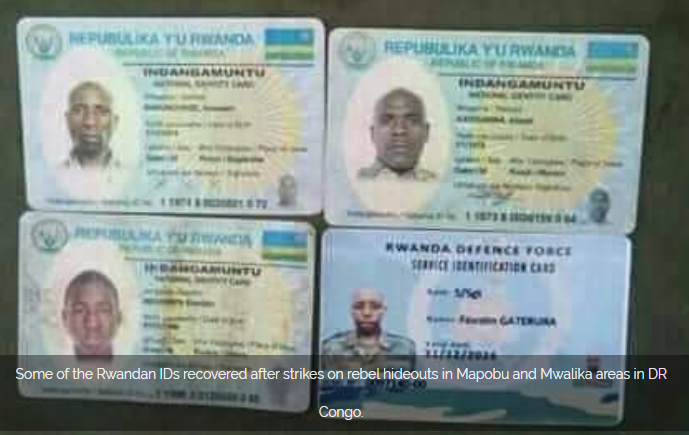 Now, on Saturday, the new Congolese commanders conducted multiple operations in the rebel hideouts at Mapobu and Mwalika areas both located in the North Kivu Province.

According to a source within FARDC on the frontline in Kivu, the killed duo was in possession of loaded rifles.

“In this particular operation, two groups are said to have engaged the rebels. The North axis under Brig. Chiko faced off with ADF rebels at Mapobu killing one rebel commander,” the source said.

He was found with a Sub Machine Gun (SMG), killed because of attempts to resist,” added the source.

The source added that the other FARDC group in the Southern axis commanded by Brig Andrea in the areas of Mwalika saw another ADF rebel commander eliminated among others.

Another Axis named Mayangose under Col. Dunia used air support (Migs) and bombed suspected rebel hideouts. Ground forces were also employed to close in and check the results of the airstrike, the source explained.

He revealed that a number of military wear and identity cards belonging to Rwanda Defence Forces (RDF) were found in the area during this operation by the new Congolese commanders.

The development comes amid reports that Rwanda has allegedly been backing and continues to provide support to the ADF rebels to destabilise Uganda. In fact, it is reported that it is a deliberate and well-orchestrated move by Kigali to destabilise other countries and instead, rush to accuse the countries of plans to destabilize as a cover-up of its own operations.

Mid this year, several Rwandan forces reportedly perished in ADF occupied areas close to Beni in DR Congo. Several of the casualties were said to be high ranking military officers. They were shelled by rebel groups known as the Gumino Rebels and P5 inside DR Congo. Some were airlifted back to Rwanda.

According to the DR Congo locals, Rwanda’s military was also spotted in Congo’s Virunga Park in North Kivu while others were seen crossing to South Kivu, near the border with Burundi. DR Congo locals said then that Rwanda’s military moved into DR Congo through Njerima – Kanyanje hills towards Karisimbi forest. It was anticipated that the move was to render not only financial support to the rebels against Uganda but also a human resource.

All this transpired at a time when reports were ripe that Rwanda planned to compromise Uganda’s national security during and in the lead up to the 2021 elections by having ADF mercenaries carry out atrocities inside Uganda.

While delivering a speech at a ceremony that saw the swearing-in of newly appointed cabinet ministers and senior military officers at the parliament in Kigali, Rwanda last week, President Kagame warned that people who are trying to destabilize Rwanda, including those backed by foreign forces, will bear a heavy cost for their actions.

He said: “I want to warn some people among us who hide behind different things. They hide behind politics, democracy, freedom that we actually want. We are going to raise the cost on the part of anybody who wants to destabilize our security, the cost is going to be very high. The people behind this nonsense and even backed and praised by people from outside, and become excited, are going to face it rough.”

Although he did not specifically name Uganda in that particular address, the President and his lieutenants in the foreign affairs ministry have severally taken to social media to accuse Uganda of supporting the country’s dissidents.

Sources privy to the developments in the Kigali administration intimate that several RDF high ranking officers have since been running from Rwanda to seek asylum in several African countries as well as the rest of the World. Some of these are said to have denied involvement in missions to destabilize other countries.

But, many of them have been followed in their host countries reportedly by Rwandan Security agents to either forcefully return them home or kill them. Lt General Kayumba Nyamwasa has survived three assassination attempts in South Africa where he sought asylum and blames all attempts on the Rwandan government.

A number of Rwandan agents linked to kidnappings of Rwandan refugees in Uganda have been arrested and deported to Rwanda. The Ugandan government in September deported 32 Rwandan nationals considered to have been engaged in espionage and entered the country illegally to undermine Uganda’s national security.

Several others, including Rene Rutagungira, an agent of the Rwandan Directorate of Military Intelligence (DMI), are currently facing the General Court Martial in Uganda for kidnapping Rwandan refugees in Uganda and illegally repatriating them to Rwanda.

In March this year, court in Kampala released on bail a Rwandan national, Moses Ishimwe Rutare.

It is reported that the accused was arrested by security operatives in December 2018 on allegations of lingering near a Chieftaincy of Military Intelligence (CMI) installation.

A number of Ugandan security officials including former police spokesperson, AIGP Andrew Felix Kaweesi and Maj Kiggundu were gunned down in Kampala. At the time, the sacked police leadership which was closely linked to Rwanda blamed the murders on ADF, a terrorist group that was many years ago defeated by the Uganda People’s Defence Forces (UPDF). The rebel group withdrew to DR Congo. Are some of the ADF agents often blamed for some of the murders that rocked Kampala in 2018, mercenaries of a neighbouring country?

In spite of several media allegations made by both Rwanda’s President Kagame and his foreign affairs officials against Uganda, President Museveni has maintained he will not discuss Rwanda’s issue in the media. He says diplomatic mechanisms will suffice.

However, in a March 10 correspondence by President Museveni to President Kagame, he said; “What is wrong is for Rwanda agents to try to operate behind the government of Uganda.”