The meeting took place on September, 1 2022, in Kigali Rwanda.

The Diplomatic and Political consultations between the Ministers of Foreign Affairs is a continuation of the commitment of the Heads of State to further deepen and strengthen the cordial bilateral relations between the two sisterly countries.

Both Ministers acknowledged the ongoing progress made so far to normalize bilateral relations.

They reiterated their commitment to focus efforts on the mutual regional security and development issues that impact on the socio-economic welfare of the peoples of the two countries.

Additionally, the Ministers recognized H.E Kagame’s visit to Uganda and the subsequent visit to Rwanda by President Museveni during CH6GM 2022 as a strong signal toward renewed bilateral relations.

They agreed to review and revive bilateral cooperation in the different areas of interest by convening the next Joint Permanent commission between Rwanda and Uganda.

They further agreed that the next Joint Permanent Commission will be hosted by the Republic of Rwanda by March 2023 and will focus on critical consideration of the outcomes of the last Joint permanent commission. 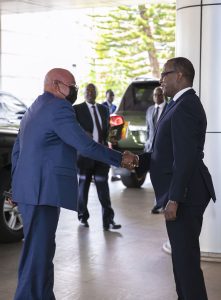