PM, Dr Ruhakana Rugunda administering the Rotavirus vaccine to one of the children during the launch. Next to him is Health Minister, Dr Ruth Aceng (R).

Government has launched a new Rotavirus vaccine to protect under five-year-old children from diarrhea.

The vaccine which will be available for free in health facilities throughout the country, is the 11th vaccine to be added into the national schedule of the expanded programme on immunization in Uganda.

It was launched by the Prime Minister, Dr Ruhakana Rugunda on Tuesday at an event held in Buikwe district.

Rotavirus vaccine is safe and can be administered simultaneously with other routine infant vaccines. It is given orally and requires two doses at 6 and 10 weeks of age, with an interval of at least 4 weeks between doses.

Rotavirus infection is the leading cause of diarrhea in children under five and it is highly contagious. It poses an exception to typical diarrheal disease management rules.

While improved access to clean water and better sanitation and hygiene practices are vital to preventing most diarrheal diseases, they have done little to disrupt rotavirus infection. The virus may cause severe, dehydrating diarrhea in young children and, in untreated cases, lead to death.

Globally, according to the World Health Organization, an estimated 450,000 children under five years of age die each year from vaccine preventable rotavirus infections. Diarrhea is among the top ten causes of morbidity in Uganda, with rotavirus being responsible for about 40% of all diarrheal cases.

Speaking at the launch of the vaccine in Buikwe, Prime Minister, Dr Rugunda said that preventive healthcare is the best, effective and cheapest means of delivering health services to our people.

“It is pleasing to note that the spread of the Rota virus is highly preventable since the ways in which it is spread are known and can be avoided through maintaining good hygiene and proper sanitation,” Rugunda said. He was representing President Yoweri Museveni at the launch. 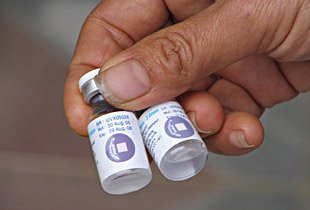 “The Rota virus diarrhea immunization is just an additional way to ensure that our children are free from infection. It is, therefore, a welcome vaccine to our health system,” he added.

An unhealthy labour force cannot support effective national production, said the Prime Minister, adding that government will continue with programmes aimed at improving the health of our people.

The Minister appealed to Ugandans to take their children at 6 weeks and 10 weeks of age for rotavirus immunization to the nearest health facility.

“An estimated 10,637 children under five years of age die in Uganda each year due to rotavirus diarrhea,” Aceng said.

She emphasized the Uganda Government’s commitment to fight against vaccine preventable diseases and accelerate reduction in child morbidity and mortality.

The introduction of the rotavirus vaccine into the routine immunization schedule has been financed by Gavi, the Vaccine Alliance, with technical support from WHO and UNICEF.

“This vaccine will help save the lives of thousands of children in Uganda by combating severe diarrhea,” said Gavi Deputy CEO Anuradha Gupta.

“The introduction of rotavirus vaccine marks a key milestone in the country’s commitment to improve the health of all children and I would like to commend the Government for its efforts to provide a bright future for Uganda’s next generation.”

“WHO emphasizes the use of Rotavirus vaccines to be part of a comprehensive strategy to control diarrhea diseases with the scaling up of both prevention and treatment packages,” said WHO Representative Dr. Yonas Tegegn Woldermariam.

The UNICEF Representative in Uganda, Dr. Doreen Mulenga called upon parents, guardians and caregivers to ensure that all infants are immunized against rotavirus. She added that vaccination is one of the best ways to protect children from serious childhood diseases.