South Sudan President, Salva Kiir, over the weekend received H.E Felix Antoine Tshisekedi, the President of the Democratic Republic of Congo (DRC), in the capital Juba.

The two leaders held a meeting on a wide range of bilateral and multilateral issues concerning the Republic of South Sudan and DRC.

In their discussions, President Salva Kiir congratulated President Tshisekedi and the Congolese people for their country’s recent admission to the East African Community (EAC).

The President stated that DR Congo’s joining of the East African Community provides an avenue for enhancing mutual cooperation in areas of trade, agriculture, infrastructure development and movement of people across the borders of the two countries.

Since trade and movement of people cannot take place in an environment of rampant insecurity, the two leaders briefly touched on the issue of security and agreed that they both need to work jointly to restore stability along the border areas.

In the international arena, both leaders discussed their collective concerns pertaining to the expected rise in the prices of essential commodities due to the ongoing war in Ukraine.

President Kiir and President Tshisekedi agreed on the need for a unified African position on the current conflict in Ukraine, which calls for a negotiated settlement to the conflict.

On his part, President Felix Tshisekedi invited South Sudan to join the rest of the East African countries in the fight against the negative forces that are obstructing strengthened cooperation, peace and security within the region. 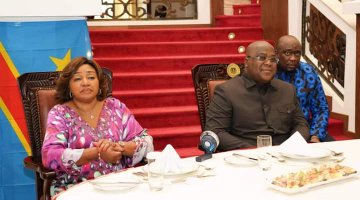 President Tshisekedi said they discussed approaches to strengthen the security between South Sudan and DR Congo, especially at the borders, and they agreed to put peace and security in the two countries as a top priority in order to bring development to the two nations.

President Felix Tshisekedi added that they also talked about the construction of a road connecting South Sudan and the Democratic Republic of Congo in order to enhance food security in the two countries for the welfare of the people of the two nations. 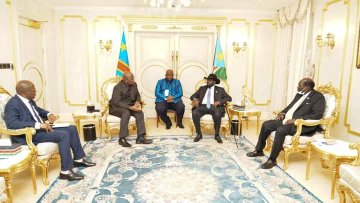