DODOMA: H.E. Samia Suluhu Hassan, the President of the United Republic of Tanzania, met Ambassador. Richard Kabonero, Uganda’s High Commissioner on March, 29 2022 at the State House Chamwino, Dodoma, to bid him farewell following the completion of his tour of duty.

During the meeting, President Samia congratulated Amb. Kabonero for successfully completing his tour of duty and commended him for his great contribution in further strengthening the bilateral cooperation between the United Republic of Tanzania and Uganda especially by facilitating State visits at the highest level between the two countries.

She lauded his efforts in ensuring that Uganda hosted the 4th Session of Joint Permanent Commission (JPC ) between Uganda and Tanzanian upon which our bilateral relations are anchored, as well as fast tracking the implementation of the EACOP Project which culminated into the signing of the Final Investment Decisions (FID) on 1st February 2022, among other numerous achievements.

The President urged Amb. Kabonero to continue encouraging Ugandan investors to invest in Tanzania to promote socio-economic transformation and development for both countries.

The President wished him continued success in his next assignment and hoped that he would be “Tanzanian’s Ambassador in Uganda” as well.

She informed the High Commissioner that he would always be welcome to Tanzania.

In his remarks, Amb. Kabonero thanked . President Samia, for according him time out of her busy schedule to bid her farewell.

He congratulated Her Excellency on her first Anniversary as President of the United Republic of Tanzania and thanked her for choosing Uganda as her first destination as President.

He further expressed his utmost gratitude to the President for the support extended to him by her office and the Ministry of Foreign Affairs and East African Cooperation under the leadership of Hon. Amb. Liberata Mulamula during his tour of duty which eased his work in the United Republic of Tanzania, and he looked forward to further engagements with Tanzania even when back at Headquarters.

The High Commissioner reiterated President Yoweri K. Museveni’s invitation to President Samia Suluhu Hassan for a State Visit to Uganda in May 2022. 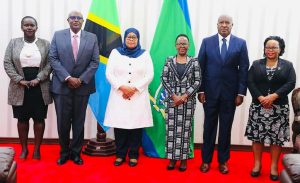