Some of the Students of Swangz Creative Academy

The students that have graduated were the selected few from the many that applied during the school’s first June intake and the semester.

All the graduates at the graduation ceremony held on 29th of July have been extensively trained with hands/practical skills and lessons from top production professionals.

They have been issued Certificates, having fulfilled all the requirements of the course to which they enrolled in June 2022.

The certificates are certified by the Director of Industrial Training under the Ministry of Education. 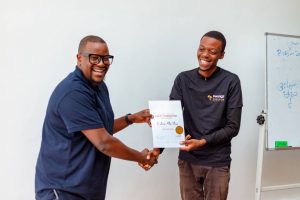 The academy model is 80% practical and gave these students an opportunity to work on top real market assignments.

We saw them work on the recently concluded MTN Momo Waaka campaign, Guinness Bright house event at Motiv and the Live broadcast students were part of the recently held Azawi concert.

During the course of five weeks, the graduates learned an array of skills including music production, video editing among others.

They also got a mentorship session from the legendary Benon Mugumbya and Swangz Avenue CEO Julius Kyazze.

The ceremony took place at the Swangz Avenue Creative academy premises located at the Square in Industrial area.

They have attended all class sessions held during the nearly five-week long Fellowship.

The Swangz Creative Academy seeks to skill students who are passionate about developing a career within the creative arts industry.

All courses employ an 80% hands-on teaching technique with the rest being theoretical assessments with a Q&A format.

The next intake will be on 22nd of August this year and registration is already in progress via their website academy.swangzavenue.com