The President of the Federal Republic of Somalia, H.E. Hassan Sheikh Mohamud, has today arrived in Uganda for a three-day state visit at the invitation of his counterpart, H.E. Gen Yoweri Kaguta Museveni.

The President and his delegation were received at Entebbe International Airport by Hon. Gen. Hajji Abubaker Jeje Odongo, the Minister of foreign Affairs, the Ugandan Ambassador to Somalia, H.E. Prof. Turyamuhika Sam and the Deputy Ambassador of Uganda to Somalia, Maj Gen Nathan Mugisha.

The Somali President was accorded a guard of honour by the Uganda People’s Defence Forces (UPDF) and entertained by the crane dancers. 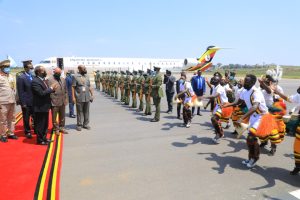 President Mohamud is the newly elected President of Somalia since May 2022 and the founder and current chairman of the Union for Peace and Development Party.

Previously he served as Somalia’s eighth President from 2012 to 2017.

He will later be joined by President Yoweri Museveni to address the Somalia-Uganda Investment and Business Summit at Speke Resort Munyonyo. 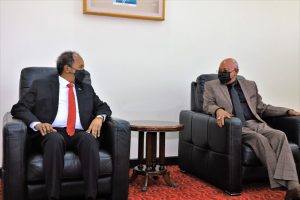 An existing Framework Agreement signed between Uganda and Somalia in 2016 highlights areas of cooperation between different sectors and Ministries, Departments and Agencies (MDAs) of the two countries ranging from Political Consultations (Foreign Affairs), Defence and Security, Police, Air Transport, Trade and Investment, Health, Agriculture and Animal Husbandry, Refugees, Financial Services, Tourism and Culture, and many others.