King Salman declared a public holiday in Saudi Arabia on Wednesday to mark the national team’s stunning 2-1 upset over Lionel Messi’s Argentina at the 2022 World Cup.

The news is a feather in the cap of Crown Prince Mohammed bin Salman, who recommended the royal order, state media said. Prince Mohammed was not seen at the match but had been front and centre at the tournament opening Sunday.

One of Prince Mohammed’s brothers, Prince Saud, posted pictures on Instagram showing the crown prince prostrating in thanks to God in a room where his other brother, Energy Minister Prince Abdulaziz, was also present, shown holding a Saudi flag and standing next to a smiling crown prince.

It was also a sweet moment for host Qatar, facing intense criticism over human rights in the conservative Muslim country. Qatar’s emir draped the Saudi flag over his shoulders at the match. A Doha skyscraper flashed “Congratulations Greens.”

“Wow! I have all the feelings right now. We beat Argentina, one of the great teams!” said Saad from Riyadh, who is in Qatar for two weeks and was wearing a green Saudi Falcons scarf.

“Our guys played so well — everything went right inside the stadium today. It was amazing.”

On his fifth and final quest for the only major trophy to elude him, Messi, 35, scored a 10th-minute penalty in a dominant first-half display by Argentina on Tuesday during which he and Lautaro Martinez also had three goals disallowed for offside.

But Saudi Arabia, the second-lowest-ranked team in the tournament, after Ghana, threw caution to the wind at the start of the second half, charging at Argentina’s defence in front of a frenzied 88,012 crowd. 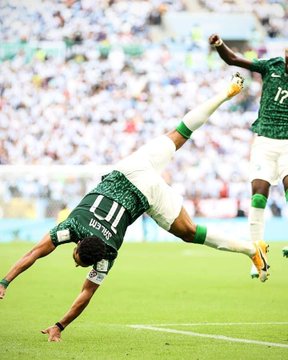 The gravity of the victory will eventually sink in. Saudi Arabia is a team that had won only three World Cup matches in its history prior to the Tuesday game. 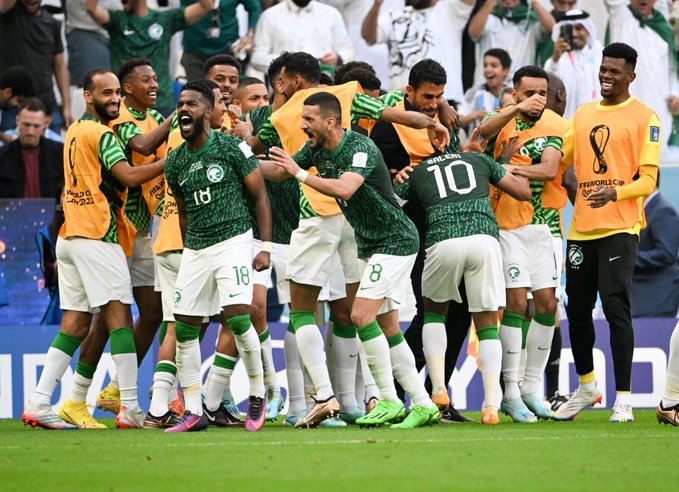 Goalkeeper Mohammed Alowais, who made two key saves late in the game to preserve the win at Lusail Stadium north of Doha, was almost subdued at the end, perhaps not grasping the magnitude of the upset.

“I am very happy about this result that we have been able to obtain against this very storied team,” Alowais said solemnly. “We have prepared ourselves. We were 100% ready and hopefully, we will have better results in the future. I felt we were especially good in the last minutes because we secured our three points.”

Not in just the last minutes. Despite trailing 1-0 at half-time, Saleh Alshehri and Salem Aldawsari managed to score a goal each early in the second half.

Then came more than 50 minutes, including added time at the end of the match at the referee’s discretion, of holding one of the tournament favourites at bay.

“All the stars aligned for us,” said Renard, who won the African Cup of Nations as coach of Zambia in 2012 and then again with Ivory Coast in 2015. 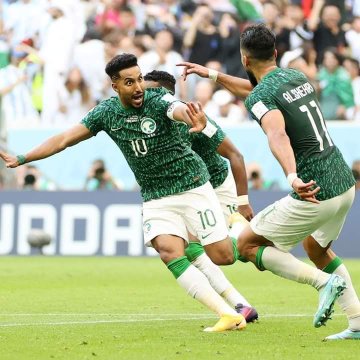 The top two countries qualify for the round of 16

Renard has also coached Angola and Morocco, which he guided to the 2018 World Cup in Russia. He took over Saudi Arabia in 2019.

“We made history for Saudi football,” Renard said. “It will stay forever. This is the most important. But we also need to think about looking forward because we still have two games that are very, very difficult for us.”

Renard said he asked his players to limit the celebration after the game to 20 minutes.

They still must face Poland on Saturday and then take on Mexico next Tuesday in Group C. Both are probably still favourites against Saudi Arabia despite the upset.

He also suggested another possible truth: Messi and Argentina probably underestimated Saudi Arabia, which is only No. 51 in the FIFA ranking. Argentina is No. 3.

“But you know the motivation is not like you are playing Brazil,” he added.