President Museveni (C) receives an award from Makerere Chancellor, Dr Ezra Suruma (L) in recognition for authoring a thesaurus in the Runyakitara language.

President Yoweri Museveni has urged university employees to desist from repeated strikes over issues of remuneration, saying that government is working towards increasing salaries of university staff but through a gradual process.

Museveni was speaking on Tuesday at Makerere university where he presided over the university’s 69th graduation ceremony. The three-day ceremony which began on Tuesday will see over 13,000 students attained Diplomas, Bachelors Degrees, Masters Degree and PhDs.

“The NRM government is committed to ensuring that university staff are remunerated well, and eventually we shall match global standards,” President Yoweri Museveni said.

“This will be done gradually and in tandem with the country’s economic growth,” he added.

“Government University staff, please, repent the sin of little faith. Things will be done. But done, not according to miracles. We are going to achieve targets by struggle,” the President said while addressing the congregation at the Makerere University Freedom Square.

His comments come days after staff in public universities resolved to embark on an industrial action. They demand payment of their salary arrears amounting to Shs 33bn.

So far, Kyambogo University, Busitema and Makerere University Business School are participating in the strike. Makerere staff said they will not report when their semester begins on January 19.

“One problem we face is prioritization. When we say, let’s remunerate academic staff starting with scientist, then they will say ‘We are all equal’. That’s not the way of working,” Museveni said on Tuesday.

“Me I don’t mind if we start with number 1, number 2. Because even number 3 will follow”.

The President stressed the need to fight the war of capacity building in a disciplined way like the NRA did in the liberation war.

Commenting on the same issue, the Minister for Education who is also First Lady, Janet Museveni said that strikes only portray the university staff as selfish individuals who care less about the academic progress of students.

“There is no reason for insisting on industrial action when fully aware that government has been tirelessly working to not only find the resources but also address the issue of structure in public universities,” the Minister said.

On his part, the Vice Chancellor of the university, Prof Barnabas Nawangwe said that the coming semester will open this month as scheduled.

“Let me take this opportunity to inform the parents, students and all stakeholders that Makerere University will open as planned on Saturday January 19, 2019. All students and lecturers are expected to report on duty as per time table,” Prof Nawangwe said.

One of the grievances recently cited by the academic staff at Makerere was the ‘irregular’ dismissal of members of staff by the university Management. They accuse the Vice Chancellor and Management of flouting the rules when they dismissed staffers said to have been indisciplined.

However, President Museveni Lauded Prof Nawangwe and his team for decisively dealing with the problem of indisciplined lecturers. Among those affected by the dismissals was renowned researcher, Dr Stella Nyanzi.

“I want to congratulate Prof Nawangwe and his team for being decisive in terms of disciplining lecturers here and staff. It is very embarrassing to see a so-called lecturer in court for raping a young girl and he’s still teaching. That’s rubbish,” Museveni said.

To the graduands especially those in the Arts, the President said government will offer support through the various youth programmes, using low interest loans and grants to start ventures like maize milling, carpentry, leather tanning among others.

These ventures, he said, will create employment for other youths as well as help reduce Uganda’s import bill.

During the graduation ceremony, President Museveni along with Dr Muranga, Rev Guma Oshabe and Alice Muhoozi were recognized by Makerere for authoring a thesaurus (Katondozi) in the Runyakitara language. 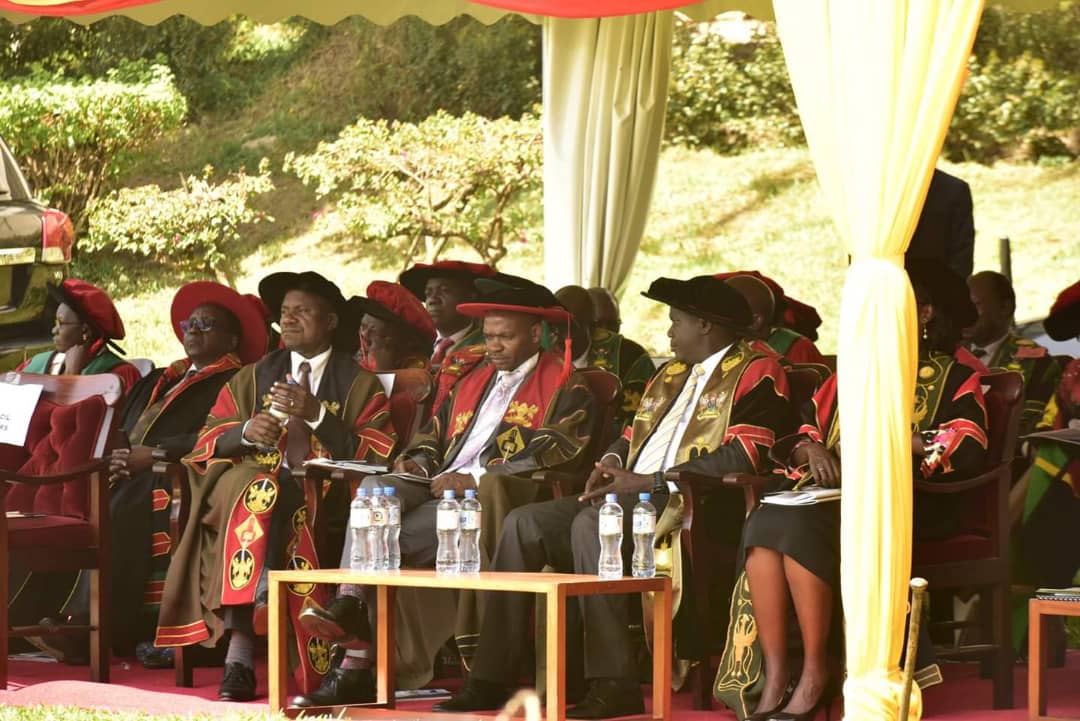 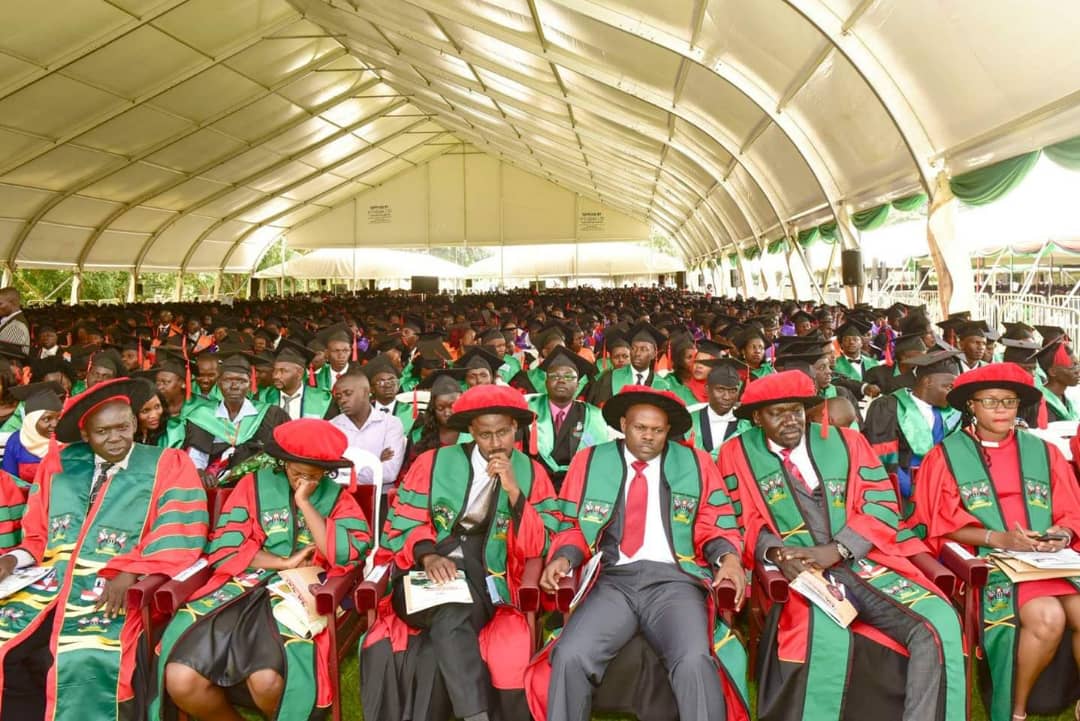 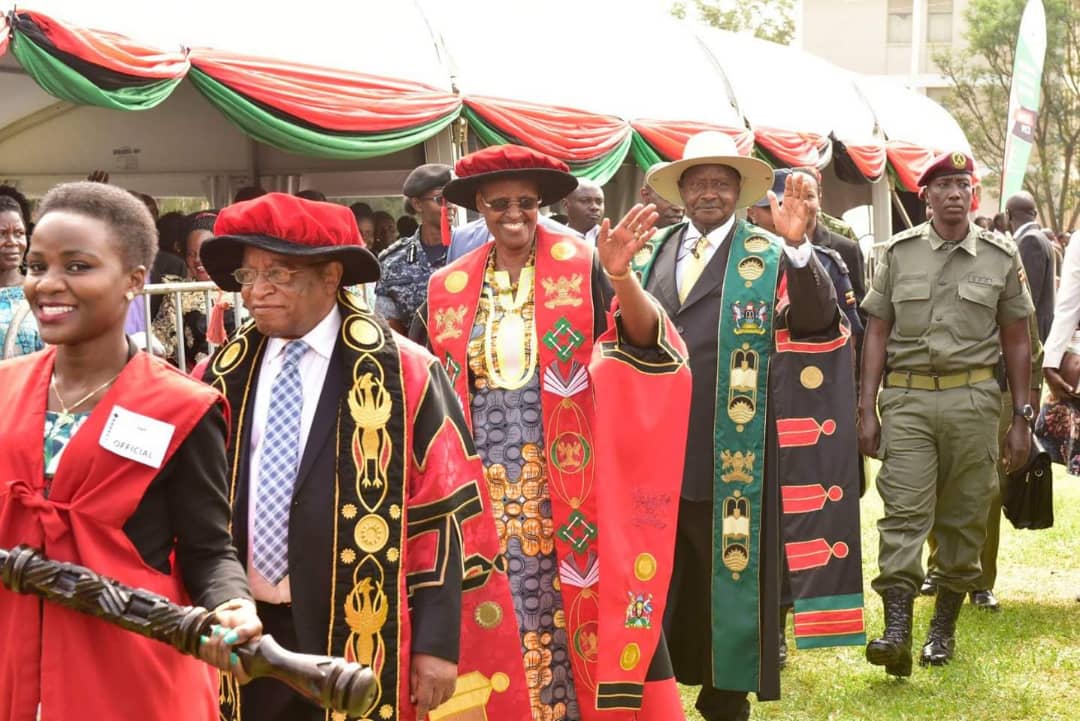 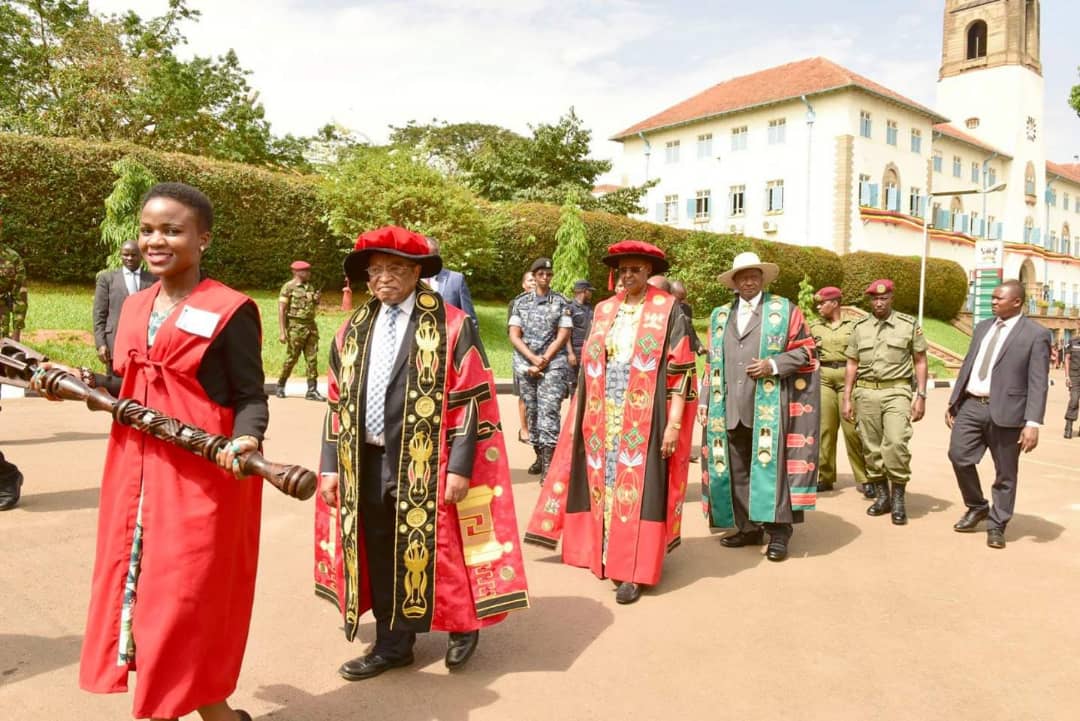 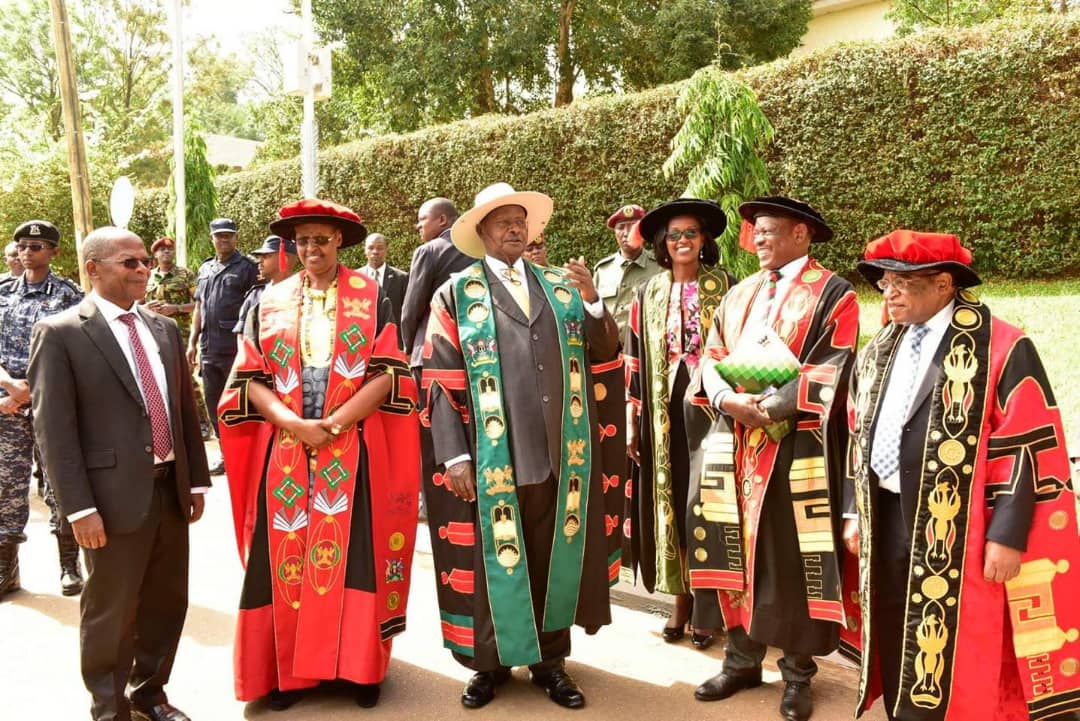 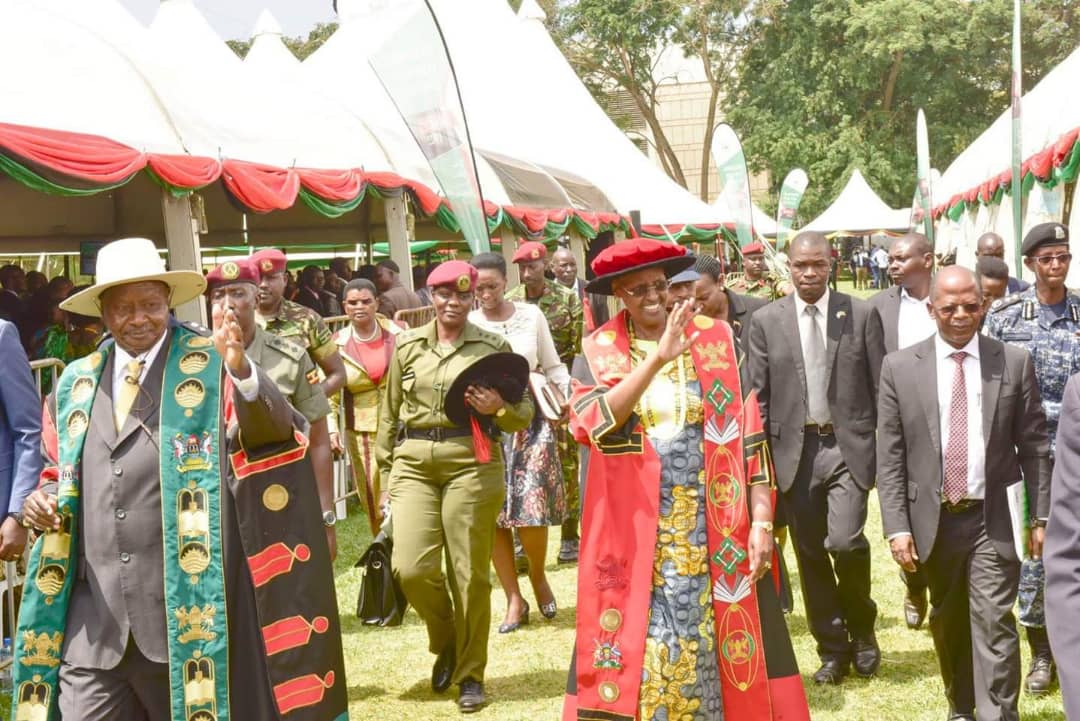 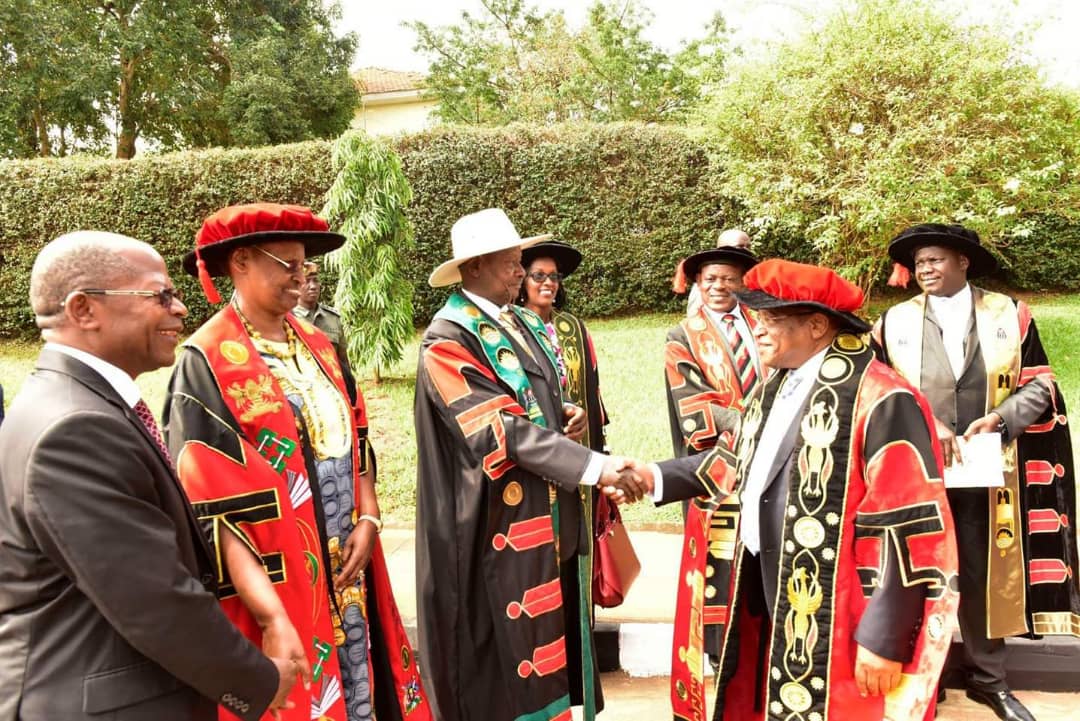 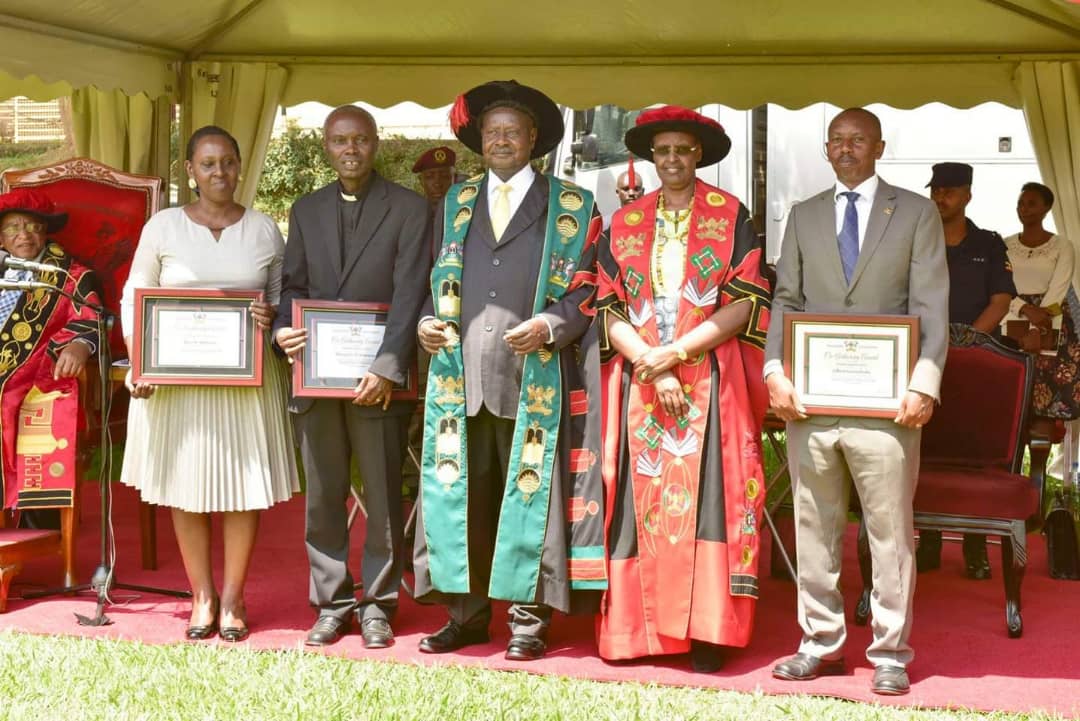