Uganda’s second largest and most popular destination, Queen Elizabeth national park is truly a ‘Medley of Wonders’. The term was coined by the Park’s Conservation Managers and it is befitting!  Set in the low-lying rift valley, it was protected as a wildlife reserve in the early 1920s.  It is crossed by the equator and close to the Rwenzori Mountain ranges.  Queen Elizabeth is by far the most preferred Safari destination in Uganda. 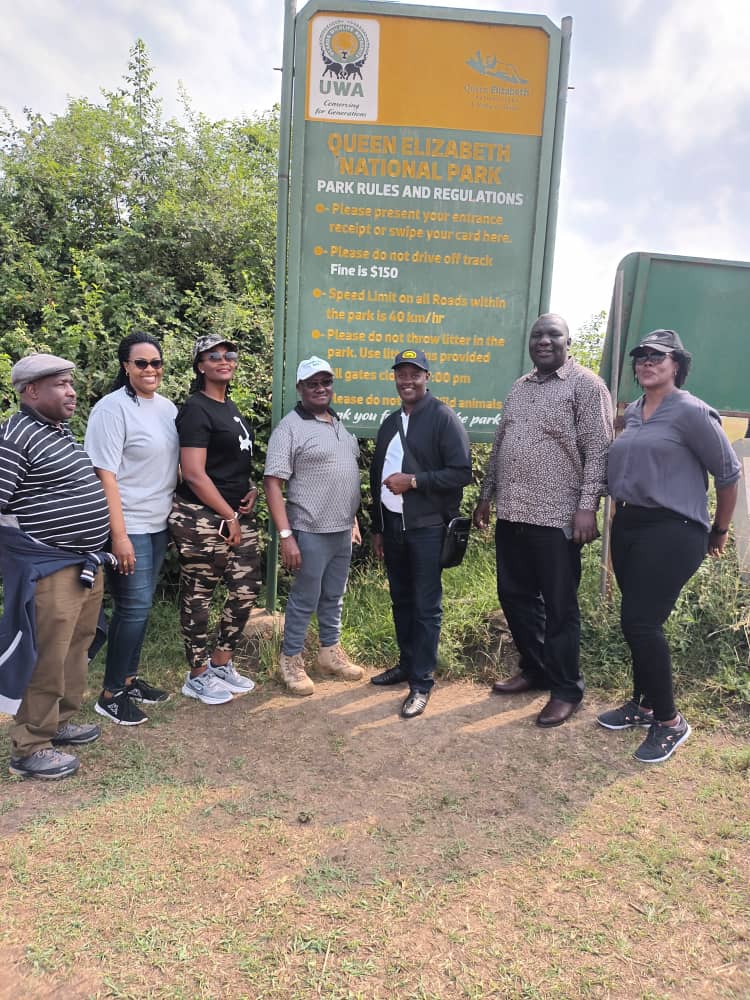 It was felt that this group, who speak on behalf of MDAs, should visit and appreciate some of Uganda’s Tourism assets. It was appropriate that the tour was at Queen Elizabeth national park.  These arranged experiential visits help put Government Communicators in a vantage position to defend and promote the Uganda they know.  It was a fitting gesture by the Wildlife Authority.

Our first stop was at the Katunguru unit of the Park. Here we were welcomed and briefed by the Chief Warden, Mr Ezuma, and his team.  We were alerted to the dos, don’ts and all the safety precautions for a safe Safari in the Park.  Our next stop was at Kyenzaza Community Conservation area to observe the electric fences put up by the wildlife authority to fend off elephants and other animals that used to destroy crops, an act that really peeved the local community.

It was interesting to see how simple the fence looks but the local people who had joined us explained what a world of difference the electric fence had made in their lives.  The live wire fence has latent electric current and can only shock but not harm the animals.  As a result, the animals have stopped crossing over to the crop side of the community area. The representatives who spoke to us attested to this and were eternally grateful to the government.

The landscape of the Park is an amazingly rich biodiversity. It is made up of rolling hills, extensive spans of savanna, the escarpment and breathtaking craters. The location of the Park, below the Rwenzori, gives visitors an opportunity to view the snow at the Equator or the Virunga mountain ranges during clear mornings.  We explored nature at its rawest and the experiential format of Safari that UWA laid on for us was breathtaking. On the morning of 12th January, we started our day with an early morning Park drive thru the savannah plains of Kasenyi on the shores of Lake George; the richest habitat for some of the big five; including the Lions. 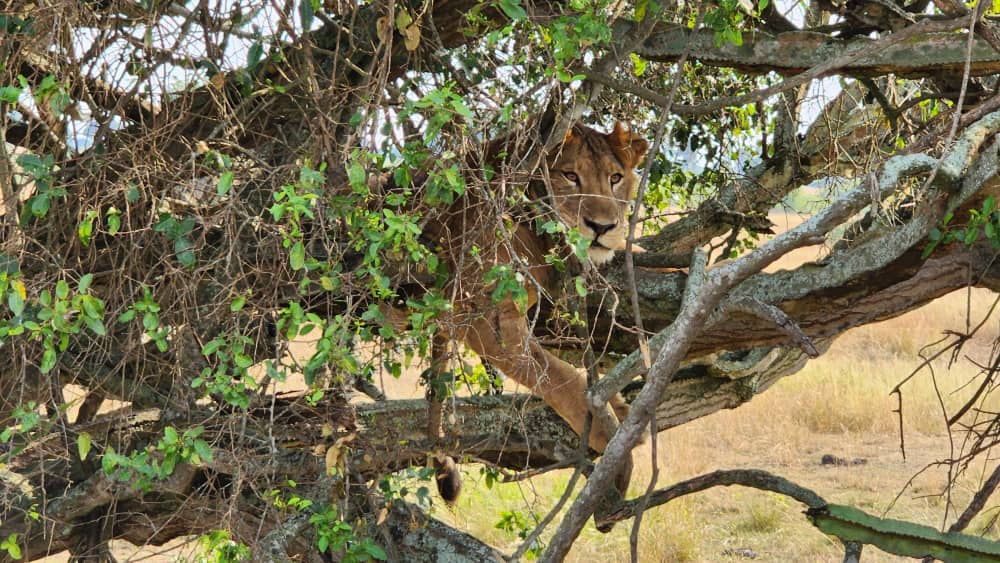 We went through herds of buffaloes, kob and finally located a pride of Lions.  They had killed a buffalo and probably spent the night feasting on it.  In all, I counted 8 lions.  Some were camouflaging in the tall savannah grass, others were perched up in the Cactus Trees. It was an amazing spectacle.  We drove close to them and they just looked at us lazily, sometimes showing discomfit at our gaze.

In the afternoon, we sailed on the Kazinga Channel, the wide water body stretching for 32 km – connecting Lake George and Lake Edward.  We observed a variety of wildlife – spotting Hippos, Elephants, and buffaloes busy grazing or wallowing from the channel.  We also observed a variety of bird species breeding along the cliff or feeding in the swampy areas of the channel.  Afternoons attract a profusion of big game that comes to the Kazinga channel to drink, cool off, shower and eat the fresh grass along the channel. 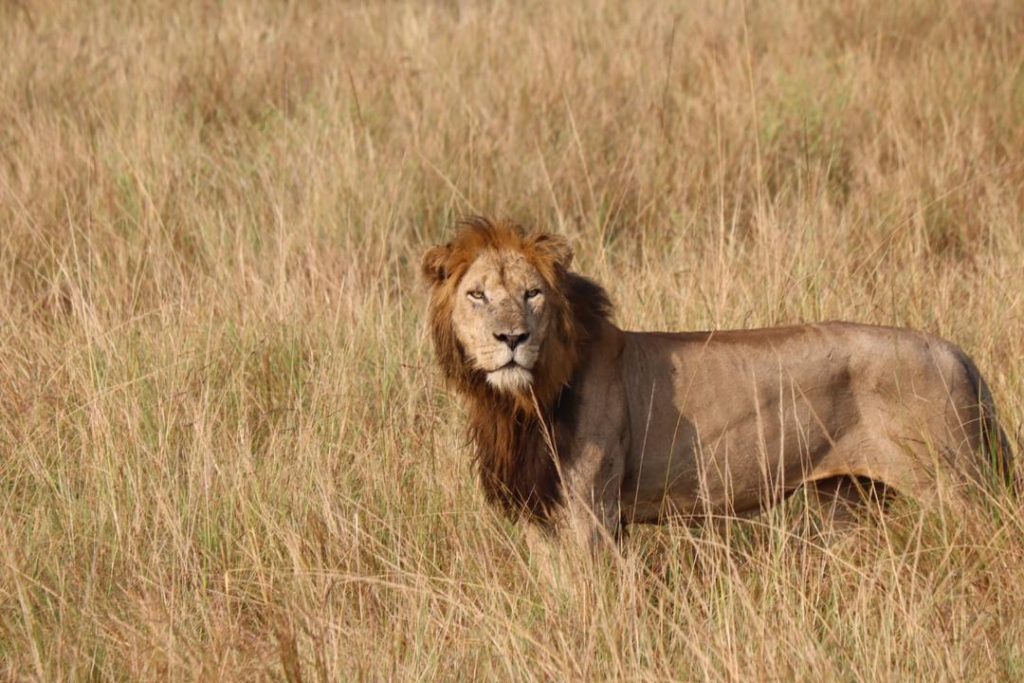 Giant elephants, herds of buffaloes, crocodiles, and antelopes were a site to behold. Predators like lions, leopards and hyenas do appear briefly, mainly for a drink. We did not spot these on the channel.

The last segment of the day was a visit to Katwe salt mining works.  The salt industry of Katwe is over 700 years old and has provided local inhabitants with an appropriate source of income. The first written reports of salt production came from Speke in 1863 and Grant in 1864 who described the production as “perfectly pure in colour and taste”.

The group observed the process of salt collection by evaporation. As one approaches or leaves the salt works, you catch sight of Nyamasagani delta and the Kihabure forest before reaching the pelican point.  It was a beautiful summation of an action-packed day. 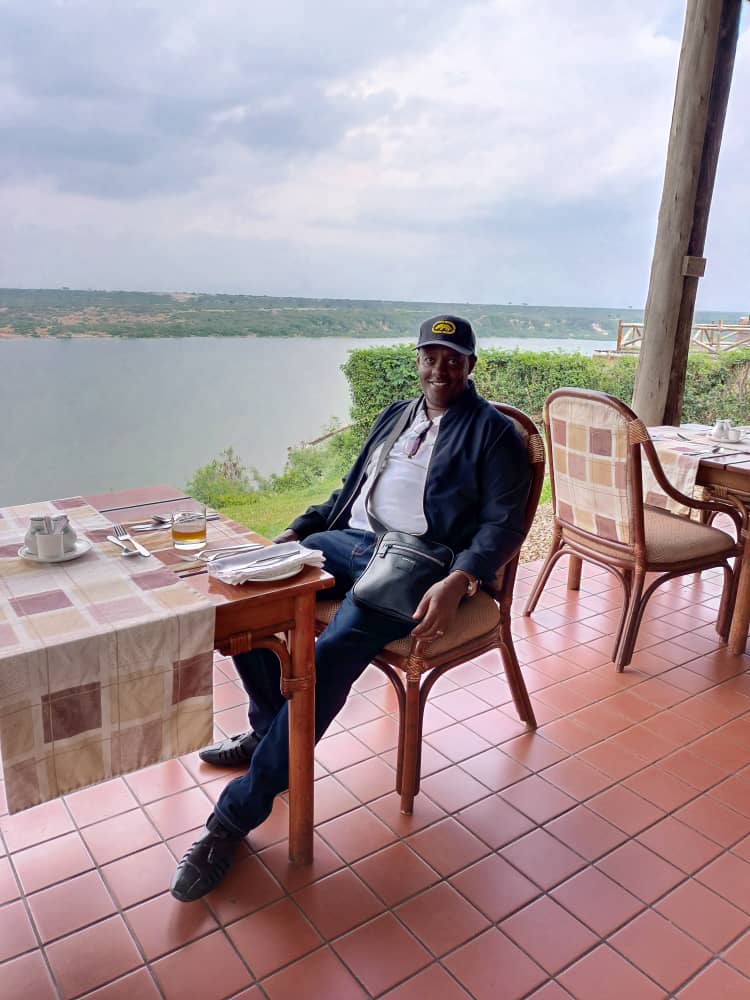 Ken Beaton, the Director and Chief Park Warden at the time of the Park’s inception in 1952 designated Mweya Peninsular as the administrative tourist headquarters. Five-star facilities are also provided here for the discerning visitor. It sits between the Kazinga Channel and Lake Edward. It is an ideal location for relaxation or indeed wildlife-watching by the Hotel. Ensconced on the huge balcony of Mweya, I observed the abundant marine life, watched multiple bird colonies and really got up close and personal with nature in the gorgeous sceneries. Man and nature coexist here peacefully.

On day three, 15th January – which was the concluding day of our excursion, we toured the brand new bio-safety level two Laboratories at Mweya – recently constructed and equipped with the generous support of the Americans. Kilama Kamugisha, the Lab Technician took us through the fully functional Facility which performs various diagnostics for the wildlife and serves all the neighbouring districts as well as the Virunga Transboundary collaboration. It cost USD $6.3 million (23Bn shillings). This enhances animal health through surveillance, detection and control of dangerous pathogens as well as zoonotic animal disease. Queen Elizabeth is home to over 80 animal species and 610 birds, making it one of the richest natural habitats in Africa in terms of biodiversity. 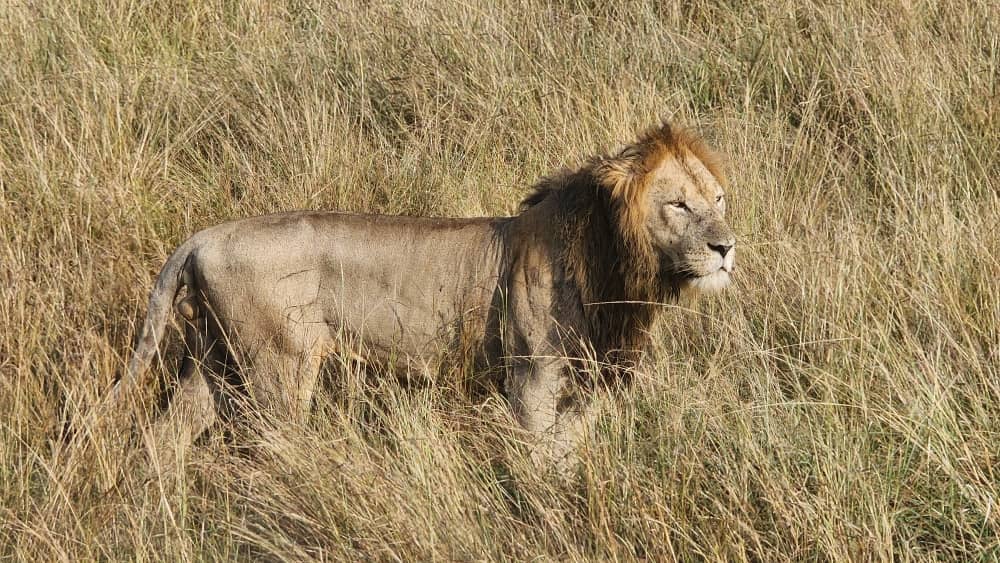 On our way back, we stopped over at Rwimi Prisons Farm in Kabarole district. Commissioner Frank Baine, the Prisons Spokesperson, and a member of GCOF embedded in our team arranged this detour to the Prisons seed Project in Rwimi. The farm trains, rehabilitates and reforms prisoners by imparting crop production and various farming skills to inmates. On release, this enables them to become responsible law-abiding citizens.

At Rwimi, there is massive production of maize. We drove around for several kilometres within the expansive maize fields. Commissioner Baine explained that Rwimi seed project was established after private processors pulled out of the trade.  NAADS and the farmers all over the country were left in limbo – buying low-quality and fake seeds which could not germinate.  The Prisons service launched this Rwimi extensive project on the instructions of the President in order to fill these gaps.  We had lunch at Rwimi courtesy of the OC Station and the Regional Prisons Commander.  It was a pleasant conclusion to a 3-day action-packed adventure. It is important to note that Ugandans are offered discounted rates to visit all Tourist attractions in Uganda.  The interested reader of this Column should contact Uganda Wild Life Authority for these offers.  Happy New Year.