The President of the Republic of Mozambique His Excellency Filipe Jacinto Nyusi has called upon the people of Nakaseke to make good use of Kapeeka Industrial Park to empower themselves and develop their country.

“One advantage is that this land which was in the past the birth of liberation is now the birth of development, so it’s important to say that we will empower our people for development. This is a place where employment is generated and by doing so, we can empower ourselves and develop,” President Filipe said.

Filipe was today speaking to the gathering at Kapeeka Industrial Park also known as Liao Shen Industrial Park in Nakaseke District after a guided tour of the different projects and their production chains. 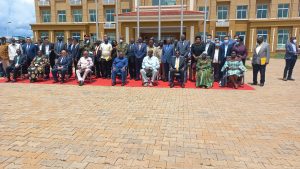 Mr Filipe noted that Mozambique will send a team of experts to acquire more knowledge on setting up Industrial parks which they have also started back home.

“Our visit was not in vain. We are happy to see industrial parks such as these in Uganda. We did not bring our businessmen this time but we will certainly do so and build up economic firms so that we can do things such as these as an example. One of the companies investing in these projects will, starting from this year operate in Mozambique,” he said, adding that this will also contribute to the wellbeing of veterans in Mozambique through engaging in productive work.

Before heading to Kapeeka Industrial Park, Mozambique President, Filipe Nyusi and delegates earlier visited Kawumu Presidential Demonstration farm and were received by the State House UnderSecretary Ms. Hope Nyakairu and were taken around on a guided tour of the different projects undertaken at the farm that included among others fish farming, poultry, coffee plantation, banana farming and rabbit farming (Cuniculture). 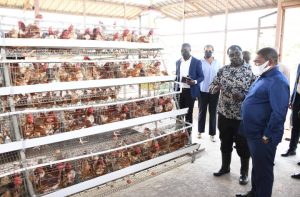 Kawumu Presidential Demonstration Farm located in Luwero district was commissioned in November 2016 by H.E the President Yoweri Kaguta Museveni, with the primary objective of promoting the 4-acre farming model and teaching farmers to adopt good farming innovativeness to create wealth. 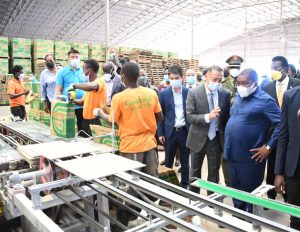 The ceremony was also attended by the Commissioner General of Prisons Canon Johnson Byabashaija, the Deputy Inspector General of Police Maj Gen Geoffrey Tumusiime Katsigazi, The Chief Political Commissar (CPC) of the UPDF Maj Gen Henry Matsiko and the veterans from Luwero Triangle.