Generals and MPs in action at MTN Omondi stadium

Members of Parliament (MPs) on Friday defeated the Uganda Peoples’ Defense Force (UPDF) Generals 3-1 in a friendly football match organized to celebrate the 48th birthday of the Commander of the Land Forces, Lt Gen Muhoozi Kainerugaba.

The match was played at the MTN Phillip Omondi Stadium in Lugogo, Kampala.

Speaking at the event, Deputy Speaker of Parliament, Thomas Tayebwa who was the Chief Guest, said games like these are good as they enhance the relationship between Parliament and the UPDF.

“While the game managed to have many goals in it, the main GOAL was to foster our friendship with the UPDF and all teams scored highly. I thank the UPDF and Parliament for organizing this occasion and look forward to more of such,” he noted.

The match was preceded by that between friends of Gen. Muhoozi and Ghetto Youth. The Ghetto Youth won the game 1:0. 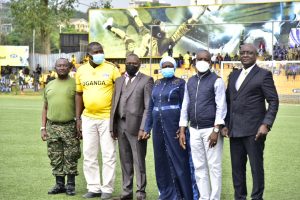 The goals for MPs were scored by ASanon Bwiire (2) from Bulamogi constituency in Kaliro district and Minister Peter Ogwang (1) while UPDF’s lone goal was scored by the CDF General Mbadi.

Chieftaincy of Military Intelligence (CMI) Chief Maj General James Birungi was the man of the match after he displayed classic football skills that left a number of parliamentarians on the ground. 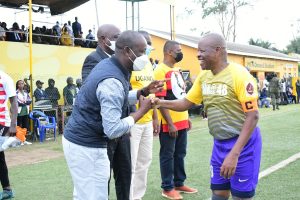 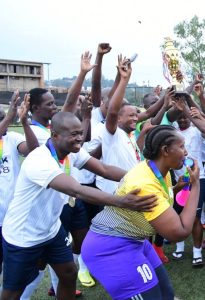