The incident happened on Wednesday a few kilometres from Kibiito town in Bunyangabu District.

“The ministry of Health would like to inform the public about pictures of a burning Ambulance circulating on social media. Our emergency care teams were transferring a referred patient from Bwera General Hospital to Fort Portal RRH in an Ambulance that caught fire while in transit at Kibiito,” the ministry said in a statement.

It said the Fort Portal emergency response team reported that five people were on board at the time of the fire that started in the patient’s cabin.

Three people were in the patients’ cabin (an emergency nurse, attendant and patient) and two in the front cabin (a driver and another attendant), according to the statement.

An ambulance from Bwera Hospital in Kasese caught fire along Kasese-Fort Portal highway, a few kilometers from kibito town in Bunyangabu District. Two of the occupants including a patient and nurse have died on spot.#CapitalNewsDesk

The ministry quoted reports indicating that three people in the patient cabin died while the two in the front cabin escaped with severe burns and were evacuated to Fort Portal Regional Referral Hospital for stabilisation and care.

According to media reports, the patient Robert Asaba, 53, a resident of Hamukungu in Lake Katwe Sub County, Kasese District was being evacuated to another hospital after referral.

The nursing officer was identified as Peter Baluku, 36, attached to Bwera Government Hospital in Mpondwe. Both Asaba and Baluku died on the spot. 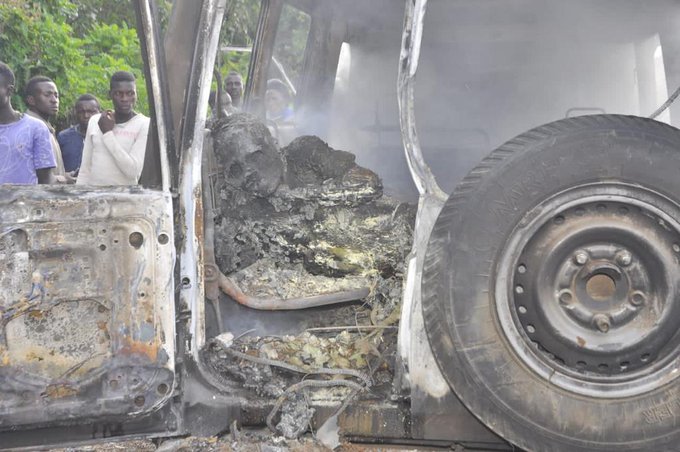 “The emergency medical services Department at the Ministry of Health has sent a team to evacuate the casualties who survived with severe burns to Kiruddu National Referral Hospital where there is a specialised burns unit to handle severe burns,” Health ministry said.

“The exact cause of the fire is not known. Investigations will be conducted by experts to establish the cause. We shall update the public as further information becomes available. We pray for the souls of the deceased to rest in eternal peace,” the ministry added.

The Ministry of Health regretted the unfortunate incident and extended sympathy to the families that have lost their loved ones.