The Executive Director of Uganda Media Centre, Ofwono Opondo, has said journalist Obed Katureebe is neither missing nor under arrest.

He went missing on Monday as the country celebrated Eid festivities.

Media reports said he was arrested from his Kyanja home by the Military.

The soldiers reportedly forced him into a waiting vehicle and later drove him away.

Opondo who doubles as the Government Spokesperson dismissed this narrative, saying Katureebe was not arrested and is “safe”.

Eriasa S. Mukiibi, a former Weekends Editor at Monitor Newspaper, got concerned and asked Opondo: “Ndugu @OfwonoOpondo, there’s information that one of your charges at the @UgandaMediaCent, @ObedKatureebe, was disappeared yesterday. Do you know where he is being held and why?”

Opondo replied: “Thanks for inquiring about @katurebeobed a Public Affairs Officer @UgandaMediaCent. Obed is under security protection because of threats allegedly against his person details of which am yet to be provided with. I have been assured that he’s safe and not under arrest.”

He added: “I can confidently state that @katurebeobed matter is being handled appropriately and professionally with those concerned. I will update the media when necessary.”

SoftPower News has established that Katureebe’s troubles could have started from across the border.

“It is suspected that Uncle complained to nephew which informed the arrest,” a source told us. 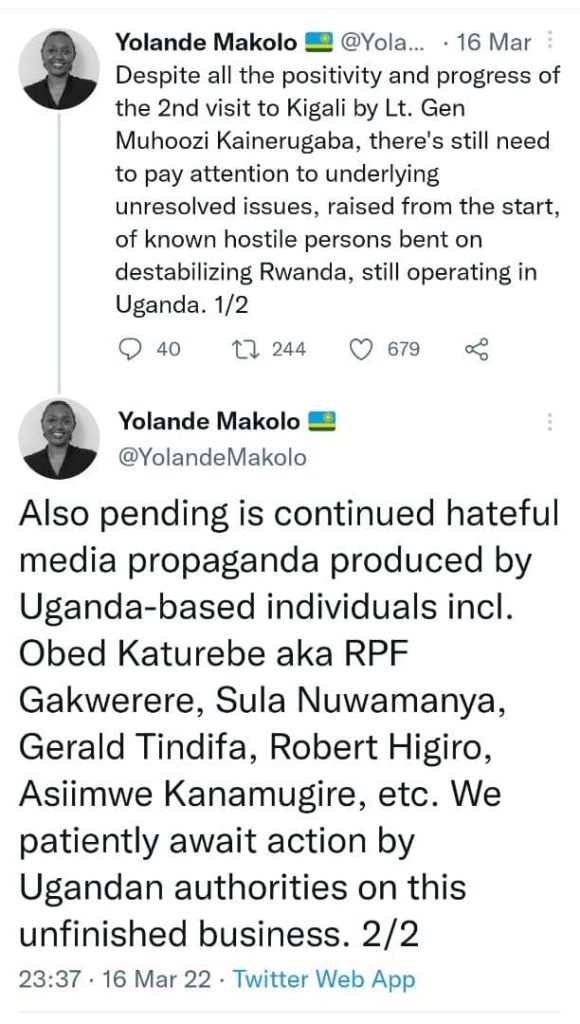 “Despite all the positivity and progress of the 2nd visit to Kigali by Lt Gen Muhoozi Kainerugaba, there’s still need to pay attention to underlying unresolved issues, raised from the start, of known hostile persons bent on destabilizing Rwanda, still operating in Uganda,” she said.

It is not yet clear whether Katureebe’s ordeal is the said “action by Ugandan authorities” or whether he is actually being protected from those who want to harm him for the same alleged matter.

In a March 11, 2022 piece titled “CONGRATS GEN. KAINERUGABA FOR ENDING UGANDA / RWANDA STANDOFF”, Katureebe congratulated Gen Muhoozi Kainerugaba for ending the Uganda – Rwanda standoff and clearly stated that he did not have links to the Gakwerere Twitter account.

“My big celebration though is that the two countries have ended the ‘capture’ of wrong elements on either side of the two countries that were profiteering in peddling wrong and dangerous information that kept the two great nations apart,” he wrote.

He added: “Personally, I have been wrongly rebelled a vitriolic critique of the Rwandan government who hides my identity through the pseudo names of some blogger who identifies himself as RPF Gakwerere.  So sad that I also have no idea about this blogger. I chose not to respond to the several accusations by several trolls in Rwanda because I knew no amount of talk would exonerate me as long as the two countries were still having a standoff. Thank God the standoff is over and there are now honest conversations between the two governments and the era of greedy information merchants is over. No doubt soon the real Gakwerere will be known.”

Before joining UMC, Katureebe worked at Daily Monitor and the Independent Magazine as a security and political reporter.