Andrew Oulanyah joined by supporters to celebrate as results indicated he was in clear lead.

Andrew Ojok Oulanyah, the flagbearer of the National Resistance Movement (NRM) has won the Omoro-County by-election, beating five other contenders.

At about 10:15 pm, Oulanyah was declared the winner by the Omoro district returning officer, Kagona Moses.

Speaking shortly after his victory, Ojok said he is happy to continue the unifying role of his late father.

“This is a very important victory especially given the number of voters, it is a big statement. I want to thank all the candidates who stood, they gave an alternative. I want to thank the party and local leadership.  This election should unite us, we need to come back together as leaders of Omoro,” he said.

He added, “Uganda, Omoro, Friends of JO, NRM , Parliament of Uganda, Campaign Team, all people of goodwill, thank you for honouring his memory! I’m humbled! Back to work.”

Earlier, the Electoral Commission chairman Simon Byabakama noted that the election was peaceful.

Through its Instagram, the NRM thanked the people of Omoro county for entrusting Oulanyah’s son with the mandate of representing them. 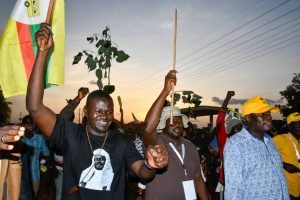 “Thank you our people of Omoro County for entrusting your son Ojok Andrew Oulanyah with the mandate of representing you in the 11th Parliament.
Andrew stands for continuity, reconciliation, unity and the implementation of the NRM development agenda in your constituency. Congratulations.”

Ojok is the son of the late Speaker of Parliament and former MP Omoro county, Jacob Oulanyah who passed on in March, 2022.