Next Media Services is realigning Next Radio staff as its 2022 focus shifts towards a Culture of High Performance.

This according to an internal memo signed by Group CEO Kin Kariisa which SoftPower confirmed as authentic.

The memo says now that the economy is fully opened, coupled with the need to innovate to meet ever-changing audience expectations, the company made a review of the performance of all Next Media brands.

“The findings indicate that the tastes and preferences of our next radio audience have since shifted, requiring us to realign ourselves to meet these demands,” reads the memo dated March 3, 2022.

It adds: “With immediate effect, there will be an extensive programmes review, including the realignment of all shows on next radio. As a result, all Next Radio personnel shall have scheduled engagements with the people and culture office on their new roles in line with these reviews during this period.” 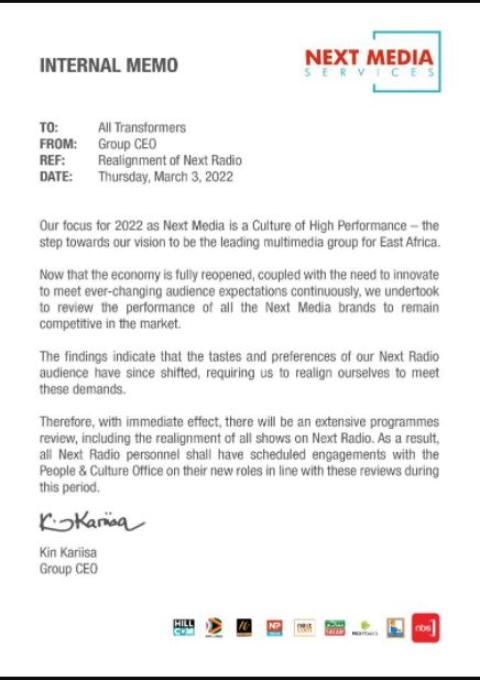 A source told us the company is rebranding but no staff members have been let go but “they are going to be reshuffled”.

These changes are expected to be effected within at least the next two weeks.