Museveni who was accompanied by First Lady Janet Museveni on Friday welcomed President Nyusi and the First Lady of Mozambique.

Nyusi is due to return home after a three-day State visit, according to Senior Press Secretary, Lindah Nabusayi.

President Museveni showed the Mozambique leader the beautiful Lake Victoria from State House and the natural species of trees in the compound as he arrived to take leave before returning home.

President Nyusi arrived in the country on Wednesday and held talks with President Museveni. 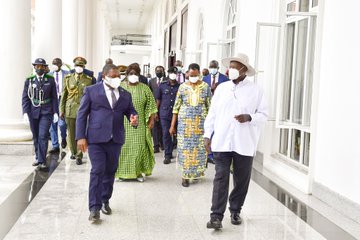 On Thursday, he visited Kapeeka Industrial Park also known as Liao Shen Industrial Park in Nakaseke District where he was taken on a guided tour of the different projects and their production chains.

Nyusi also visited Kawumu Presidential Demonstration farm where he was received by the State House Under-Secretary Ms. Hope Nyakairu and taken around on a guided tour of the different projects undertaken at the farm that included among others fish farming, poultry, coffee plantation, banana farming and rabbit farming (Cuniculture)

Kawumu Presidential Demonstration Farm located in Luwero district was commissioned in November 2016 by H.E the President Yoweri Kaguta Museveni, with the primary objective of promoting the 4-acre farming model and teaching farmers to adopt good farming innovativeness to create wealth. 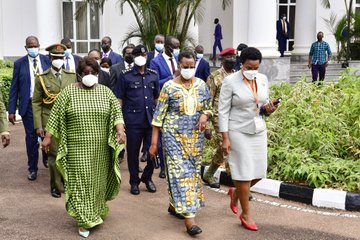