President Museveni Tuesday presided over the official opening of a two-day, 7th edition of the Uganda International Oil and Gas Summit.

The event is being held under the theme “Harnessing Uganda’s investment and growth”.

In his speech, Museveni cited about 1.4 billion barrels that can be pumped out and put through the East African Crude Oil pipeline and the refinery that shall be built.

He encouraged the oil companies to move on with the two projects; the refinery and the pipeline.

“I encourage the oil companies to move on the two, the refinery and the pipeline,” he said while addressing the audience at Serena hotel in Kampala.

He said EACOP will be used as well to transport gas to Uganda from Mozambique and Tanzania.

“While we have a lot of oil, we don’t have much gas while Tanzania and Mozambique have a lot of gas. The same corridor where EACOP will run can bring a return pipeline to transport gas to Uganda. This is one of the reasons why I am in support of the pipeline.”

“When I think about the past 1000 years, I think about less than 5 people who have contributed to the economic thought of the world and made an input,” said the president.

“I am more committed to the EACOP because it is maybe good for the integration of our energy plans with the coastal countries and we, in the inter-land.”

To the European Union Parliament, Museveni said Uganda’s oil and gas exploration plans will proceed as prior despite the wrongly-placed criticism from European Union MPs. 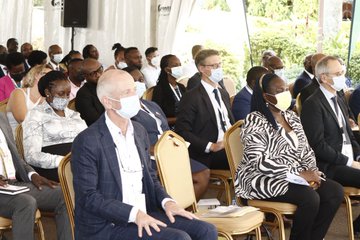 “I hope our partners join us firmly and advise…and to the EU Parliament, I want to say that the country’s Oil and Gas plan will be implemented per the schedule.”

The statement was followed by strong applause by the attendees.

He went on: “The European Parliament has got enough work to do in its own place. I would advise the MPs there to spend a bit more time doing that. East Africa has got more capable people who know what to do.”

"So shallow, so egocentric, so wrong, yet broadcast their ignorance all over the place" – President #Museveni on foreigners fighting #EACOP.

The President was speaking at the ongoing annual #Uganda international #oilandgas summit in Kampala.#SoftPowerNews #UIOG2022 pic.twitter.com/bps4OIbGTI

“Some of these EU MPs are insufferable and so wrong that they think they know everything but should calm down. This is the wrong battleground for them. I hope our partners join us firmly and advise them. For us, we’re moving forward with our program.”

He said EACOP is a wrong battleground for them and that they should stop broadcasting their ignorance all over the place.

“These MPs are young girls and should not lecture me on what to do in Uganda. They should calm down; somebody should counsel them.”