President Museveni hands over a portrait at Kololo ceremonial grounds

President Museveni has said that the only way to empower women is by ensuring that women are empowered economically.

He was speaking at the International Women’s Day celebrations on Tuesday, March 8, 2022, at Kololo Independence Grounds under the theme: “Gender Equality Today for a sustainable tomorrow”.

He went on to add that women cannot be empowered in a stagnated society because if the society does not transition, then there is no way the marginalised groups will be transformed by themselves.

He further cautioned against working for the stomach only.

“To have a modern and better life, you must be part of the money economy,” the President advised.

Hon. Betty Amongi, the Minister of Gender, Labour and Social Development, said that women’s day is a day of reflection on the achievements and actions that are required to be taken to close the gap in the advancement of women’s agenda.

“We know gaps are still there and coming together allows us to build consensus and engage,” she said.

Ms Susan Ngongi Namondo, the United Nations Resident Representative in Uganda, said that the UN system in Uganda recognizes and applauds the government of Uganda for their visible commitments and efforts to advance women agenda and development progress being made both globally and nationally across Social Development Goals (SDGs); poverty eradication programs, health, education etc; great inequality still prevails across board.

“We will need to make more progress towards gender equality and women empowerment for Uganda to achieve her vision 2040,” Ms Namondo stated. 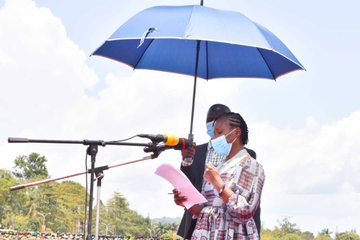 She further observed that gender equality is an enabler, an accelerator, and a catalyst towards national development.

Hajati Farida Kiibowa, the National Chairperson of the Women’s Council said that Women’s Day celebrations are meant to take stock of commitments and different government initiatives that the country has put in place to engender women empowerment and development.

“We call upon all leaders to provide a safe environment for all the girls that could have been affected by the Covid-19 pandemic especially the issue of teenage pregnancies,” she said.