Museveni, Abiy Agree to ‘Walk Together’ on Matters of Mutual Interest

Museveni, Abiy Agree to ‘Walk Together’ on Matters of Mutual Interest

The Prime Minister of Ethiopia, Abiy Ahmed has Sunday held talks with his Ugandan counterpart, Yoweri Museveni at State House Entebbe on bilateral, regional and international issues of mutual interest.

Abiy is in Uganda for a one day working visit at the invitation of President Museveni.

In a tweet, President Yoweri Museveni says they have agreed to walk together on strengthening matters of common interest.

The meeting with H.E @AbiyAhmedAli ended fruitfully. We agreed to 'walk together' on matters regarding strengthening cooperation in bilateral, regional, and international issues of common interest. pic.twitter.com/qgNq8WhAzp

Ethiopia and Uganda have been cooperating in various peace processes in the region. The meeting was attended by the Ethiopian Minister – Head of Prosperity Party Main Office H.E. Binalf Anduwalem, the State Minister for Foreign Affairs of Ethiopia H.E Redwan Hussain and H.E Alemtsehay Meseret, Ambassador Plenipotentiary and Extraordinary to the Republic of Uganda.

It remains unclear whether the two leaders discussed the current conflict in Tigray and the standoff over the Grand Ethiopian Renaissance Dam (GERD).

The hydropower dam on the Blue Nile built by Ethiopia, when completed will become Africa’s largest hydroelectric power generator and the world’s seventh-largest dam. The project has however turned out to be the major cause of a diplomatic standoff between Ethiopia and her neighbours Sudan and Egypt for nearly 10 years.

Ethiopia recently filled the reservoir behind the dam for a second year but Egypt regards the project as an existential threat to its water supplies. Sudan on the other hand is concerned about the safety and effect of the dam on its own dams and power stations.

Talks to resolve the matter facilitated by Washington hit a dead end last year and efforts to relaunch them by the African Union in Kinsasha early this year did not succeed, prompting Sudan and Egypt to call-on the United States, the European Union and the United Nations to mediate directly.

Ethiopia which says it is ready for negotiations, has been routing for an Africa-led solution. Speaking to journalists in Kampala last month, Ethiopia’s ambassador to Uganda, H.E Alemtsehay Meseret said that there is no need for the two countries to involve the international community in the matter that the African Union is ably and competently handling.

In May this year, President Museveni pledged to contact the Ethiopian Prime Minister, Abi Ahmed, as soon as possible, aiming at bringing all parties’ points of view closer on the GERD and to start another round of ‘serious negotiations’ on this issue.

The President made the pledge during a meeting with Sudanese Foreign affairs Minister Maryam Al-Sadiq Al-Mahdi, where he praised Sudan’s role in the African continent and its ‘peaceful initiatives’.

According to Sudan News Agency (SUNA), Museveni stressed Uganda’s support for ‘dialogue leading to the achievement mutual gains among all three parties of GERD.

He indicated that the correct approach to address the points of disagreement is to agree on a ‘specific strategic vision for managing the Nile waters.’

Museveni is quoted to have noted that filling and operating the dam requires consideration the environmental aspects as well. As he stressed on understanding Sudan’s stance which is calling for ‘productive negotiations’ leading to results that will satisfy all parties.

The meeting comes amid regional calls for President Yoweri Museveni to mediate in the worsening conflict in Tigray, Afar and Amhara regions in Ethiopia where the TPLF armed groups are fighting.

The current conflict in Tigray which has caused death, suffering and displacement of thousands of people, was sparked by an unprovoked violent attack by the TPLF armed groups on Federal forces in November last year after over two years of provocation.

They wanted to acquire over 80% of the National army’s possession which was in the region and illegally and forcefully change the leadership of the country.

TPLF was among the many armed groups that fought the Federal Military Rule in the 1970s and 1980s, a communist in Ideology and establishing an Independent Tigray was its ultimate goal.

Later in the downfall of the Military regime, TPLF in coalition with other Ethnic based parties formed EPRDF and ruled the country for 27 years. Under TPLF, millions of Ethiopians had suffered widespread political repressions, economic as well as social marginalization for twenty seven years.

However, after waves of popular protests that swept across the country and internal struggles within the ruling party for almost two years, Prime Minister, Dr. Abiy Ahmed came to power in April 2018.

Among the others, the Government of Ethiopia released political prisoners and journalists and invited exiled political parties and armed groups to take part in peaceful political contestations.

The new leadership did not take any retributive measures against TPLF as a vengeful punishment as some people continue to wrongly claim.

However, angered by the unexpected loss of the disproportionate influence and undue privilege they enjoyed, powerful figures within the TPLF led the clique into self-isolation and a senseless blame game.

They heavily involved in planning and implementing violence and conflicts seen in the country since the coming into power of PM Abiy Ahmed.

TPLF have shown the world that if it does not maintain its grip on power entirely, it is ready to disturb the country at the cost of millions of innocent lives.

In fact, TPLF officials were boastfully telling their foreign sympathizers that they would go for a war if a blockage is placed on their way to maintaining hegemony.

Prime Minister has severally expressed his deepest desire that the government did not want to hear a single gun-shot in Tigray, and indeed this desire had captured the whole conviction of the Ethiopian government until everything had to change on Wednesday, 4th of November 2020 when the armed group attacked military bases.

Government said the unfortunate political development and conflict in Tigray was not the interest of their interest, if it was not obligated by the blatant attack of TPLF on the National Defence force of the country.

TPLF’s intention was to break the chain of command of the Defense force and acquire over 80% of the National Army’s possession, which was in the region, and change the leadership of the country forcefully. Thanks to the swift response and effective law enforcement and primary support of the Public, the danger posed by TPLF.

Ethiopian authorities continue with efforts to restore normalcy including declaring a Unilateral Ceasefire and removing the National Army from the whole of Tigray in June as well as providing support to citizens affected by the operation in the region.

But these efforts are hampered by the TPLF fighters who continue to attack and kill civilians, recruit children into fighting in not only Tigray but also extending to neighbouring Amhara and Afar regions. They also block and attack vehicles taking humanitarian support.

The two leaders have a cordial relationship. On Heroes’ day in Uganda in 2018, Prime minister, Abiy Ahmed Ali who was a special guest, was honoured with the Most Excellent Order of the Pearl of Africa medal, Uganda’s highest accolade given to a head of state at a special National Heroes Day by president Yoweri Kaguta Museveni.

The award is in recognition of Abiy’s immense contribution to the independence struggle of Africa. In return, Abiy gave Museveni a colourful Ethiopian made white jacket with black and red stripes, which are the traditional colours of the Oromo people in Ethiopia.

Addressing crowds gathered for the occasion, Dr Abiy Ahmed Ali noted “Our relationship is built on a strong foundation of understanding and mutual respect not to interfere with each others internal affairs.” 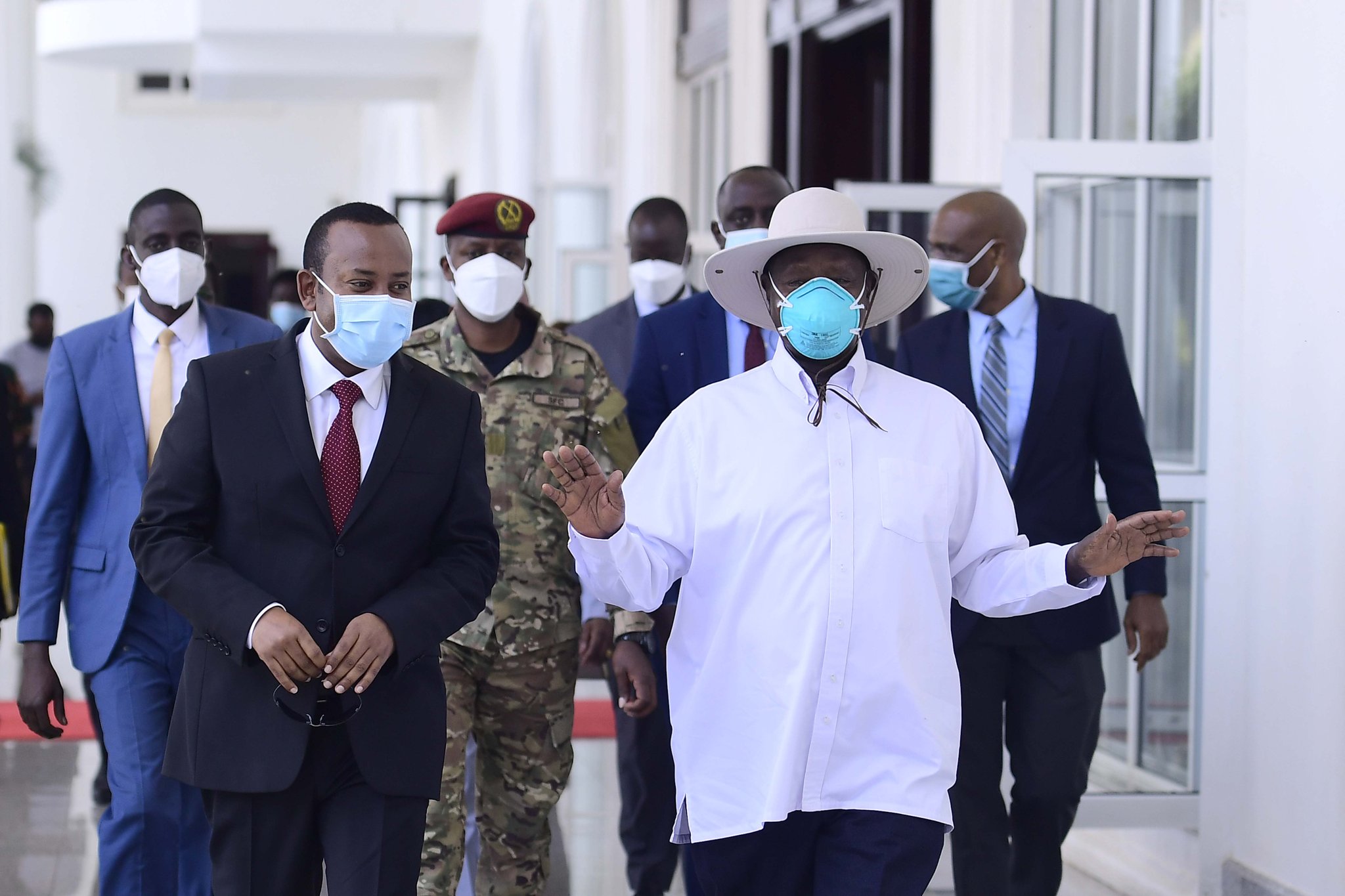 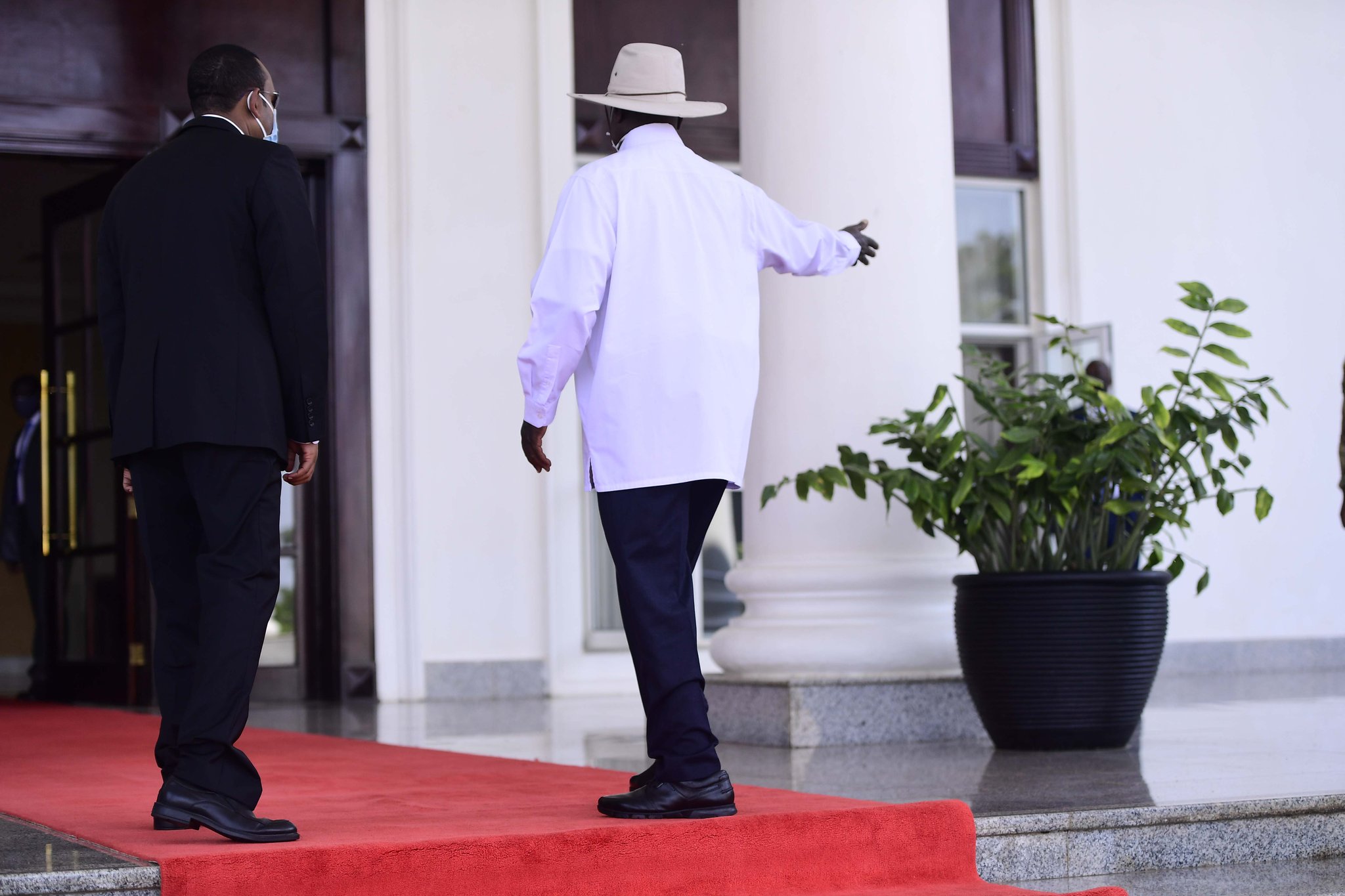 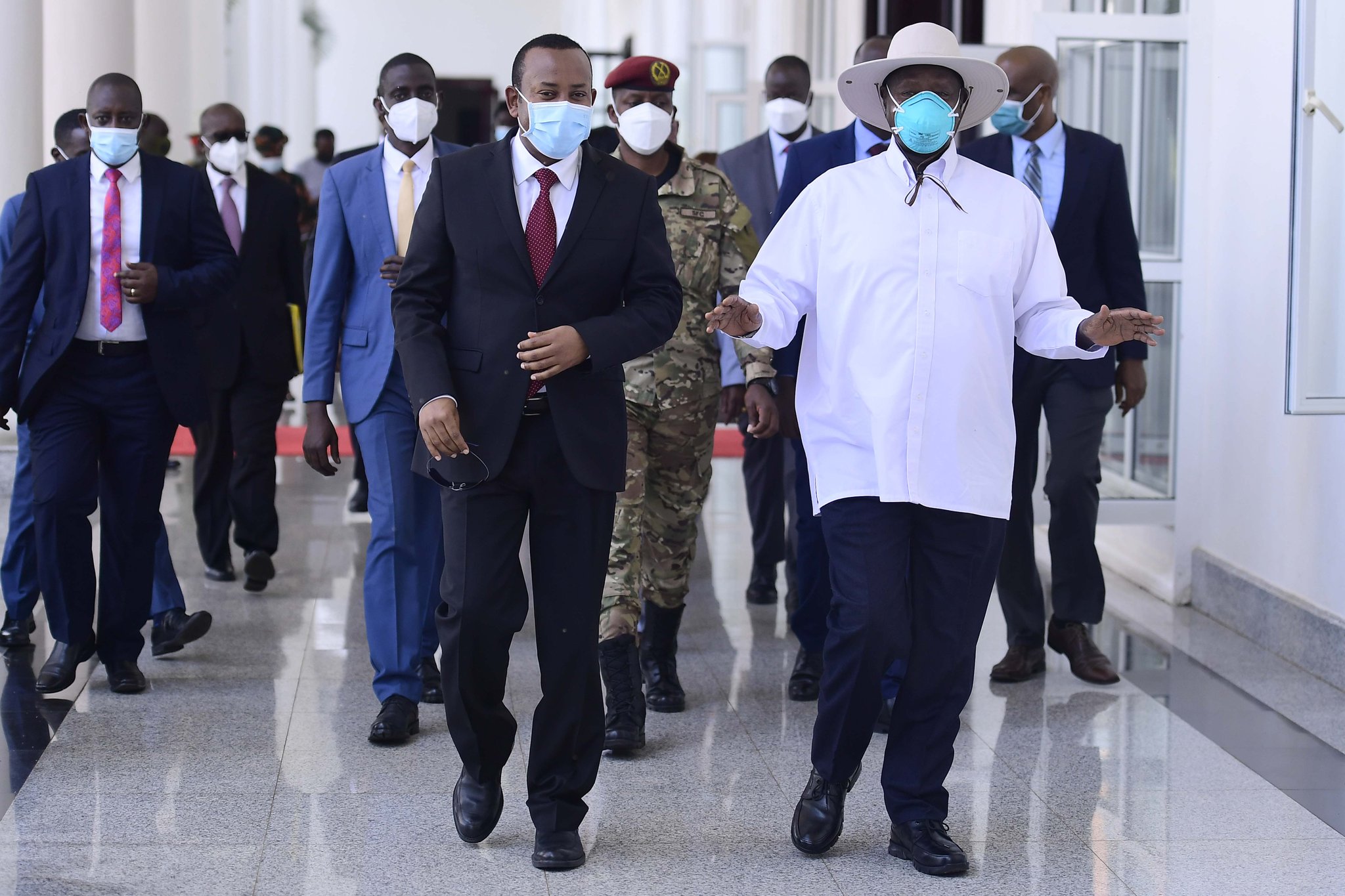 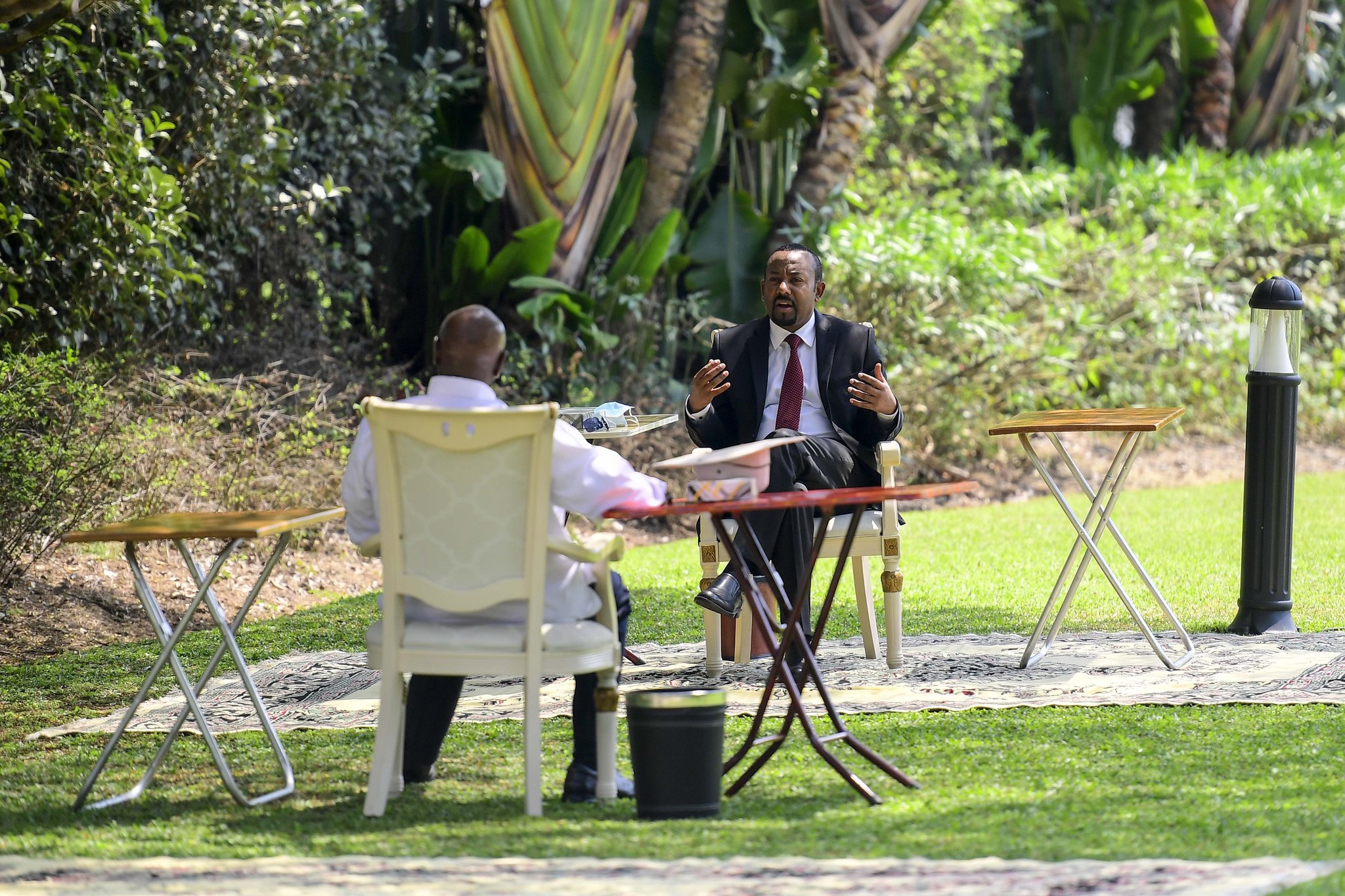