President Yoweri Museveni has expressed regret over the demise of the former speaker of parliament, Jacob Oulanyah, saying losing him is a big loss

“Losing Oulanyah is a big loss. He was coming up and we were going to get a lot of benefits from him. He had already done a good job in uniting Nortern Uganda. Northern Uganda had been messed up by bad politics,”

The president made the statement while addressing mourners during the national vigil of the fallen speaker held at Kololo Ceremonial Grounds in Kampala today Wednesday. Oulanyah succumbed to cancer in Seattle, USA on March 20, 2022.

Museveni explained that Oulanyah became too busy with national politics while canvassing votes to retain his Omoro County seat, and also while contesting for the national vice chairperson of the National Resistance Movement (NRM) party for northern Uganda.

Museveni noted that at the same time, Oulanyah had expressed interest to contest as speaker for the 11th parliament, forcing him to pay less attention to his health which later deteriorated and cost him to pay the ultimate price. 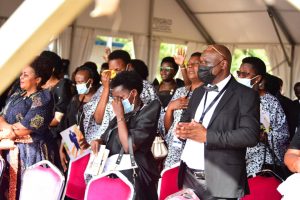 “I need to salute Oulanyah and commend him as an example to you people, but again, I don’t want to hear talk of northern, northern. Stop that Oulanyah was not speaker of the north, he was speaker of Uganda. So when you hear opportunists the ones who are looking to eat, tell them to shut up,” said Museveni.

Museveni lauded Oulanyah for being a loyal and disciplined cadre, and a nationalist who achieved reuniting the people of northern Uganda and galvanized support for the NRM without tribal inclinations.

“What is clear if he had contacted me and told me that he had these issues to deal with and he also had to deal with the politics here – in Omoro constituency, vice chairman NRM northern, speakership all this time. If I had known, I would have told him to concentrate on health but I didn’t know. Health is wealth and a weapon and you need to look after it. Don’t play around with health,” said Museveni.

The national vigil was led by the Archbishop of the Church of Uganda Dr Stephen Kaziimba Mugalu and attended by bereaved family members, chief justice Alfonse Owiny-Dollo, legislators, ministers and foreign dignitaries from Kenya, Tanzania, DRC and Rwanda among others.

Oulanyah, 56, was an agricultural economist and a lawyer, who served as the speaker of the 11th parliament of Uganda from 2021 until 2022. He becomes the first serving speaker to die in office.

Dr Jackson Orem, the executive director of Uganda Cancer Institute Mulago who led a team of 15 doctors who managed the deceased’s condition reiterated at the vigil that Oulanyah became too busy with parliamentary work, and skipped sequences of his recommended treatment compromised his health.

His body was airlifted to Ayomlony village, Lalogi Town Council in Omoro district for the final send-off slated for April 8. Oulanyah also served as deputy speaker from May 2011 until May 2021. He was born in the then Gulu district to Nathan Okori and Karen Atwon.

He attended St. Joseph’s College Layibi, Dr. Obote College Boroboro, and Kololo senior secondary school for his O’level and A’level education before joining Makerere University in 1988 and graduating in 1991 with a Bachelor of Arts.urn