The leadership of Lira City through the Mayor, Mr. Sam Atul, has recognized the UPDF Engineers Brigade for constructing Lira Industrial Park, among other projects.

This was observed by the Lira City Mayor during a guided tour of the city by course participants from the National Defence College – Uganda (NDC – U).

The tour aims at assessing the success and challenges involved in following government interventions that root for development.

Mr. Otul, however, mentioned that the bureaucracy involved in implementing government interventions and projects, and the lack of proper transport systems and electricity in most parts of Lango region have led to environmental degradation as farmers resort to deforestation to power their machinery in a bid to add value to their agricultural products. 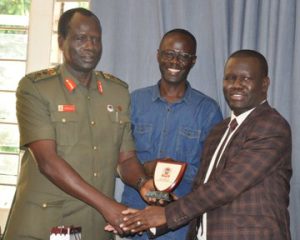 This factory produces about 200,000 tons per year of cooking oil and harvests produce from over 3,000 farmers.

Maj Gen Francis Okello, the Commandant of the NDC-U, and Team Leader urged local authorities to continue supporting the farmers so as to improve the quality and quantity of the yield.

The Lira leadership thanked the President and Commander-In-Chief of the UPDF, H.E Gen Yoweri Museveni, for building a modern, efficient and professional army that has provided peace and security for social-economic transformation to take root.

Course participants continue with their tour of the Northern region to acquaint themselves with major installations that enormously contribute to social-economic growth and development.