The wreckage of MV Templar floating on the surface moments after it was retrieved. (Photos: Police)

The wreckage of the MV Templar boat which sunk into Lake Victoria five days ago killing over 30 people has finally been dragged out of the lake bed to the surface after days of unsuccessful attempts.

The vessel was Thursday pulled out of the waters in an effort led by UPDF, Police, Ministry of Works and other actors. Since Sunday, there have been attempts to retrieve the wreckage with hope of finding bodies of people who remain unaccounted for.

Initially, the efforts to fish out the heavy vessel were stalled by weak cables which could not withstand the weight. On Thursday, the personnel at the fore of the operation obtained more stronger cables from the Uganda Railways which were then fastened on bulldozers and the wreckage.

Once fastened, the bulldozers then began to pull backwards as the MV Templar slowly began to emerge from beneath the surface. However, a few metres to the shores, the cables again disintegrated leaving the boat floating on the waters.

By publication time, the divers were still searching the floor of the lake where MV Templar has been sitting since Saturday to find any trapped bodies. The compartments of the boat where it is suspected some other persons on board could have hid are also being combed.

Meanwhile, Assistant Inspector General of Police (AIGP) Asuman Mugyenyi, the Police Director for Operations who is leading the operation at Mutima beach said that Police has established desks at Mukono police station and the Central Police Station in Kampala to receive information that can aid investigations.

He asked survivors, those that lost property on the boat as well as those with complaints relating to missing persons to approach the desks in Mukono and Kampala.

In a related development, proprietors of Mutima beach, the area that the operation to rescue and retrieve has been based, have threatened to sue government agencies involved in the operation for the damage caused on their ecosystem and the loss their business has suffered since Sunday.

But AIGP Mugyenyi advised the aggrieved parties to proceed and take legal action, if they so wish, saying that the security agencies are more concerned with completing the operation.

Saturday’s accident has so far claimed 33 people and 27 people have since been rescued. As of Wednesday, five people were said to be unaccounted for.

Police revealed today that one of those missing, identified as Erone, a student of Makerere University has surfaced. Reports state that she managed to survive the incident but had not returned home until today.

However, another person identified as Adongo has now been added to the list of those missing, according to Police. 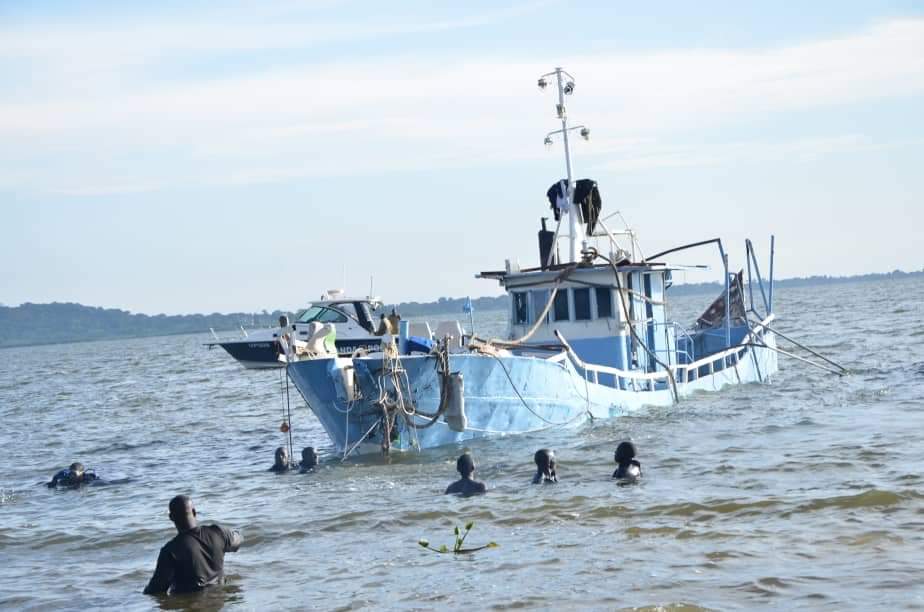