One of the survivors of Kisoro Landslides, receives cash relief from Red Cross

The Cash transfer follows a relief-non food items distributed on January 26. after 9 people died in mudslides and landslides that ravaged Kisoro, and left hundreds displaced.

According to Joram Musinguzi, the Cash Transfer Program Specialist at Uganda Red Cross, 224 families received Shs 66.8 million to enable them develop coping mechanisms.
I
The families were from the areas of Nyarusiza, Muramba and Bunagana Sub-counties.

These, received the multipurpose cash to enable them meet immediate needs such as food, digging kits and shelter restoration.

Rukundo noted that the cash given was based on the Minimum Expenditure Basket (MEB) assessment conducted of 35,000 for food, 30,000 ugx for digging kits plus 300,000 for shelter.

He noted that the cash transfer will help, allow people make choices of what they need, “This promotes dignity, Instead of just determining what we need to give to the affected families, we then give them money to meet their immediate needs.”

Rukundo also called upon the community to utilise the funds in a way that is befitting.

He appealed to the beneficiaries who have received Cash to utilize it well and cope amidst the many competing family priorities.

ECHO extended this support through the Netherlands Red Cross led consortium in Uganda. 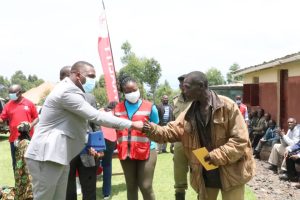