President Yoweri Museveni has cited a need to stabilize the sugar market if Uganda is to benefit from the booming industry.

“And stabilization means we give confidence to our buyers,” said Museveni while meeting members of the Presidential Advisory Committee on Exports and Industrial Development (PACEID) who called on him at his Kisozi Country home in Gomba District.

According to the President, this will be possible through having a consistent supply of cane to the sugar companies which will result into stable production of the profitable good.
This means sugar companies need to grow their own cane.

“I told you sugar companies, you should grow your own canes,” Museveni said.
He also asked sugar growers to adopt the model of the British American Tobacco (BAT) of using known and registered or contracted out-growers not just freelance growers.

The President further said that the shortage of cane is due to the large number of freelance growers who rushed in cane growing, leading to over production which led to low demand within East Africa because of trade barriers. 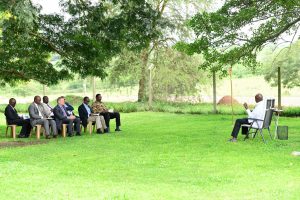 “So that’s your mistake. If you take my formula of a nucleus farm plus registered, contracted and known large-scale or medium scale out-growers, this will be solved,” Museveni said during a meeting also attended by some members of Uganda Sugar Manufacturers Association and prospective investors in sugar and other products.

In July this year, sugar retail prices across the country shot up to over Shs6000 after three of Uganda’s biggest mills admitted to an acute shortage of mature sugarcane.

In the same meeting, the President further asked the Presidential Advisory Committee on Exports and Industrial Development to discuss with sugar companies together with the Ministry of Trade and Industry to establish a regulatory arm that will deal with the issue of sugar quantities and pricing.

“We are going to meet now with the sugar people and execute the things you have said here,” said Mr Odrek Rwabwogo, a Senior Presidential Advisor on Special Duties who also chairs the Presidential Advisory Committee on Trade and Industrial Development.

The Presidential Advisory Committee on Exports and Industrial Development was established in March 2022 by the President of Uganda to facilitate business people to address strategic and operational bottlenecks that are currently impeding trade.

The committee targets new export revenue of 6 billion dollars from the current 5.6 billion.

In the same meeting, were two prospective investors who included Mr. Mahmood Nudda who deals in export of fruits and vegetables with a target of 198 million dollars and Mr. Sean Flanagan of Commodities Partners who wants to buy and export Ugandan sugar.

President Museveni assured Mr. Flanagan of a ready market for Ugandan sugar within the region in countries like South Sudan, DRC and Western Ethiopia.

“I can assure you that here you can make money. You should target the internal market of this huge continent because I am a witness,” the President said, adding, that he had to close bonded warehouses that were importing sugar from Brazil.

This was to allow sugar quantities to come up so that we have buyers from outside taking our sugar instead of bringing in Brazilian sugar, according to Rwabwogo.
The estimated sugar production for 2022 is 822,000 metric tons, out of which 720,000 tons is meant to be brown sugar.

The meeting was also attended by the Chairman Uganda Sugar Manufacturers & Association, Mr. Jim Kabeho, the Vice Chairman Presidential Advisory Committee on Exports and Industrial Development Mr. Moses K Sabiiti and Mr. Mathew Bagonza who is an executive member of the export committee.