President Yoweri Kaguta Museveni, the Commander in Chief of Uganda’s armed forces, has promoted Muhoozi Kainerugaba from the rank of Lieutenant General to a full General.

Muhoozi was also dropped from his position as Commander of UPDF Land Forces.

He was replaced by Kayanja Muhanga who has also been promoted from the rank of Major General to Lieutenant General.

The changes follow a spate of tweets by Lt Gen Muhoozi.

In the tweets which he later apologised for, Muhoozi said his “army” can capture Nairobi, the capital city of Kenya, in less than two weeks.

“It would take us, my army and me two weeks to capture Nairobi. After we capture Nairobi, where should I live? Westlands? Riverside?,” Muhoozi tweeted.

His tweets were received with criticism from broth Kenya and Uganda.

In another tweet, Muhoozi said Jesus Christ had instructed him to change the situation of old people being in charge of Uganda for 40 years.

“In 2026, it will be 40 years of the old people in charge. That will change. Those are instructions from Jesus Christ! Our generation will be in charge of this country,” he tweeted.

On Tuesday afternoon, The Ministry of Foreign Affairs of the Republic of Uganda distanced the country from the tweets.

In a statement, the Ministry emphasized that the Government and the people of the Republic of Uganda treasure the existing strong bilateral relations between the people and the Government of the Republic of Kenya based on the two countries’ shared history, common values, mutual respect, trust and the desire to build a unified East African Community.

This came on the heels of a morning meeting between Vincent Bagiire, the Permanent Secretary of Uganda’s Ministry of Foreign Affairs and Kenya’s High Commissioner to Uganda, H.E. Maj Gen (Rtd) George Aggrey Owino.

“To this end, the Government of the Republic of Uganda wishes to reiterate its commitment to good neighbourliness, peaceful co-existence and cooperation,” the statement read.

The Ministry clarified that the Government of the Republic of Uganda does not conduct its Foreign Policy and other official business through social media nor does it depend on social media sources in dealing with other sovereign Governments.

Earlier on Tuesday, Gen Muhoozi alerted the country of the impending changes.

“Had a good discussion with my great father this morning. Apparently, my tweets scared Kenyans too much? He will announce the changes. There is a special prayer I shall make for our army.🙏,” he tweeted.

He also edited his Twitter profile to reflect only his duties as Special Presidential Advisor for Special Operations. He removed his title as Commander Land Forces.

When the news of his promotion later came to the public fore, he again took to Twitter to celebrate.

” We are going to have a celebration down Kampala Road for this rank. I thank my father for this great honor! 🙏”

Adding,” who should I appoint to that committee, we have to own Kampala Road.” 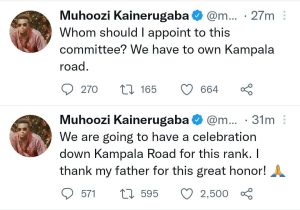 Muhoozi was born on 24 April 1974 and previously served as the Special Forces Commander (CSFC).