A member of the Uganda Law Society has dragged Uganda Peoples’ Defence Force (UPDF) Land Forces Commander Lt Gen Muhoozi Kainerugaba to courts of law for holding political events when he is still a serving member of the national army.

The petitioner Gawaya Tegulle is a practicing advocate of Uganda Courts of Judicature and also a Human Rights, Constitutionalism and Good Governance activist.

In a petition filed in the Constitutional Court in Kampala Friday, May 6, 2022, Tegulle sued Gen Muhoozi, the Chief of Defence Forces (CDF) Gen Wilson Mbadi and Attorney General, Kiryowa Kiwanuka.

The petition signed by the court registrar on May 6, informs the respondents that they are required to file an answer within 10 days after the petition has been served to them.

Tegulle is suing Gen Muhoozi as a serving army officer and Commander of Land Forces, CDF Gen Mbadi who has a duty to oversee the military arm of the government and run the affairs of the said military in a manner unswervingly and unfailing consistent with and as envisaged by the Constitution of the Republic of Uganda and AG Kiwanuka as the Principal Legal Advisor to the government who is constitutionally mandated to advise, offer legal services and represent the government in court if sued.

He says the acts of the 1st Respondent (Muhoozi) dubbed as “MK@48” including national and district birthday celebrations as well as political pronouncements in general and the manifest presidential campaigns in particular on his Twitter handle are inconsistent with and a contravention of Article 208 (2) of the constitution which provides that “the Uganda Peoples’ Defence Forces shall be non-partisan, national in character, patriotic, professional, disciplined, productive and subordinate to the civilian authority as established under this constitution and also in violation of Articles 2,3,209 and 210”.

The petitioner contends that the failure of the 2nd Respondent (Gen Mbadi) to advise or warn the 1st Respondent about the legality and untenable nature of his actions, character and conduct amounts to failure to provide due leadership, guidance, oversight and command expected of a conscientious and competent chief of defence forces.

The petitioner further contends that the 3rd respondent has omitted, failed or otherwise refused to provide good, fitting and proper legal advice and guidance to the UPDF in general and the 1st Respondent in particular that the acts and overtones of the 1st Respondent are manifestly unconstitutional and not tenable in the army which is supposed to be professional, non-partisan and of good character, thereby offending Articles 2 and 119 (4) (a) of the constitution.

“The above acts of the 1st Respondent in as far as they infringe and violate the constitution are inconsistent with and a contravention of article 3 of the constitution rending him liable for punishment in accordance with the law,” reads Tegulle’s petition.

“The 1st Respondent who also happens to be the son of the current President of the Republic of Uganda, Gen Yoweri Kaguta Tibuhaburwa Museveni, is enjoying unlawful and unconstitutional preferential treatment from the UPDF and is not being duly reprimanded, supervised or otherwise called to order by the 2nd Respondent simply because he is the son of the president which manifestly offends Article 21 that provides for equality before and under the law.”

Tegulle also faults Muhoozi for allegedly promoting the Chwezi dynasty through the succession of the incumbent president and his father as well as the National Resistance Movement (NRM) party.

“The activities of MK@48 and the Twitter handle of the 1st Respondent are political in nature aimed at taking over power as successor to his father using methods and means not consistent with the Grundnorm,” Tegulle alleges.

He said the inaction or loud silence is equivalent to the approval or sanction by the UPDF establishment of the activities of the 1st Respondent who is both a serving officer and son of the CiC.

He said previous political overtones serving army officers like Gen David Tinyefuza (now Sejusa) and Maj Gen Henry Tumukunde have been met with “quick, malevolent crackdowns by the UPDF which included suspensions and court proceedings in the name of disciplinary sanction, a manifestation of discriminatory approach in application and enforcement of the law”.

“The totality of the 1st Respondent’s acts amount to the 1st respondent as a serving officer of the UPDF being: partisan, unprofessional, indisciplined, not of good character.”

According to Tegulle, UPDF and other security operatives were deployed to provide security and keep law and order on Muhoozi’ birthday which was an expenditure charged on the Consolidated Fund to benefit celebrations that were private and not a service to the government.

He says the withdrawal of funds to pay the security operatives deployed to provide security and guard services on the birthday was not authorised by law.

“The actions, conduct and character of the 1st Respondent set a bad example to the nation in general and do jeopardize the rule of law, respect of the constitution and the breeding of good, disciplined, law-abiding citizens…” Tegulle further alleged.

“That it is in great public interest that the 1st respondent’s actions, character and conduct be declared illegal and unconstitutional in order to redeem the sanctity of the Constitution of the Republic of Uganda and to also restore harmony and public confidence in the Uganda Peoples defence forces (UPDF) which is supposed to be a national army.” 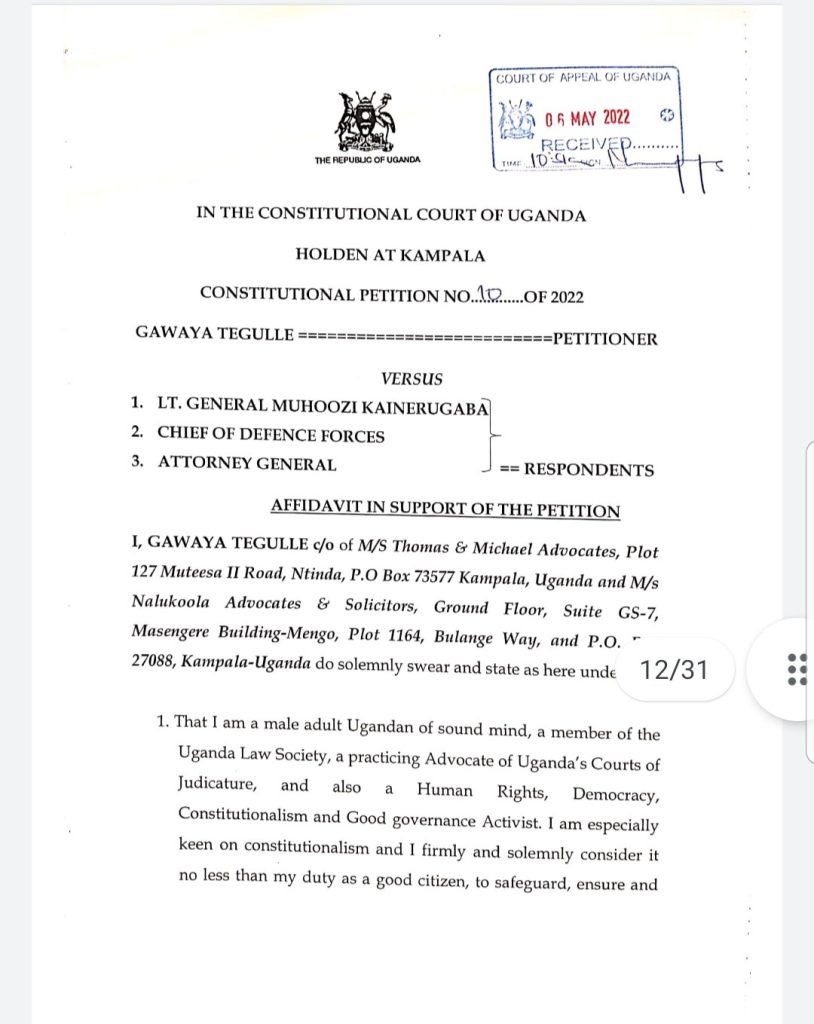 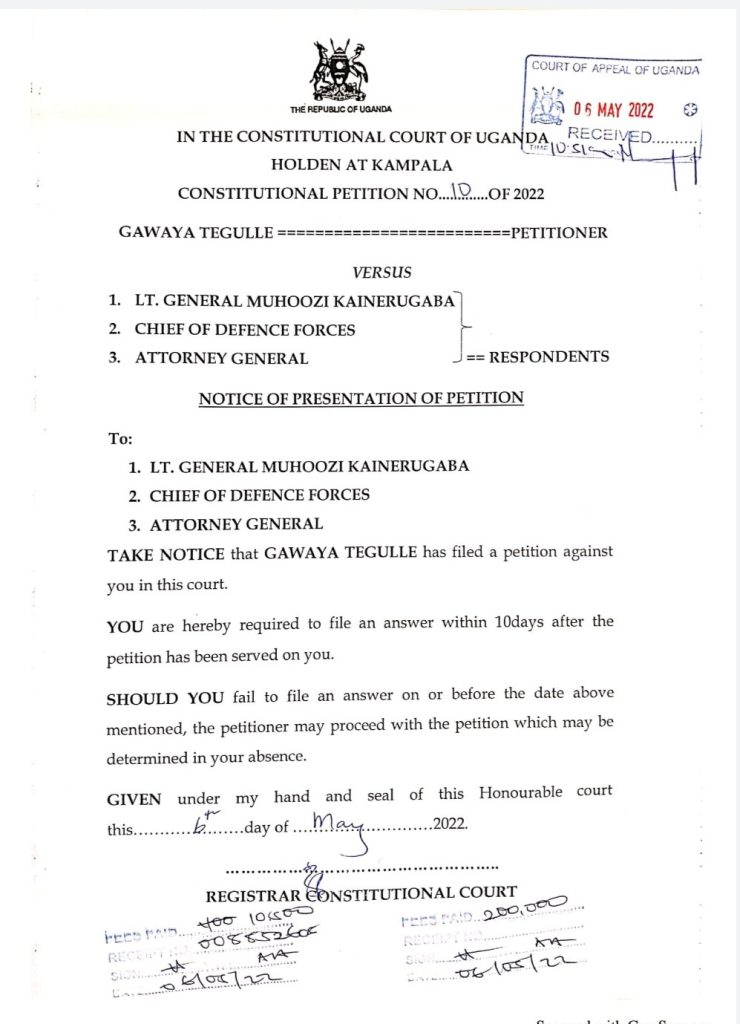