Dr Mukiza: UBOS will use Sports in Advocacy & Publicity for 2023 Population and Housing Census

Dr Mukiza: UBOS will use Sports in Advocacy & Publicity for 2023 Population and Housing Census

Uganda Bureau of Statistics (UBOS) Executive Director, Dr Chris Mukiza Ndatira, has said the bureau will use sports during the advocacy and publicity for the 2023 Population and Housing Census.

He made the remarks Tuesday while receiving a trophy won by the UBOS sports team against the joint Universities in the Statistics Week Competition.

The team Captain, Geoffrey Ssemwogerere, handed over the trophy to Dr Mukiza at Statistics House in Kampala to celebrate the victory at a goat-roast fete.

Dr Mukiza was also gifted a Jersey with an acronym to his name “CNM” for Chris Ndatira Mukiza.

He promised that the team will participate in the advocacy and publicity of the 2023 Population and Housing Census. A coaster has been dedicated to facilitating the team’s movements.

He encouraged members present to use sports as an avenue for team building. “Sports is about three things. Discipline, teamwork and health,” he stated.

He said a good sportsperson should observe good discipline, good health (for the individual and community) and ensure teamwork (coming together) which is one of the bureau’s core values.

“This is a very good beginning. Discipline should be the pillar,” he noted, adding that the planning for the next financial year will focus on promoting sports for wellness at work, strengthening teamwork and improving the publicity (corporate image) of the bureau.

“Sports help you penetrate the hearts of the people. If we embrace sports, we will achieve unity in the country.” He said the bureau will slowly build a robust team and promised the players a cow for the next victory.

To crown up the Statistics Seminar at Makerere University, there was a match between UBOS and the University students on Thursday, November 17, 2022, in which UBOS emerged as the winner.

The trophy was handed over to the team by Dr James Wokadhala, the Dean of the School of Statistics.

Albert Bariho, the UBOS Team Manager, told SoftPower News that they beat the School of Statistics 1-0 to lift the cup. The goal was scored by the team captain Ssemwogerere.

“UBOS (sports team) is committed to participating in sports activities to promote the image of the bureau and ensure the fitness of the staff at large,” Bariho said, adding that they have been participating in Rotary Cancer runs and the Corporate League, among others.

The team captain Ssemwogerere told SoftPower News that they have not only been participating in marathons since 2013 but also performing well.

The Corporate League 2022 will come to an end this Sunday, November 27 at Makerere University Business School (MUBS) Arena- Nakawa. 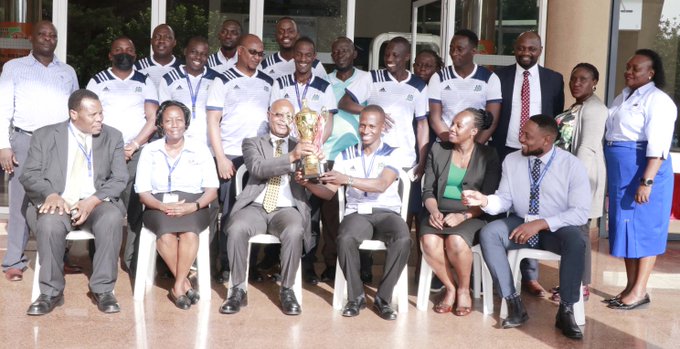 “The league will climax with an awarding dinner on Friday, December 2 at Hotel Africana in Kampala.”

@UgandaCorporate League games season climax is on this weekend 27/11/2022 @Mubs Arena – Nakawa , come and be part of us and indeed we shall give Value for your time, its an outing sponsored by @DarlingUg#CorporateLeagueUg2022.#WeAreBringingCommunittiesTogetherThroughSports. pic.twitter.com/tZVJp2uVtn