Daddy was one of a Kind, Gen Tumwine’s Children Pour out Hearts

Daddy was one of a Kind, Gen Tumwine’s Children Pour out Hearts

The children of the deceased former Security minister Gen Elly Tumwine on Monday poured out their hearts during the state funeral service of their father held at Kololo Ceremonial Grounds in Kampala.

Daudi A. Tumwine, son of the late Gen. Elly Tumwine, said there is none like him.

According to Daudi, his father was a Child of God, a General of the NRA UPDF, the husband of one, and the father of many, both literally and figuratively.

“Our last 14 days with him were a furnace where my mother, Brenda and others were tested to the core. To see your father look at you and tell you the words you fear most, not with his mouth but with his eyes and, in Daddy’s case, with one eye, is one of the hardest things I have experienced.”

He told mourners that his father taught them that it is never too late to do the right thing.

“Use your intellect to help people on the ground. No one knows everything, and no one knows nothing. The biggest room in the world is room for improvement,” he noted.

In her turn, Cynthia Tumwine, daughter to the late Gen. Elly Tumwine, said one of the best things that she will always hold dear was the chance to work with her daddy on his book, which was a collaboration with Prof. Gilbert, where he was able to document the NRM revolution.

“I was his proof-reader. Daddy was proud of Uganda. He loved its beauty, nature, fresh air, food and the blessings this country has to offer. Daddy was energy. And when we cry, it is not so much that we are grieving the death of our father because we knew he was at peace as he left.”

She said it is more so that they will miss the energy that he was, the presence, smile, laughter and all the good memories.

“From every single milestone as children, there is none that I can think of and not see my father’s face. From when we were born to when we were baptised and confirmed. Birthdays are a very big deal in our family. If it meant that we had to stay up to 1:00 am waiting for daddy to return from his duties, we would stay up.”

“Growing up, we experienced so much for from our father that, as a result, we have turned out to be loving people. Starting from his childhood upbringing, daddy loved cows, most especially collecting the beautiful long-horned cows,” she said.

She revealed that this was also greatly expressed in his artwork and sketches.

“Daddy was one of a kind. Unapologetically himself, unique in expression, passion and values.” 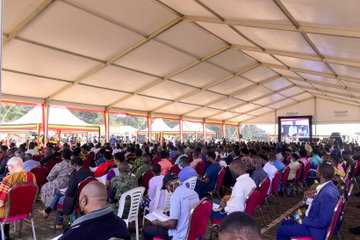